US giant Zynga invests over $2.2B in Turkish gaming market in 2 years 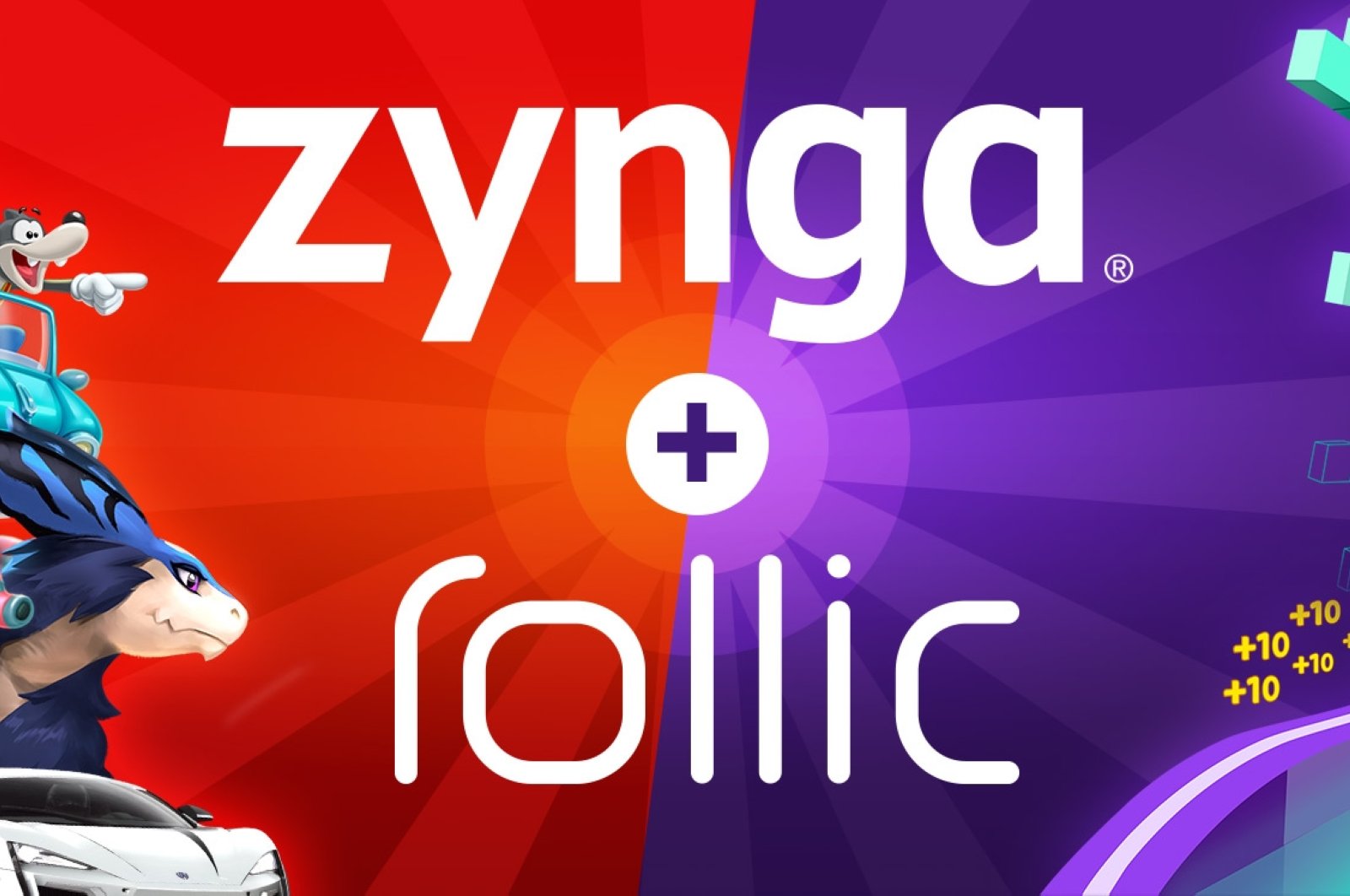 Zynga will acquire the remaining 20% of Rollic at valuations based on specific profitability goals over the next three years.
by Timur Sırt Aug 07, 2020 5:39 pm

Istanbul-based Rollic has managed to become the fastest startup to achieve a sales deal of over $100 million, while Zynga’s high interest made it invest over $2.2 billion in the Turkish gaming industry in just over two years

Gaming startups continue to be one of Turkey’s largest export gates with their sales deals, while they have also managed to turn the eyes of the global venture ecosystem toward the country.

Istanbul-based Rollic, a mobile games developer and publisher with a portfolio of popular hyper-casual games, has been the latest example of this trend and has become the fastest technology startup in the country that has made a sales deal of over $100 million (TL 732 million).

In just about 21 months, Rollic has managed to become the fourth gaming company with the largest sales deal in Turkey after it was acquired by U.S.-based global gaming giant Zynga on Thursday.

Zynga announced it will acquire an 80% stake in the gaming company for $168 million in cash, about two months after its $1.8 billion acquisition of another Turkish gaming company, Peak.

According to the startup monitor startups.watch data, the Rollic has become a venture with the largest sales agreement in the Turkish gaming industry after Peak, Gram and Masomo.

The acquisition shows Zynga’s continued interest in the country’s gaming industry. The giant has previously acquired Peak for $1.8 billion, making it the first Turkish unicorn – a startup company valued at over $1 billion – and Gram Games for $250 million in 2018.

Thus, Zynga has invested nearly $2.22 billion in the Turkish gaming market in a period of just over two years.

Founded by Burak Vardal, Deniz Başaran and Mehmet Can Yavuz in December 2018, Rollic has managed to attract the attention of Zynga, especially with its success in the U.S. market.

Expressing that they are proud to join Zynga, Vardal, the founder and CEO of Rollic, said: “Our expertise in gaming, Zynga's product management, data science experience, advertising monetization and publishing success will contribute to our seamless integration. With Rollic's robust roster of current and new games added to Zynga's portfolio, we look forward to furthering our mission to connect the world through games.”

Zynga’s acquisition of Rollic is expected to be completed on Oct. 1. Over the next three years, Zynga said it will acquire the remaining 20% stake in equal installments at valuations based on specific profitability goals.

The change in payment systems in the post-COVID-19 period is remarkable. Mastercard’s recent research pointed out that cash online shopping positively affects cash flow, while investors' interest in financial technology startups is increasing.

Conducted in 16 countries, including Turkey, the research revealed the increasing interest in local businesses after the COVID-19 period. It showed that local expenditures affected by the quarantine process due to the pandemic increased in the new normalization process, while the lockdown period raised consumers' loyalty to local shops and stores.

In the lockdown process, two out of every three consumers in Europe and almost half of the consumers in Turkey discovered new shops in their immediate surroundings. According to the study, six out of 10 consumers across Europe and in Turkey spent in their neighborhoods to help local shops leave their financial difficulties behind.

Mastercard Turkey and Azerbaijan General Manager Yiğit Çağlayan pointed out that card usage preference increased from 45% to 60% during the pandemic period, pointing to the 15% increase.

“The pandemic and the lockdown process we have experienced have changed the way we shop in Turkey as well as all over the world,” Çağlayan said. “In addition to the huge leaps we have observed in online and contactless spending during this process, another observation is that consumers are turning to local businesses in their neighborhoods. Our SMEs (small and medium-sized enterprises) undoubtedly play an important role in providing goods and services and contributing to the recovery of economies. But during this period, we also witnessed that they took on a complementary and broader role in supporting local people and developing community awareness and spirit. These difficult times have been a period in which loyalty to local businesses has increased in Turkey as throughout Europe. We expect this situation to be permanent.”

Çağlayan also drew attention to behaviors that would become permanent. “The distribution of our work has changed. We see that the share of online transactions in card payments has risen from 17% to 24%. During the pandemic period, it rose up to 29% from time to time. We estimate that this figure will approach 40% within three years. In other words, we expect the increase to reach approximately 38%,” he continued.

He also stressed the increase in the number of people carrying out online transactions for the first time.

“5.8 million people shopped online for the first time. We did an SME research, suggesting that two out of three want to enter electronic commerce. We have developed a solution that will be integrated automatically for those who want to sell from the market places. We see that some of the online payment behaviors are becoming permanent. There was a seasonal effect on electronic payments, but people paid the Motor Vehicle tax online. Traditional retailers need to adapt. Here the rate is around 4%-5%," Çağlayan explained.

Banks are after online customers

He further pointed out that although the internet penetration is high in Turkey, the remote banking service will start to grow with the decision of regulation, further commenting on the upcoming change.

“Banks have to increase their online customer acquisition. I guess it will be possible to gain customers with online banking services remotely with the regulation decisions in Turkey. There is progress in the use of a data matrix instead of ATM. However, we anticipate that there will be rapid progress in online customers. When talking about the card market, credit cards come to mind,” he noted. “Financial access will become important. Payments move money for us. No big change in cash flow. The use of debit cards of both consumers and SMEs has increased. They wanted the flexibility to use the credit or the money in their account. We gained a flexible solution in this matter in supply chain exchange.”

“We see that the agile technology startups, which started with small formations, shaped the world economy. Turkey has great potential in this sense. Startups that anticipate and realize these opportunities and produce the necessary solutions at the right time will start the game one step ahead,” he said.

Özhan also stated that they have invested in various fields, especially in the health, education and energy sectors, with TT Ventures, the first corporate venture capital company of the sector they have established to support startups in the growth stage. Turkish private lender Iş Bank also acquired a payments company Moka Ödeme last week.

In the panels held online by Endeavor Turkey, Ahmet Karslı, founder and CEO of one of the leading fintech companies in Turkey, Papara, was elected Endeavor Entrepreneur, while Qumpara and Twin Bilim (Twin Science) Endeavor became Turkey’s country candidates.

Karslı became the Endeavor Entrepreneur, having passed the Endeavor International Selection Panel, held eight times a year and attended by entrepreneur candidates from all over the world.

Karslı is a successful name that has been involved in many different sectors as an entrepreneur since the age of 17. Papara, on the other hand, grew by an average of 8.8-fold a year and reached 4 million individual users in 2020, aiming to spread financial services to the base and increase financial inclusiveness with simple, fast and easily accessible products.

In the meantime, the founders of Qumpara Banu Ahıska and Nilhan Gür and Twin Bilim founders Asude Altıntaş and Ömer Görgülü passed the Endeavor Local Election Panel and became country candidates. Entrepreneurs will participate as country representatives in the International Selection Panel, which is the final stage in the selection process.

Having continued online without interruption during the pandemic period, the Workup Entrepreneurship Program, run by Kolektif House, of which Iş Bank is the main sponsor, has graduated its sixth-term startups in June.

Thirty-seven startups selected from the applications made to take part in the Workup Entrepreneurship Program made presentations to the participants consisting of Workup mentors and graduates in eight different presentation events held in July. Eighteen startups determined by the votes of the participants were accepted for the seventh term of the program, which will start on Aug. 5.

Workup Entrepreneurship Program, which supports technology-oriented, early-stage startups with a scalable and sustainable business model, has been continuing uninterruptedly since 2017 with the main support of Iş Bank.

Facebook announced that applications have been opened for “Facebook Accelerator: Commerce” trade training, which it has been implemented as part of the global Facebook Accelerator series. The program, which aims to provide virtual training, mentoring opportunities and support to startups in Europe, the Middle East and Africa (EMEA) in the post-COVID-19 period, will also provide access to Facebook's extensive acceleration network.

The program aims to support startups and companies that develop tools to help businesses succeed by selling online and develop solutions to reduce the difference between online and in-store shopping experiences.

Speaking about the program, Facebook Middle East, Africa and Turkey, Regional Vice President Derya Matraş said COVID-19 has once again demonstrated how important small businesses and enterprises are to economies and communities.

“We also saw that during the pandemic, many of these businesses turned to digital in order to survive. Indeed, according to a recent global study we conducted in collaboration with the Organization for Economic Co-operation and Development (OECD) and the World Bank, 33% of SMEs on Facebook in Turkey said that more than 25% of their sales in the previous month came from digital. In this period, when positive e-commerce experience becomes very important, we are very pleased to launch Commerce Accelerator, our virtual program that will enable international cooperation with Facebook teams. Entrepreneurs can follow @FacebookforStartups page,” Matraş added.