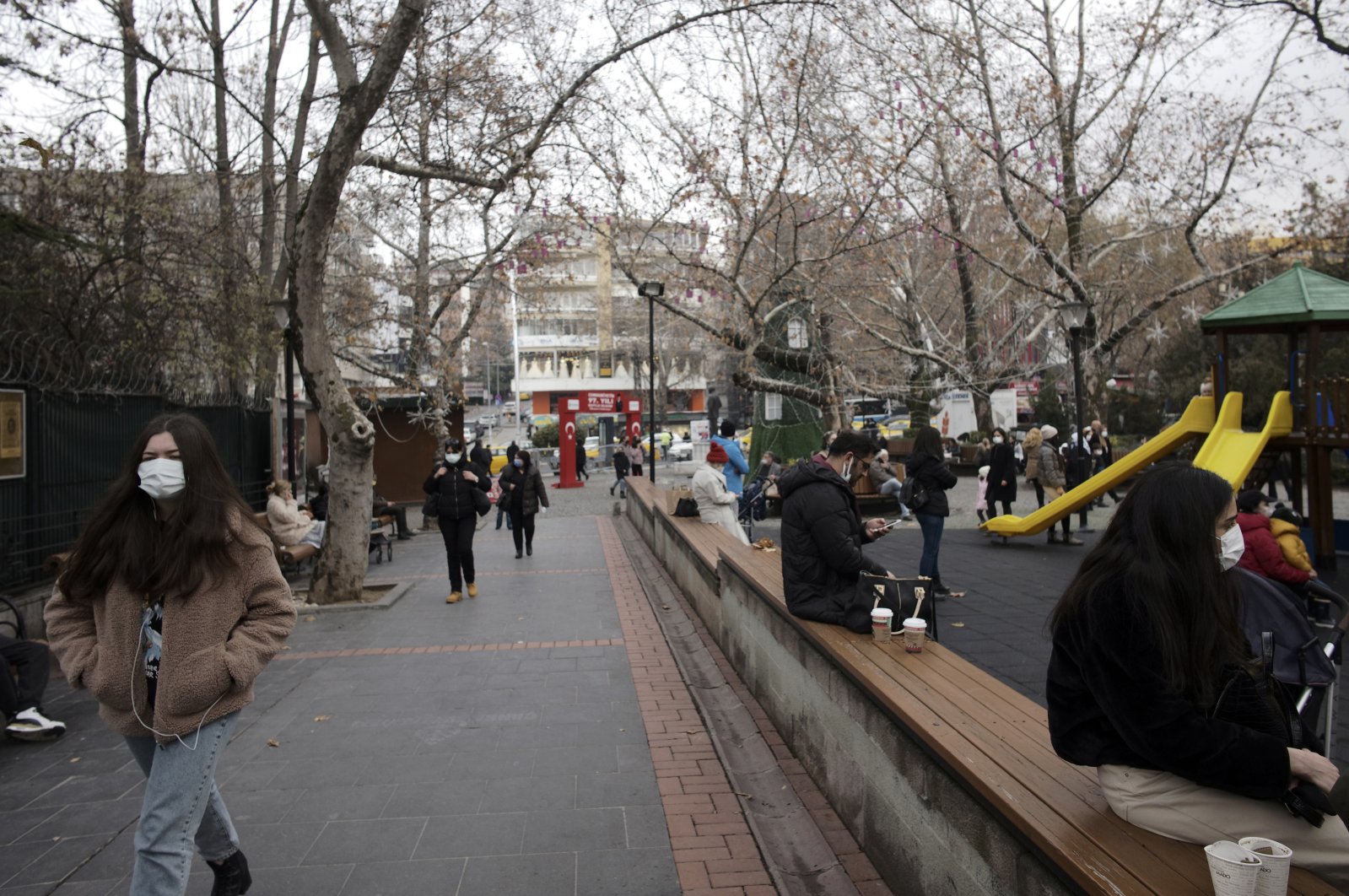 People wearing masks to help protect against the spread of coronavirus sit or walk in a public garden, in the capital Ankara, Turkey, Jan. 6, 2021. (AP Photo)
by DAILY SABAH WITH AGENCIES Jan 12, 2021 4:04 pm
RECOMMENDED

WhatsApp’s latest changes to its usage terms have split locals in Turkey into two, namely those who switched to alternative applications and those who say they will continue using the messaging app despite widespread privacy concerns.

Warning of privacy issues, experts stress that users need to understand “the power of the phone you carry in your pocket.”

Deniz Akdoğdu, 25, said he will close his WhatsApp account.

“There are many points in WhatsApp’s new terms of service that disturb me as well. That is why I am thinking of turning toward different apps,” Akdoğdu told Demirören News Agency (DHA).

For her part, Yasemin Sırık thinks the situation has been exaggerated.

“I do not think it is right to make such a big deal out of it,” said Sırık from the western province of Izmir.

“They were already using our information. If they are going to share data about me, let them. No problem.”

Ahmet Hasan Koltuksuz, a professor at Yaşar University’s Engineering Department, stresses that approaches such as “I have no secrets. So what if they listen to me?” and “What will they do with my information?” are not right.

“We need to understand well the power of the phone you carry in your pocket,” Koltuksuz told DHA.

The remarks come after WhatsApp last week announced it was updating its terms of service and privacy rules, forcing users to agree to let its parent company Facebook and its subsidiaries collect WhatsApp data that includes users’ phone numbers, contacts’ phone numbers, locations and more.

The company warned users in a pop-up notice that they “need to accept these updates to continue using WhatsApp” – or delete their accounts.

The users must accept the changes or see their access to the service cut off starting Feb. 8.

The move triggered widespread criticism across the country and sparked privacy concerns. The company says the changes are related to business transactions and that private messages would not be affected.

Many chose to close down their WhatsApp accounts even though the messaging app tried to assure users that the content of messages would remain encrypted.

President Recep Tayyip Erdoğan’s office and Turkey’s Defense Ministry announced over the weekend that they were ceasing using WhatsApp to communicate with journalists and asked them to download the Turkish messaging application, BiP, which was developed by mobile phone operator Turkcell.

BiP as well as other rival messaging apps such as Signal and Telegram have since seen a sudden increase in demand.

Koltuksuz suggests with the latest agreement, WhatsApp announced that it could sell customer and address information to another institution.

“If accepted, your communication traffic information on the application may be commercially provided to another company. In other words, your information could also be used by other companies,” he warned.

Koltuksuz stressed the company had said earlier that this information was not shared with anyone.

Akdoğdu said unlike many of his friends, he has not received the agreement yet.

“Many of them agreed, either knowingly or unknowingly,” he said. “I will use the app until Feb. 8, and then I will switch to other apps. I will use either Telegram or Signal.”

Akdoğdu stressed he also considers the fact that this agreement is being applied in Turkey and not in European countries as racism.

Facebook has said European and U.K. users would not see the same data-sharing changes. Some have decried the app’s double standard, saying WhatsApp fears penalties from EU countries under data security rules.

Turkey’s Personal Data Protection Board (KVKK) Tuesday announced it had officially launched a probe into WhatsApp, a day after the country’s Competition Board (RK) announced an investigation into the messaging app and Facebook over the new usage terms.

After evaluating whether the issue adheres to general personal data protection legislation, the KVKK decided to initiate a formal review of the app's data processing conditions, data transfers abroad and basic principles.

The board said it would follow the process and reassess the matter on Feb. 8, according to a statement.

In a written statement, the competition watchdog said it had ruled the data-collection requirement should be suspended until the probe is complete.

In a statement to Reuters following the RK’s statement, a spokesperson for WhatsApp denied that the update to its services would impact privacy on the platform, adding that the company remained committed to “delivering secure and private communications for everyone.”

Describing data as the most valuable asset in today’s world, a digital media expert Nabat Garakhanova told AA there is no complete safety on the internet as far as privacy issues are concerned.

Garakhanova, a doctorate holder in digital commutation, said while Facebook does not implement this type of obligation in many countries, such as in the EU, the firm tries to implement data mongering, thus it probably underestimates Turkey and its laws.

“There have been many discussions about the use of the data they have before, but as a requirement of the General Data Protection Regulation (GDPR) in the EU countries and the Personal Data Protection Law (KVKK) in our country, WhatsApp had to obtain permission for the use of our data,” said Garakhanova, who also heads a consultancy firm Mezo Digital.

The social media platform already has users’ data, but it is now trying to use and sell the data for advertisements legally, she added.

Recalling that Facebook was accused of manipulating the votes in the previous U.S. elections, she said that personal data can be used for building perception management.

Garakhanova said Facebook was not implementing the same rules in the EU for fear of getting sanctioned due to the bloc’s precision in protecting personal rights, probably.

Previously, France and the U.K. prevented Facebook from using their citizens' data from WhatsApp, she said. She added that Turkey should also strongly act on a change of privacy rules to apply to these social media companies.

‘Situation is being exaggerated’

Many of her friends have moved on to alternative apps, yet she stressed she does not think it will make much difference.

“The important issue is to respect personal rights,” Sırık said.

Meltem Akgül is also bothered by potential negligence related to the privacy of private life.

“That is why I will delete WhatsApp and use other applications,” said Akgül. “I think it would be very dangerous to share everything with everyone. There are a few alternatives, but I plan to use Telegram.”

Another WhatsApp user, Ozan Kara stressed that social media apps “are not innocent.”

“I currently use WhatsApp. Yet, I think the situation is being exaggerated,” Kara said.

“I have a lot of friends who downloaded other apps, but I keep using it. Because I do not have any secrets. I feel like there is something everyone is afraid of. Such apps were not very innocent in previous years either.”

Erdoğan Konuşkan is one of the users who accepted the agreement without reading it first.

Konuşkan said they have many alternatives.

“I will turn to alternatives if I face any problems. I accepted the agreement, but I did not read it much. I did it because I was groggy when I woke up in the morning,” he said.

He also finds the fact that the terms are being applied in Turkey and not other European countries biased.

“Are we second class citizens?”