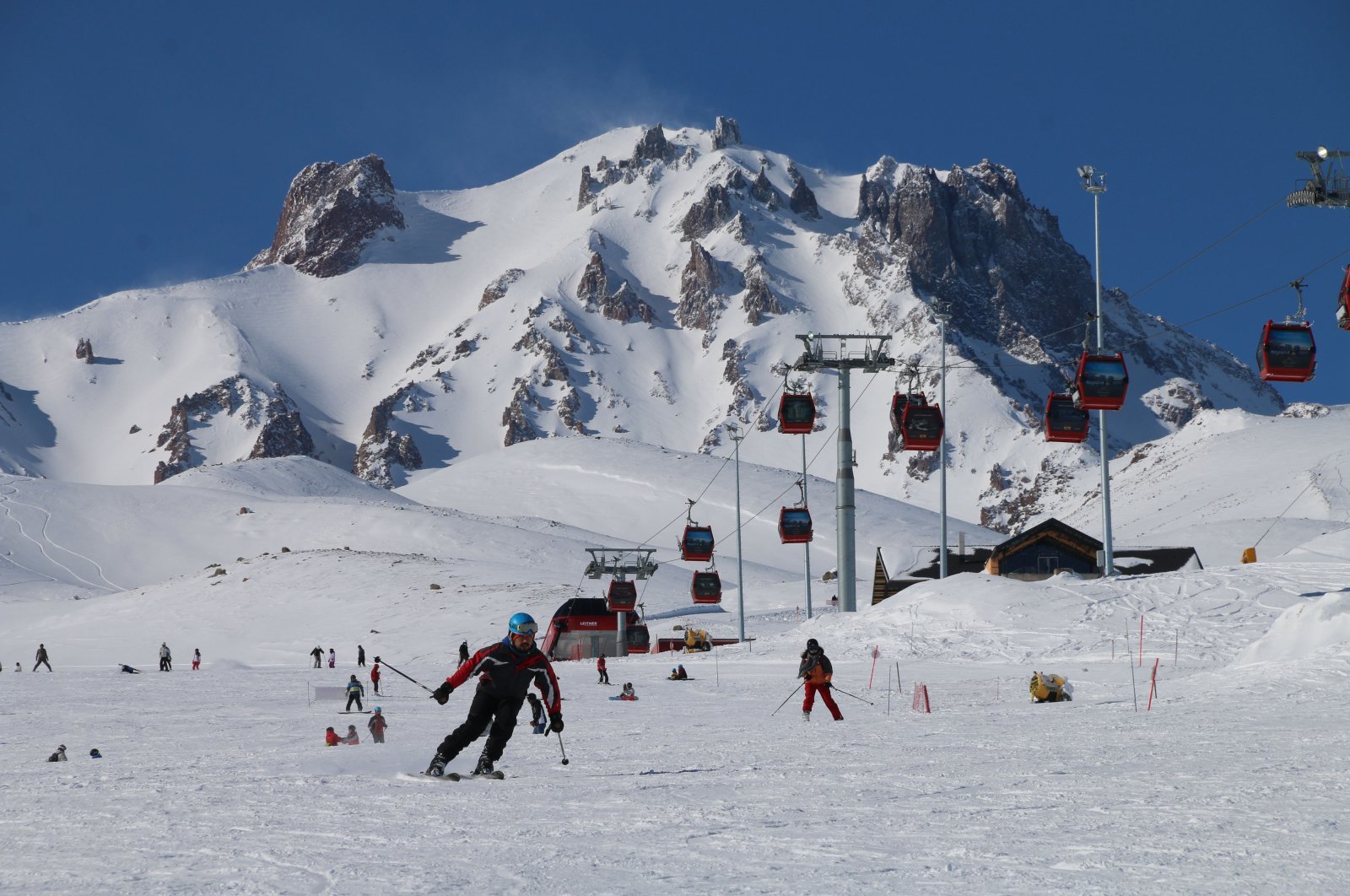 Turkey offers year-round vacation opportunities, depending on the season, with its beautiful shores, ski resorts, history and cultural heritage. This winter season it is set to attract both local and foreign tourists, especially those from Russia, Ukraine and Poland, Turkish Travel Agencies Association (TÜRSAB) Chairperson Firuz Bağlıkaya said Tuesday, adding that some tour operators have already planned charter flights from the countries.

Bağlıkaya told Anadolu Agency (AA) that the charter flights are mainly planned for the winter resort towns of Erciyes and Palandöken in the central Turkish province of Kayseri and eastern Erzurum. Other ski towns are also seeing high demand from abroad, namely Uludağ in Bursa, Kartepe in Kocaeli province and Kartalkaya in Bolu province in the country's northwest.

He said, despite the figures standing at slightly less than in previous years, the demand for winter tourism is set to pick up the pace.

“Turkey stands out in terms of the winter tourism,” Bağlıkaya said, adding that as long as there are no further problems related to the pandemic, charter tours are scheduled to start Dec. 18 and will continue until March-end.

“Uludağ Ski Center, which mainly attracts domestic visitors, is now seeing demand from Russian and Ukrainian tourists. Last year, some 350,000 visitors stayed at Uludağ, and it hosted a total of 1.1 million visitors along with the one-day visitors,” he said, emphasizing that Palandöken Ski Resort, located on Palandöken Mountain in the eastern province of Erzurum, reached 80% occupancy last winter season thanks to bookings from Russia and Poland.

“As of Dec. 27, two charter flights will be made weekly from Moscow to Palandöken,” he added.

Palandöken’s slopes are the longest and highest in Turkey, situated nearly 2,000 meters above sea level.

Bağlıkaya added that Kartalkaya Ski resort is reporting high demand and good sales, with their occupancy rate expected to be around 80% this winter. Some 1 million people visited the resort last year.

Bağlıkaya on world tourism during the pandemic said COVID-19 travel restrictions and border closures resulted in international travel decreasing by 70% in the January-August period of this year. Citing United Nations World Tourism Organization (UNWTO) data, he said that 700 million people opted not to travel in the period compared with normal circumstances, causing a $730 billion (TL 5.81 trillion) loss in revenue.

He said that in Turkey, the decline was recorded as 72% with 13.6 million vacationers visiting the country in January-October.

“Some 11.2 million of this figure was consisting of foreign tourists,” he said, noting that Russia, Germany, Bulgaria, Ukraine and the United Kingdom were the top five countries sending vacationers to Turkey.

“The tourism revenues obtained from foreign visitors, meanwhile, decreased by 69.4% year-on-year in the January-September period of 2020 and stood at $8.1 billion from $22.1 billion in the same period of 2019,” Bağlıkaya said, adding that they expect to close the year with some $10 billion in revenue and 15 million visitors.

Bağlıkaya who stated that tourism revenues corresponded to some 96% of the foreign trade deficit in 2019, stressed that they were expecting the same this year; however, unfortunately, this year’s figures negatively affect the current account deficit while making an upward contribution to unemployment.

Bağlıkaya also commented on the TÜRSAB campaigns to help facilitate domestic tourism. He said TÜRSAB members launched early booking campaigns offering 50% discount options starting this November, adding that domestic tour packages with zero interest up to 15 months, as well as the option to postpone for three months, are viable options for local vacationers.

Cancel and return options are available in the early booking tour packages, he said, up to 72 hours before the starting date in domestic tours and 21 days for the international tours.

He added that with the application of possible COVID-19 vaccines, world tourism can speedily pick up starting from the 2021 summer period. The demand is expected to be even greater in the summer period once the virus threat is eliminated since people are fed up with staying indoors.

Bağlıkaya, meanwhile, noted that the precautionary measures taken in Turkey, from airports to hotels, will continue to be applied throughout 2021.

Bağlıkaya went on to say that if a vaccine is quickly rolled out throughout European cities it will positively impact the Turkish tourism industry as European countries are major markets for the local sector.

The TÜRSAB chair added that since tourism is among the most severely hit sectors in the pandemic, it requires different solutions in order to recover.

Pointing out that more practical support initiatives are needed for the sector to bounce back starting from 2021, he said that the support should cover both sides of the industry – the tourism agencies and the vacationers.