Coronavirus to sweep decade of hard-won gains in Greek tourism 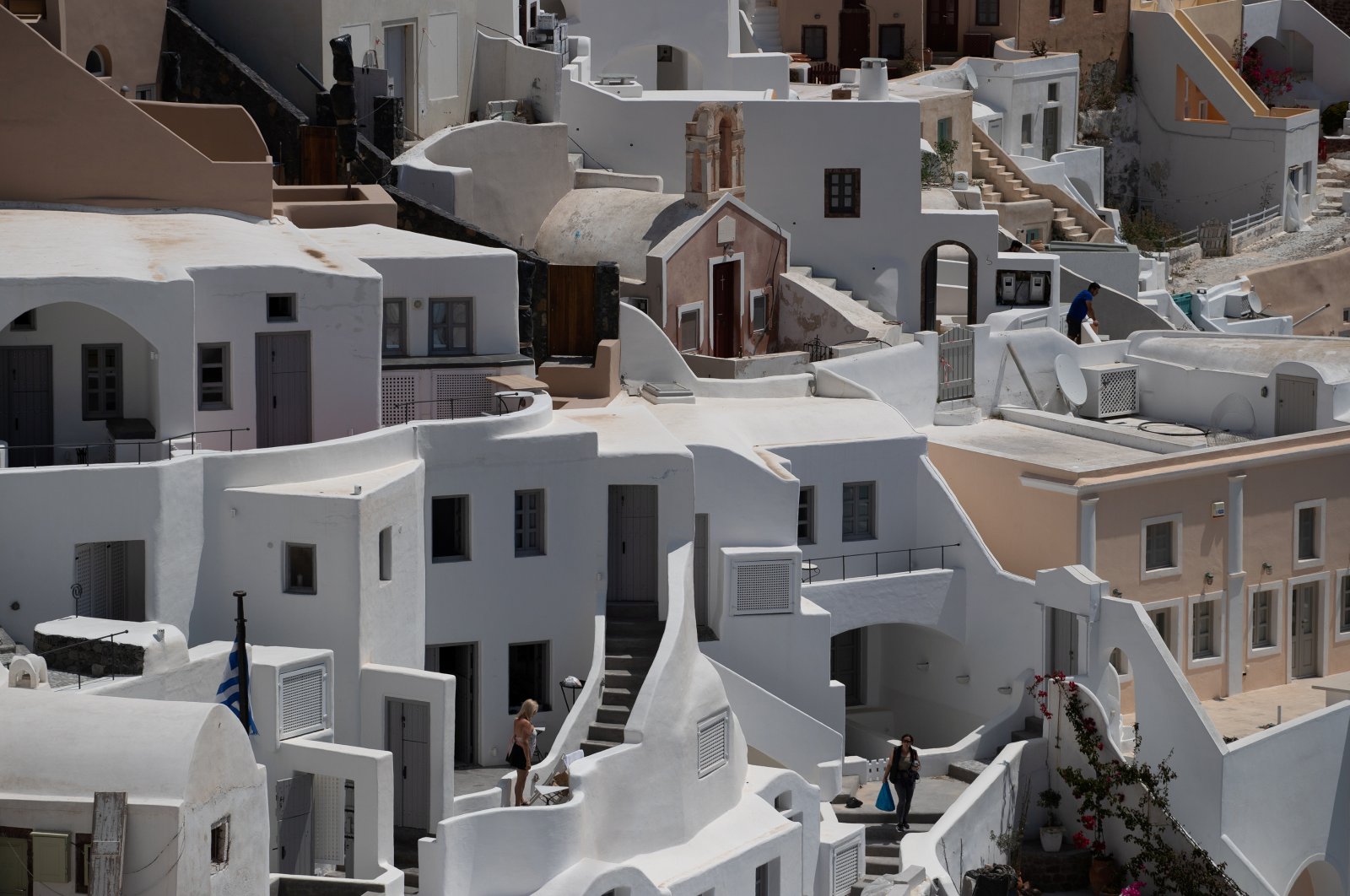 Locals make their way in deserted Oia, a popular touristic hotspot before the coronavirus outbreak, on the island of Santorini, Greece, May 7, 2020. (Reuters Photo)
by REUTERS May 11, 2020 1:21 pm
RECOMMENDED

About now, Charlie Chahine should be welcoming his first international guests of the season to his Suites of the Gods resort on Santorini, Greece's most popular holiday island.

A few of his staff of 30 would be serving poolside cocktails as guests drink in the island's famous sunset, his hotel becoming a little busier every day as summer approaches, bringing 2 million visitors to Santorini's cliff-edge shores.

"The situation now is at zero, nothing is moving. How will tourists get here without airplanes? In a submarine?" says Chahine. Around him, the whitewashed buildings of Fira, the island's main settlement, are a ghost town.

With tourism paralyzed by the coronavirus pandemic, Chahine has cut his staff to just eight and fears the season will be much worse than even 2015, when Greece was forced to close its banks and impose capital controls to avoid bankruptcy.

"This time last year, we had 12 cruises and more than 15 ships stopping over in Santorini. Now, we see a ship every three days," he said, looking out across the empty Aegean Sea.

The pandemic threatens not only to rob Santorini of income and jobs; it risks sending Greece, whose tourism industry makes up a fifth of the economy, sliding back toward the dark days of the eurozone crisis a decade ago.

If tourism is a wipeout this year, some economists say, the economic and financial gains born of years of austerity and three international bailouts may unravel.

"This time, the expected shock will be much bigger than serious jolts in the past," said Nikos Magginas, chief economist at Greece's National Bank.

The economy is forecast by the European Union to shrink by 9.7% this year, almost a percentage point more than in 2011, its worst year of the debt crisis, with unemployment projected to rebound to around 20%, back to where it was two years ago.

Greece's sovereign debt is expected to balloon out to almost 200% of economic output, more than undoing the gains earned through the painful public spending cuts that the eurozone and International Monetary Fund (IMF) demanded as the price for bailouts.

This time, though, there is little Greece can do.

Though it has one of Europe's best records at handling the pandemic, with 2,678 coronavirus cases and 148 deaths, its tourism industry relies overwhelmingly on overseas visitors, especially from Europe, the U.S. and China.

Views are mixed on just how hard the pandemic will hit the economy. With the European Central Bank ensuring that Greece can continue to borrow at affordable interest rates, the government predicts an economic contraction of between 4.7% and 8.9%.

"I think the deterioration will prove temporary because Europe is reacting," Bank of Greece Governor Yannis Stournaras told Reuters. The bank sees a contraction of up to 4% this year under its baseline scenario, and 8% at worst.

"There are encouraging signs that its response will be commensurate to the measures announced by the ECB."

Though economic forecasts vary greatly, all agree that Greece's success or failure in drawing foreign tourists to its shores this summer will determine just how bad it gets.

"We are like farmers praying for rain, desperately hoping for some activity to carry us through the winter," said Tasos Mylonas, 58, the owner of a small hotel in Paros, a popular island in the Cyclades. All his bookings have been canceled.

"So far I have been looking at a big, fat zero – but the bills keep coming," he said.

Mylonas, along with the rest of the tourism industry, hopes that overseas lockdowns will continue to ease and flights can begin to pick up shortly.

The government is focusing its efforts on attracting European visitors and counting on Greece's success so far in containing the epidemic to reassure visitors that they will be safe.

"This season is not going to be like the other years," Tourism Minister Harry Theoharis told Reuters. "I'd be a fool to believe this could ever be the case."

He said Athens was pushing for common EU rules on how to keep tourists safe from contagion when they travel: a set of protocols that would mean they need not go into quarantine, either at their destination or when they return home.

And they must be able to unwind at the beach, and not constantly worry whether the person under the sunshade next to them has come from a place with a high infection rate, he said.

Even if there is a big pick-up next year, the tourism industry expects it will be years before it generates anything lie the 18 billion euros ($19.48 billion) it made last year.

"To be realistic, 2021 will be a year of recovery – but we will not be able to attain the revenue of 2019 before 2023," said Yannis Retsos, head of the Greek Tourism Confederation.

Of the 700,000 who worked in the sector last year, many may never get their jobs back.