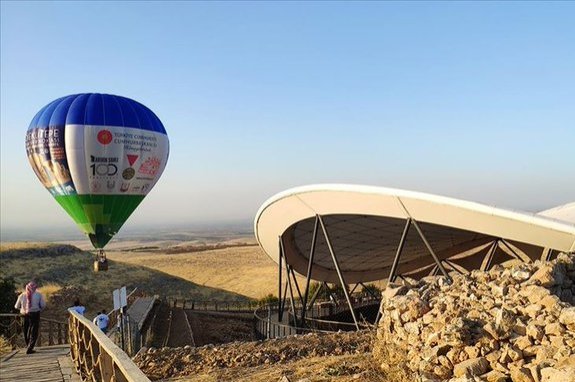 Hot air balloon tours at Göbeklitepe, an archaeological site in southeastern Turkey's Şanlıurfa province, will begin now that the necessary permits have been granted by the Directorate General of Civil Aviation (SHGM), the aviation authority said in a Twitter statement Tuesday.

The ancient marvel, dubbed ground zero of human history, was added to the UNESCO World Heritage List in 2018 and has been attracting both domestic and foreign tourists ever since.

Noticing the increased number of tourists visiting the region, the provincial governorate along with the Culture and Tourism Provincial Directorate initiated the hot air balloon project inspired by the concept's success in central Turkey’s Cappadocia.

Following a series of test flights carried out at the archeological site in September, the SHGM permitted the commercial tours, it said in the statement.

The tours will be arranged by the Ezel Aviation company, which was established in 1990 and was the first company to introduce hot air balloon tours in Cappadocia and central Nevşehir province.

The tours in the touristic Cappadocia region in central Turkey were initially halted on March 17 due to the COVID-19 outbreak but resumed on Aug. 22.

Approximately 600,000 tourists participate in the tours yearly, according to data by the Transportation and Infrastructure Ministry. About 50,000 tourists took in the views at Cappadocia at the beginning of this year before the tours were suspended in March.

Meanwhile, Göbeklitepe, which closed its doors to visitors for three months this year due to the outbreak, was the most visited archeological site on a virtual museum application launched by the Culture and Tourism Ministry during the pandemic. Some 1.6 million users virtually visited Göbeklitepe in two months after the application went into service on March 25. Göbeklitepe reopened to visitors on June 1.