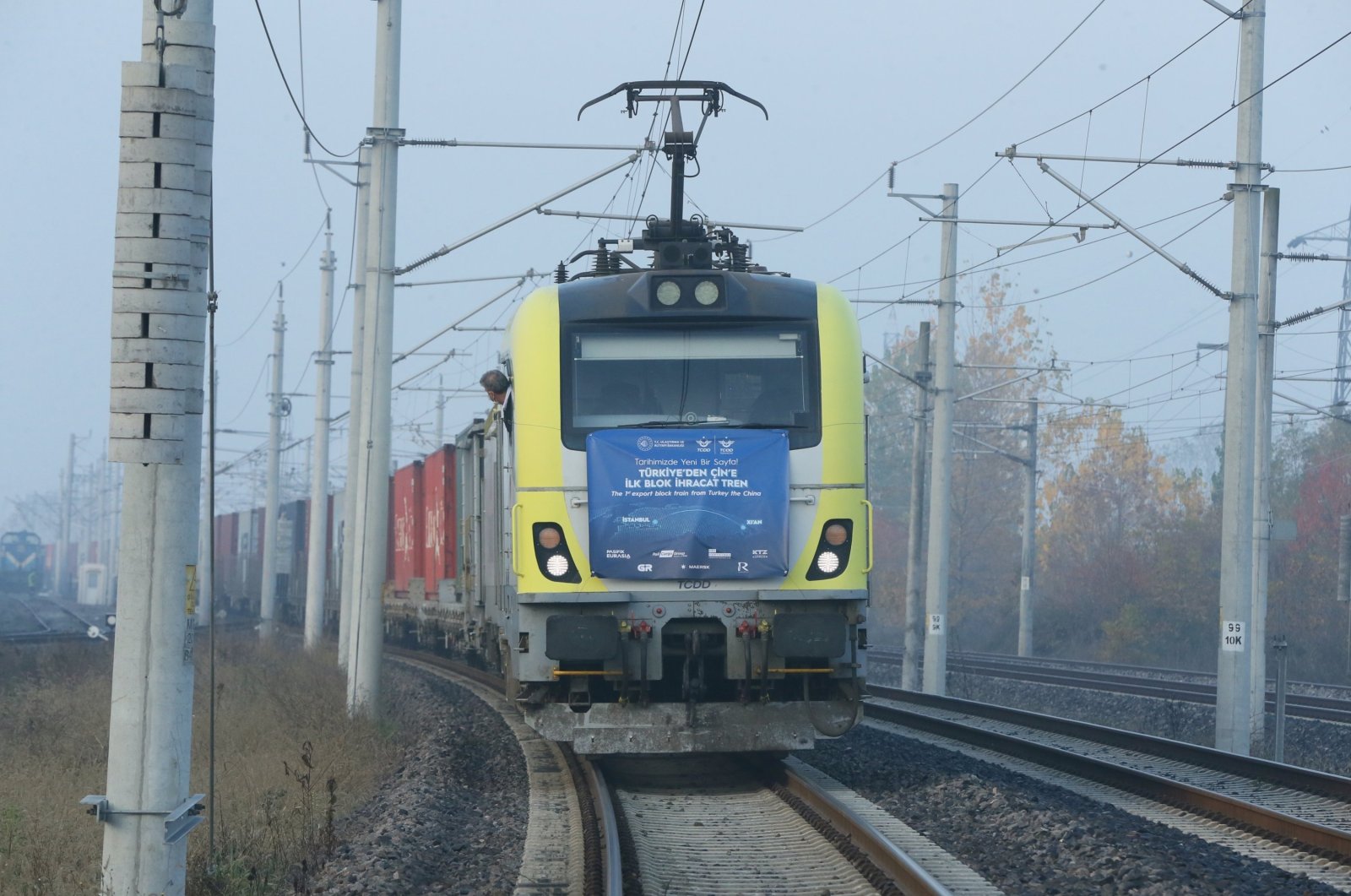 A train carrying goods from Turkey to China departs from the northwestern province of Kocaeli, Turkey, Dec. 6, 2020. (AA Photo)
by Daily Sabah with AA May 10, 2022 2:00 pm
RECOMMENDED

The Russia-Ukraine war and tensions in the region mean trouble along the Northern Corridor for the transportation of internationally traded goods, Turkey’s Transport and Infrastructure Minister Adil Karaismailoğlu said, which makes the Middle Corridor encompassing Turkey a strong cost and time effective alternative.

The Northern Corridor passes through Russia to reach Europe via China but the Middle Corridor, which is also part of China’s ambitious modern Silk Road project, is shorter in distance, also when compared to the southern trade route via the Suez Canal.

"The Middle Corridor is a strong alternative for the Northern Corridor in terms of distance and time. A freight train departing from China to Europe, if it chooses the Middle Corridor and Turkey, travels 7,000 kilometers (4,350 miles) in 12 days. If it chooses this route, a distance of 10,000 kilometers and a travel time of at least 15 days can be saved. If the same train chooses the Southern Corridor, it could travel 20,000 kilometers by ship over the Suez Canal and reach Europe in 45 to 60 days,” Karaismailoğlu explained.

He added that these figures demonstrate how advantageous and secure the Middle Corridor is in global trade between Asia and Europe.

Speaking at the General Assembly of the Trans-Caspian International Transport Route Union, the minister said that ancient civilizations were established by nations that forged and operated important trade routes for their commercial benefit.

The King's Road, which starts from the west of Anatolia, continuing to the east and extending to the Persian Gulf, the Spice Road from the Far East to Europe, and the Silk Road from China to Europe prevented trade from being limited to a certain region throughout history, he said.

Karaismailoğlu stated that these routes helped trade spread to different continents and around the globe.

The minister highlighted that the historical Silk Road has been revived under the Iron Silk Road and the aim is to develop, facilitate and increase the volume of trade between Asia and Europe thanks to new infrastructure and transportation investments.

He also emphasized that Turkey has preserved the advantage of its location for centuries as the country sits in the middle of three continents and at the intersection of important water basins such as the Black Sea and the Mediterranean.

“Turkey has always been on the route of many important trade routes. Our country is at the center of the geography that includes $38 trillion of gross national product and $7 trillion of trade volume,” he said.

Karaismailoğlu said that Turkey has been making significant investments for a long time to become a global logistics superpower in the Middle Corridor, which covers 4.5 billion of the world's population and 30% of the global economy.

Emphasizing the great importance Ankara attaches to the Trans-Caspian International Transport Route Union, which helps Turkey increase its potential, Karaismailoğlu went on to say that “the union facilitates trade in the Trans-Caspian region with its decisions and practices, increases the mobility of goods and the attractiveness of the Middle Corridor.”

Turkey has increased its efficiency in the Middle Corridor with the Baku-Tbilisi-Kars (BTK) railway line, he noted, adding that 1.7 tons of cargo have been transported as of the end of April since its opening in October 2017.

“Our main goal for the Baku-Tbilisi-Kars route is to operate 1,500 blocks of trains per year and to reduce the 12-day travel time between China and Turkey to 10 days,” he added.

Emphasizing mobility will be increased along the Middle Corridor with seaport connections in addition to railways, Karaismailoğlu said, "With its opportunities, the Middle Corridor will undoubtedly be one of the most important links of world trade with the coordinated cooperation of the countries of the region."

More importance has been given to the railway due to the transformation in global trade routes, Turkey's future goals and the significance placed on the railway within the framework of the Green Agreement aiming at a carbon-neutral Europe by 2050, Karaismailoğlu said. Within the framework of the Transport and Logistics Master Plan, the share of railways in transportation has increased from 5% to 22%.