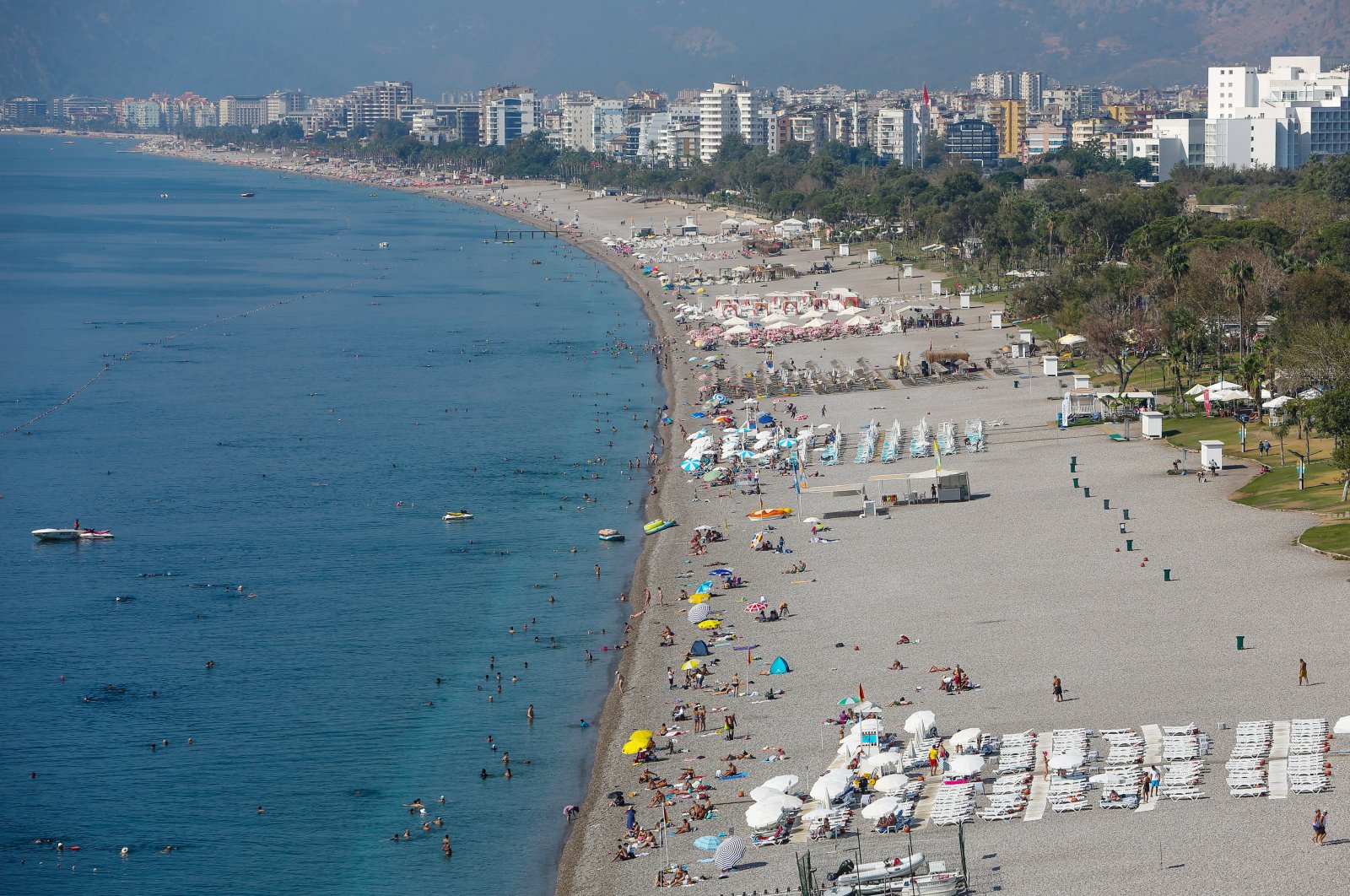 As Russian tourists await the resumption of flights, Antalya Airport has seen the arrival of more than 10,000 tourists in a single day for the first time since the beginning of the pandemic

Russian tourists are waiting for the resumption of flights to Turkey to return to the country’s Mediterranean resort city of Antalya and enjoy the rest of the summer holiday.

Irina Balcı, the president of the Russian Art and Culture Association, is one of the representatives of hundreds of Russian citizens who have settled in Antalya. She told Anadolu Agency (AA) on Tuesday that a significant number of Russians are waiting for the flights to return to the city, after air travel was suspended March 28 due to the coronavirus pandemic.

"Russian holidaymakers have packed their luggage and are waiting," she said.

Balcı said many Russian tourists have already started making reservations for the upcoming weeks and most of them deem the city as a safe place during the coronavirus pandemic due to the low number of cases there.

"Antalya offers diverse tourism activities for holidaymakers. It is not just about five-star hotels, the sea, the beach and the sun. The city offers culture, sports and religious tourism,” she said.

Anton Orlov, a Russian citizen who settled in Antalya two years ago, also said a great number of Russians want to spend the rest of the summer in the city.

"We don't just shut ourselves inside hotels here. It is a very rich city in terms of historical and cultural tourism, making us learn something new every day. It is also an ideal city for adventure lovers," Orlov told AA.

Ivan and Lena Vinogradov, also Russian residents, said they were among many other Russians who decided to settle in the city after spending summer vacations there.

Noting that many of her friends and relatives were not able to travel to Turkey due to the pandemic this year, Lena Vinogradov said they will be rushing to airports once the flights begin.

The Russian market is key for tourism operators, as Turkey remains a favorite among Russian tourists despite the political ups and downs between the two countries.

Russian citizens accounted for 15.6% of all arrivals in Turkey in 2019, according to the Culture and Tourism Ministry. More than 7 million Russians visited Turkey last year, it said.

Their top travel destination was the resort city of Antalya on Turkey’s southern Mediterranean coastline. The city hosted more than 5.5 million Russians last year, accounting for 35% of the total tourists visiting the city.

They also accounted for 7.3%, or over 130,600, of all foreign tourists who came in January of this year; however, most prefer to come after May.

As Russian waits for air travel to resume, tourists from other countries have begun to arrive on the Mediterranean coast after monthslong lockdowns and travel restrictions. On Sunday, the Antalya Airport saw the arrival of more than 10,000 tourists for the first time since the beginning of the pandemic.

Twenty-three flights from Ukraine, 18 from Germany, four from Switzerland, three from the U.K., two from Serbia, two from Belarus, and one flight each from Moldova, Austria and Kazakhstan arrived at the airport Sunday, Yavuz said.

He added that arrivals from Western Europe mostly consisted of Turkish expatriates, noting that some Europeans were still wary of traveling to the country due to the travel warning issued by the EU Council.

The travel warning against Turkey by the EU and the German government has been a sticking point since the easing of lockdown measures across Europe.

The German government last month decided to lift its global travel warning only for EU member states and Schengen-associated countries, namely Iceland, Liechtenstein, Norway and Switzerland, but extended it for all the other countries, including Turkey, until the end of August.

Furthermore, in a list unveiled last week, the EU decided to exclude Turkey, along with the U.S. and other countries, from a list of 15 countries recommended for nonessential travel. Ankara called on the bloc to correct the "mistake" as soon as possible, citing its measures taken to combat the pandemic as well as its efforts and successes.

Turkish authorities have described the decision as "disappointing" and have called on the EU to modify its stance. Foreign Minister Mevlüt Çavuşoğlu said there was no "scientific reason" behind the travel warning against Turkey.

In the wake of the pandemic, the Culture and Tourism Ministry launched the Safe Tourism Certification Program in partnership with the Foreign Ministry. The program covers a broad range of safety measures in transport, accommodation and hygiene, both for hospitality employees and tourists, according to the Tourism Ministry.

The program, which has been certified by international bodies, validates the execution of high-level health and hygiene requirements by airline companies, at airports and other transportation hubs, as well as in accommodation outlets and food and beverage facilities.