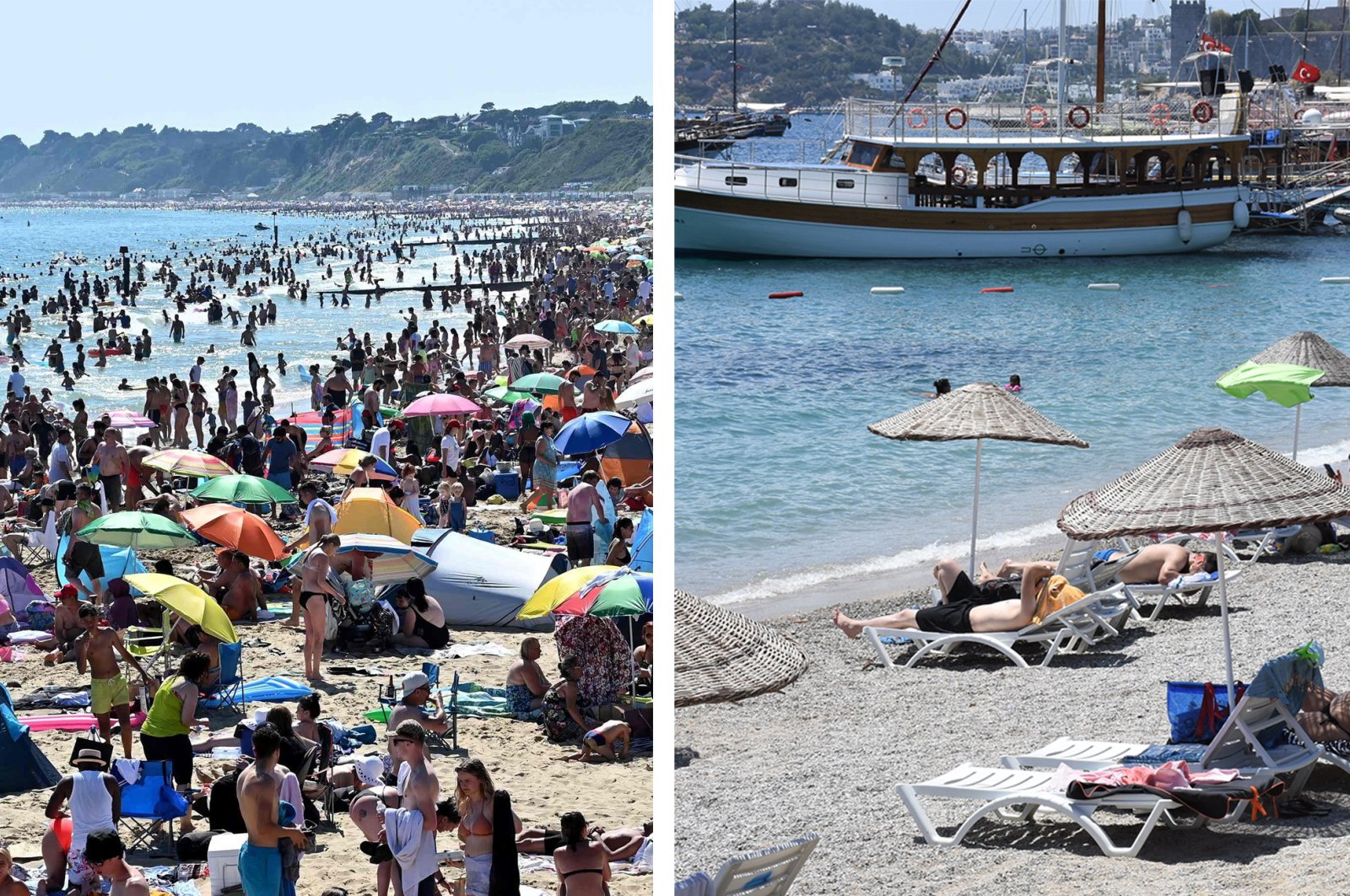 As the tourism season starts to begin, the stark difference between the beaches of Turkey and the U.K., in terms of the social distancing, draws major attention in social media. (PHOTOS BY AFP-AA)
by DAILY SABAH
Jun 25, 2020 6:45 pm

In the age of the coronavirus and social distancing, the stark difference between beaches in Turkey and the U.K. has made headlines in Turkish mainstream and social media.

Due to the pandemic, health care safety and anti-coronavirus measures have become the number one priority for the global tourism industry. As a result, social distancing has become the main focus, to keep infections rate at bay.

However, as the U.K. witnessed its hottest day of the year so far on Thursday, pictured emerged of sea beaches cramped with people, showing no regard for social distancing rules.

The U.K. is one of the worst-hit countries in Europe and scenes of overwhelming crowds at beaches, particularly at Bournemouth beach on the country's southern coast, caused massive outrage on social media and many feared worried a second wave of the pandemic may be on the way.

Although the local authorities have asked people to avoid such gathering, experts say similar scenes are likely to reoccur as the measures in the U.K. were not enough to provide safe vacation spots.

Meanwhile, social media users were quick to point out the shocking difference between the sea beaches in Turkey and the U.K.

In the wake of the pandemic, Turkey's tourism industry has taken steps to maintain health and safety standards, social distancing rules and avoid overcrowding. The Health and Tourism Ministries have backed up the industry with the Healthy Tourism Certification program, making it easier for tourists to choose and pick their favorite holiday destinations, enjoy the sea and the sun with peace of mind.

As the contrasting pictures of sea beaches from both countries made the rounds on social media, some users even questioned the German government's decision to put the U.K. on the safe vacation spot's list, unlike Turkey.

Some found the decision plain absurd. "The picture on the left is a current picture from the U.K. German government declared the beach on the left safe for its citizens. The picture on the right is from Turkey. Designed to adhere to social distancing rules. German government finds this dangerous," wrote one Twitter user as they mentioned German Foreign Minister Heiko Maas.

Turkish authorities have already described Germany's decision as "disappointing" and called on Berlin to change its stance.

Foreign Minister Mevlüt Çavuşoğlu said Saturday that there was no "scientific reason" behind the travel warning against Turkey.

Turkey is the third most popular holiday destination for Germans after Spain and Italy. In 2019, Turkey hosted more than 5 million visitors from Germany, an 11.4% year-on-year increase, according to government data.

In line with the gradual easing of restrictions imposed to stem the tide of the coronavirus pandemic, Turkey has started to receive new holiday bookings, with tourism industry representatives targeting a 70% occupancy rate for July.

Turkey has allowed for the reopening of hotels and other touristic spots, resuming domestic flights and intercity travel last week. The country slowly opening its doors to foreign tourists as of mid-June.

Hotels around the country continue preparations, in line with measures prescribed by the Culture and Tourism Ministry. Most have redesigned their facilities to ensure social distancing at buffets, beaches, lobbies and pools.

Turkey ranks sixth globally in terms of tourist arrivals, with the sector accounting for around 12% of the nation's economy. The number of foreigners visiting the country plunged 51% on an annual basis to 4.3 million from January to April this year. According to the Culture and Tourism Ministry data, this was down from 8.7 million in the same period last year.

The Healthy Tourism Certification program aims to convince travelers that despite the pandemic, Turkey’s beaches and historic treasures will be safe to visit this year, with rigorous checks on airlines, local transport and hotels.