Tourists in Turkey: We are even upset to return home 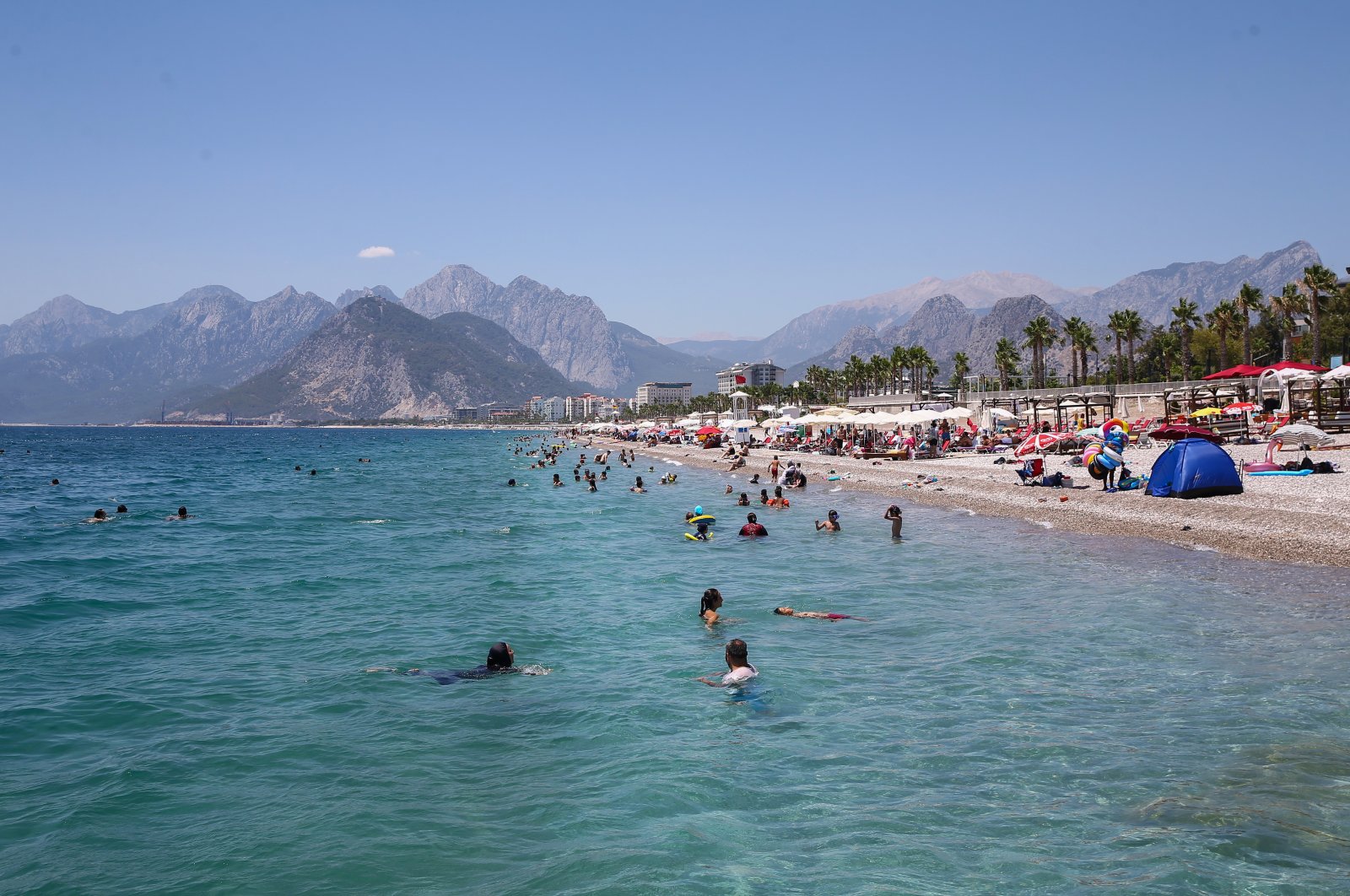 The first groups of tourists to visit the country's Mediterranean coast after travel bans were lifted say they felt very safe due to the high-level measures to fight the spread of the coronavirus everywhere they went, from airports to hotels and beaches

Hotels in Turkey’s popular touristic destination Antalya province on the Mediterranean coast are reopening their doors after halting business due to restrictions during the COVID-19 outbreak. Some 285 establishments in the province applied for the “Heathy Tourism Certificate” that was created by Ankara to revive the sector. It prioritizes both the customers' and employees’ health, and some 180 hotels have already been granted certificates by meeting a series of measures.

Meanwhile, the first tourists to arrive as of July 1 gave positive feedback on their visit, noting that they felt very safe, preferring the Turkish coast over European holiday resorts.

Yana Osipova and Kirilo Osipov, a couple from Ukraine, said that this was not their first holiday in Turkey and that they already know the “quality is very good here.”

Saying that they closely followed the pandemic in Turkey, the couple said the country worked in a very disciplined manner and that when they came here, they “found Turkey even more reliable than Ukraine.”

“Disposable masks and glasses are provided at the hotel. The staff is very well trained. Everything is perfect, so we were not afraid at all. There is no decrease in the service we receive,” Osipova said, noting that she has a blog and that she is recommending Turkey to people through her posts.

Ukrainian Foreign Minister Dmytro Kuleba was the first guest minister to visit Antalya since the start of the pandemic.

Around 1,500 tourists arrived in Turkey’s most popular Mediterranean destinations from Ukraine in the first phase of the resumption of charter flights last week. Local operators said the arrivals do not account for even 10% of the last year’s figures, but they expect things to get busier after mid-July when the flight frequency increases. Last year, more than 1.5 million Ukrainian tourists visited Turkey.

Ihor Sihora, another Ukrainian tourist visiting the Mediterranean resort city, said that “it is impossible not to rely on utmost measures taken in Turkey.”

“We encountered service beyond our expectations,” he said, noting that the hotel was monitoring temperatures with thermal cameras and that “this gave us greater confidence and comfort. We never felt psychological pressure due to the pandemic. All measures have been taken, but they do not bother you. We suggest to all our friends a holiday in Turkey.”

Vita and Daylo Cherednychenko said that they had not been nervous at all when coming to Turkey, but the situation in Europe upset them as the number of cases was very high and news about senior citizens dying in care homes is everywhere. “My sister lives in Spain. She invited us, but we prefer to come to Turkey,” Cherednychenko said, adding that for families with children, Turkey is a perfect place for a holiday. “Our friends in Europe would like to come to Turkey, as well. They are waiting for the quarantine applications to be lifted.”

Another Ukrainian couple, Alena and Vlad Gubka, said that they are very upset that they are now leaving Turkey. “Hotels have taken very good precautions. We had a holiday in Ukraine, but we were very nervous there,” they said, noting that the sea in here is very clean. “This has always been the case, but it has reached its peak in the pandemic. This gives you even more confidence,” the Gubka couple added. “We were planning a vacation in another country in August, but we decided to come here again.”

Hoteliers expect the sector to gain momentum, especially in August. Mediterranean Touristic Hoteliers Association (AKTOB) Chairman Erkan Yağcı said that apart from the 285 hotels that applied for the certificate, there are more that are preparing to apply.

“More than 120 hotels have already opened their doors. We hope that 400 hotels will be opened in Antalya this year,” he said.

Kaan Kavaloğlu, the Limak Holding Tourism Group's chairperson, said that in the third week of March when the first COVID-19 case was reported in Turkey, they closed all their hotels, but now they are reopening them one by one with security and hygiene measures.

He said that one of their guests, who wrote a comment to hotel management, said that they did not take such precautions in their own residence and that the “Limak Lara hotel is even safer than our home." This sentence describes the measures the group has taken very well, Kavaloğlu said.

Lara Barut Collection Hotel General Manager Cem Karacan said that they have 463 rooms, but only 245 of them are now being used so they can provide social distancing.

Karacan said that they are even hosting German tourists, despite the fact that Germany has still not lifted its travel ban to Turkey, noting that the government decision couldn’t stop some Germans from coming to Turkey through connecting flights.

Aşkın Kahraman, tourism coordinator at Akka Hotels, said that they have 500 rooms in Antalya’s Kemer, which was closed on March 25 and reopened on June 25. “Today 260 of the rooms are occupied,” he said, noting that most of the customers are either from Ukraine or local tourists.

“We plan to maintain 50% occupancy to ensure social distancing,” he said, highlighting that the company invested TL 2 million ($291,000) to implement measures against the spread of the pandemic.

Travelers at Turkish airports can do most things without human contact including purchasing tickets online or from kiosks at the airports to luggage delivery. Passengers' temperatures are continuously being checked with thermal cameras, and planes are loaded according to seat numbers to prevent bunching and to apply social distancing rules.

To implement the additional measures included in the country’s “health tourism certificate,” the hotels in Antalya are said to have invested between TL 200,000 to TL 1 million each.

Masks and gloves are offered free of charge upon arrival, though customers do not have to have them at hotels except in common areas such as the lobby and restaurants. There are disinfectants that one can easily reach at many points within the facilities. In areas such as the pool, beach, sun loungers, restaurants and cafes, tables are set according to the social distancing rules. There are warning boards about social distance and hygiene at many points and glass screens at hotel restaurants where the open-buffet option is still offered to customers.

Hotels have taken high-level measures not only for their guests but also for their employees. Special training for all staff has been provided and guidelines have been applied in personnel spaces.