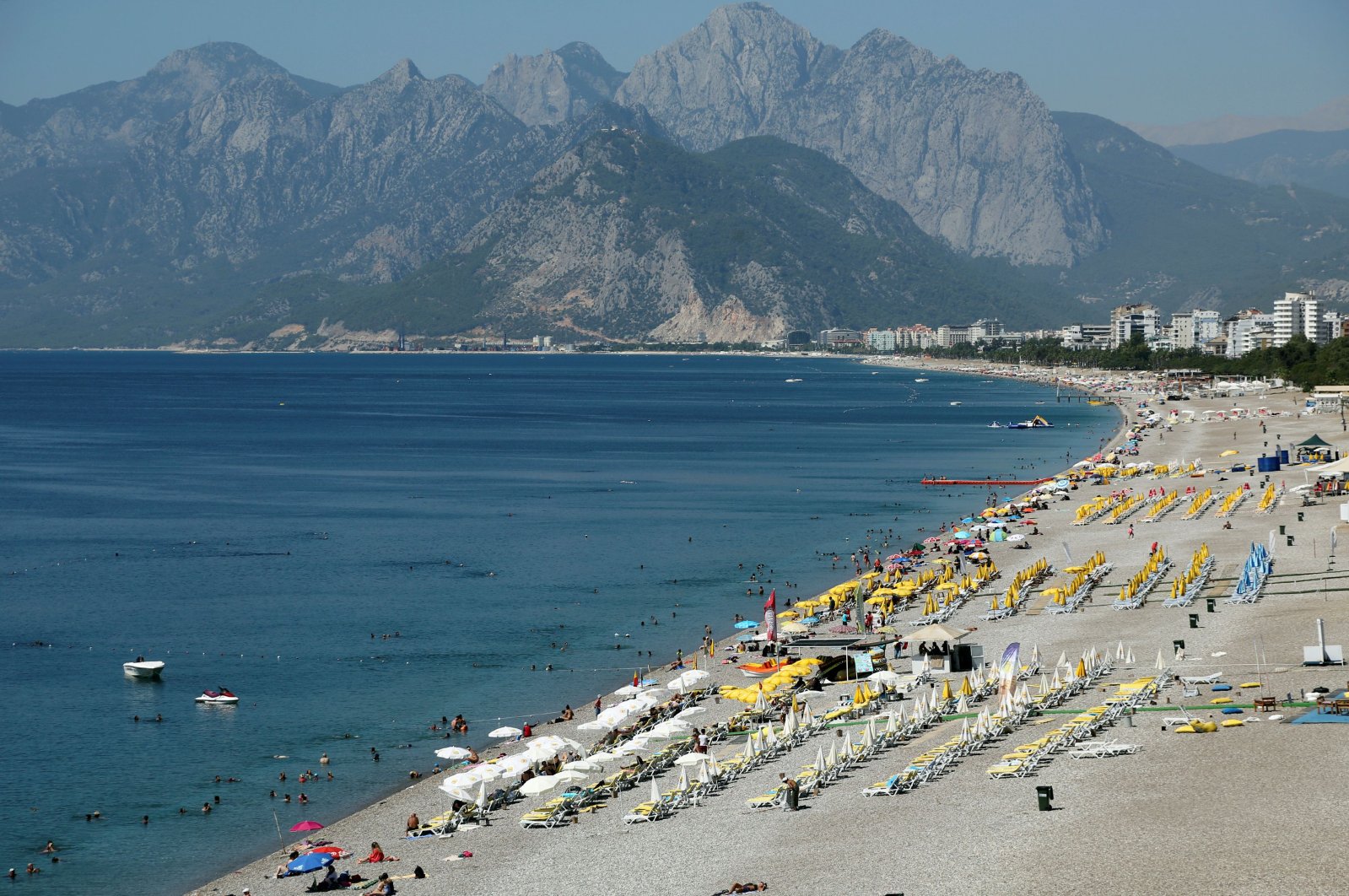 Tourists enjoy a beach in the Mediterranean resort city of Antalya, a popular destination for tourists, Turkey, July 25, 2016. (Reuters Photo)
by DAILY SABAH WITH AA
May 18, 2020 2:29 pm

Turkey will be a tourism destination that will achieve the fastest recovery among tourism destinations following the coronavirus pandemic, a survey by International MICE and Wedding Forum (IMWF) showed, as countries prepare to gradually restart travel and reopen for tourism.

The travel industry, which accounts for around 10% of global gross domestic product (GDP), has borne the brunt of the damage wrought by lockdowns to contain the coronavirus as nations sealed borders and planes were grounded.

Countries have been in the recent days revving up efforts to gradually reopen to business and tourism, including Turkey, which hopes for domestic tourism to begin after May 28 if the COVID-19 statistics continue on a downward trend.

The IMWF survey polled 822 firms and 1,468 tourism professionals in 45 countries, including Germany, the United States, Australia, Belgium, France, the Netherlands, Spain, Italy and Russia, looking to bring forth a general opinion of the relevant segment decision-makers and the industry about the aftermath of the pandemic.

Necip Fuat Ersoy, the managing partner of the forum, said the survey was the most comprehensive study prepared in the segment. "We have reflected the estimates and the internal views by addressing the effects of the pandemic in terms of destinations, airlines and customers," Ersoy told Anadolu Agency (AA) Monday.

He noted that 59% of the participants think it will take time for customers to travel abroad for events following the pandemic.

"Turkey came in first with a rate of 12.2% on the question of which tourism destinations, countries could recover in the fastest manner after the outbreak. The sector thinks that Turkey can get through this process faster than other countries. Turkey is followed by Thailand with 11.7%. China comes third with 9.2%," Ersoy noted.

Turkey's Tourism Minister Mehmet Nuri Ersoy Saturday said that domestic tourism is planned to restart on May 28 and international tourism will be launched in mid-June. Ersoy said traffic to Asia could be opened first amid swift recoveries in countries such as China and South Korea, also noting recoveries in European countries.

He added that international flights for a majority of countries will be launched by mid-June.

Turkey has started a detailed certification program for hotels over the coronavirus outbreak. The ministry recently issued a hygiene notice to inform hotels about COVID-19 measures, such as social distancing and hygiene rules.

After the ministry's notice, hotels started to design their facilities, including buffets, beaches, lobbies and pools, to ensure social distancing.

Around 29.34% of the participants expect their businesses to return to normal in three to six months, while 22.3% of them say this could take six to nine months. Around 14.7% think this would take up to three months, while 5.1% predict an immediate return.

In the meantime, Turkey has started to carry out telephone diplomacy with 70 countries to inform them about the country's health infrastructure under the pandemic, Ersoy said Sunday.

Turkey in a certification system detailed that a country is a safe place for tourism, regarding measures against COVID-19, said Ersoy in a written statement.

The country's Culture and Tourism Ministry launched a "healthy tourism certification" project to ensure the fulfillment of high health and hygiene standards at airlines, airports and other transportation facilities, accommodations and food venues, the ministry had said earlier.

"Turkey acts responsibly in all these processes, not only for the health of our citizens but also for its guests to ensure that they have their holidays in peace," Ersoy noted.

The country had also sent letters of intent to those 70 countries – which preferred Turkey the most as a tourist destination in recent years – including Germany, the U.K., Netherlands, Belgium, Japan, Russia and the Czech Republic.

The letters included information on passenger and employee health and safety, measures taken in facilities and in transportation, provincial and district level health institutions' lists and capacities, the minister added.

The number of foreign visitors arriving in the country totaled 4.24 million in the first quarter of the year, a 22.1% year-on-year drop amid worldwide travel restrictions due to the pandemic, according to Culture and Tourism Ministry data.

In addition, according to the IMWF survey, the national flag carrier Turkish Airlines was selected among the top five carriers that achieved great success at the point of continuing their operations.

On the question of which airline they think can achieve the greatest success in maintaining its existence and operations, IMWF Managing Partner Ersoy said Turkish Airlines with a rate of 8.05% ranked in the top five among 19 companies.

United Arab Emirates-based Emirates came in first with 13.42%, followed by Etihad with 9.05%.