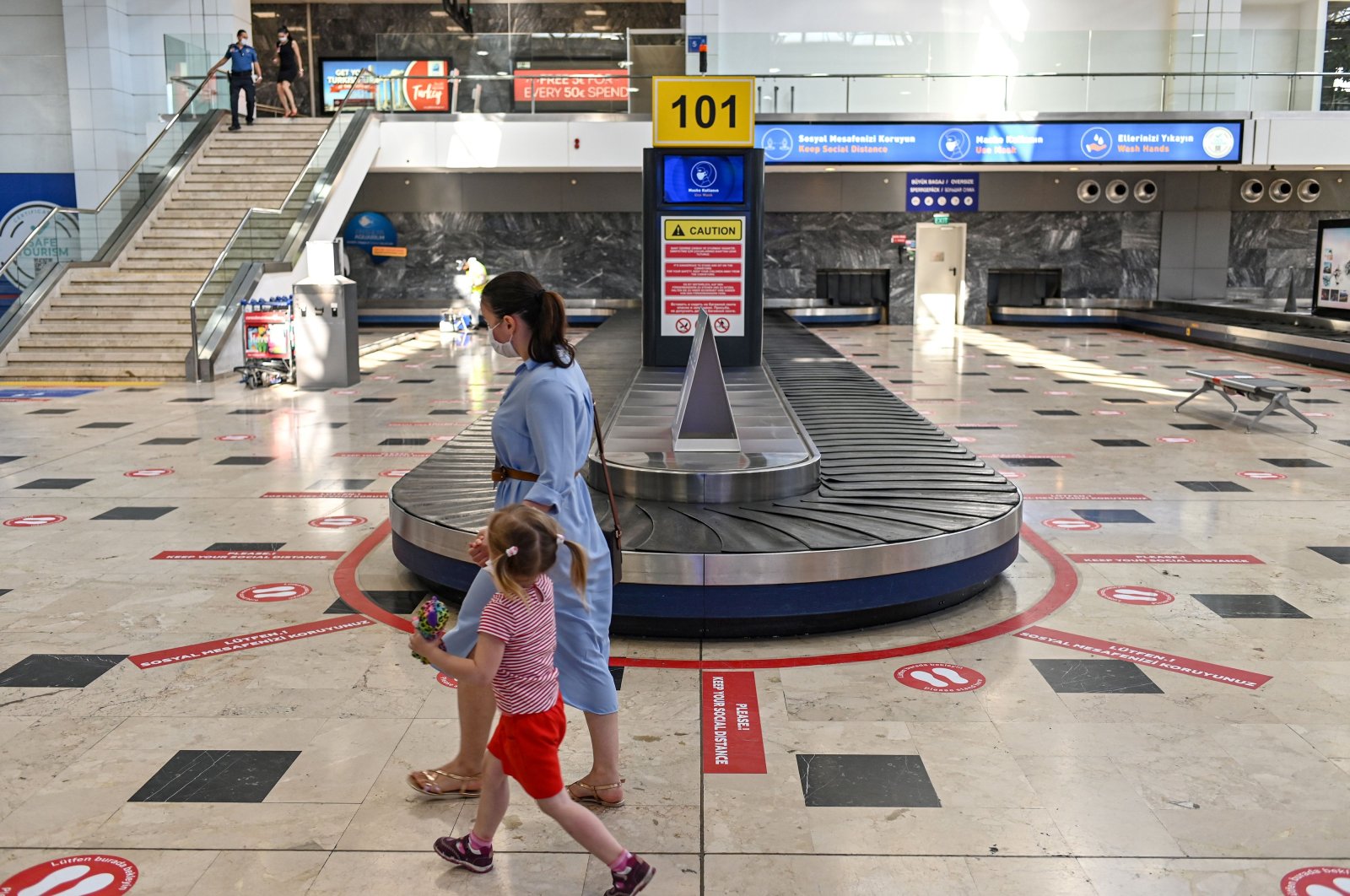 A woman walks with her daughter beside a luggage belt as stickers on the ground read "Keep your social distance" at Antalya Airport in Antalya, a popular holiday resort city in southern Turkey, June 19, 2020. (AFP Photo)
by Daily Sabah with Wires Jun 24, 2020 3:42 pm
RECOMMENDED

Turkey will open testing centers for the coronavirus in its busiest airports by July 1 and in others by July 15, the Culture and Tourism Minister Mehmet Nuri Ersoy said Wednesday.

As tourism worldwide ground to a halt due to the coronavirus pandemic, Turkey's case numbers are falling, and the country is looking to bring back tourists, issuing, among others, certificates for businesses that have taken necessary steps against the outbreak.

Foreign tourists from certain countries have begun to arrive in the country, and the numbers will increase in the upcoming weeks as more countries lift restrictions on international travel.

The country has launched a "healthy tourism certificate" program, issued under the Culture and Tourism Ministry's leadership and run in partnership with the Foreign Ministry, looking to convince countries and travelers that despite the pandemic, Turkey’s beaches and historic treasures will be safe to visit this year.

The program covers a broad range of safety measures in transport, accommodation and health conditions both for hospitality employees and tourists.

The certificate, which has been granted by international certification institutions, validates the execution of high-level health and hygiene requirements at airline companies, airports and other transport stations, as well as in accommodation outlets and food and beverage facilities.

The first COVID-19 testing centers will be opened at airports in Istanbul, the Mediterranean resort city of Antalya, the western province of Izmir and the vacation town Dalaman by July 1, while they will be established in other airports by July 15, Ersoy told Anadolu Agency’s (AA) Editor’s Desk.

The test, which will cost 15 euros (TL 115), will produce results that can be obtained within two hours, he said. Local health centers will also be informed, and tourists will be able to take tests whenever they want, the minister added.

Ersoy said they have carried out intense diplomacy work with Foreign Minister Mevlüt Çavuşoğlu during the normalization process.

Documents on health infrastructure, preparations and measures in tourism areas were sent to 100 countries from which Turkey attracts the most tourists, Ersoy said, adding that ambassadors of 60 countries and permanent foreign press members in Turkey were invited to Antalya.

"Turkey pursues its 2023 goal to attract 75 million tourists and gain $65 billion of income and it will achieve this," said Ersoy.

Due to the pandemic, the number of foreigners visiting the country plummeted 66.35% in the January-May period on an annual basis, according to the Culture and Tourism Ministry data.

Turkey received more than 4.2 million foreign visitors during the first five months of this year, the data showed. The country saw a 99.2% year-on-year decline in foreign visitor numbers, down to 29,829 last month.

Last year, more than 45 million foreigners – a historic high – entered the country, up from nearly 39.5 million in 2018.

Much depends on talks to begin flights from Russia, Germany and Britain – also hard hit by the virus – which are top markets for Turkey, where tourism accounts for up to 12% of the economy.

Britain is said to be on the verge of signing quarantine-free deals with countries such as Turkey, France, Spain, Greece and Italy, according to reports in British media.

Britons will be able to take quarantine-free holidays up to a fortnight in length with the government set to announce "air corridors" with a series of destinations, Daily Mail reported Tuesday.

It said the list would be published within days and comes amid what it said were claims that the British government was desperately looking for ways to ditch the 14-day isolation rule for U.K. arrivals.

Health Secretary Matt Hancock recently said that details of the air bridges will be published ahead of a June 29 review of the quarantine.

Turkey hopes top tourist source Russia – one of the countries hit the worst by the virus – will start flights mid-July. Second-place Germany has a coronavirus travel warning in place until the end of August but could lift it sooner.

Separately, Foreign Minister Çavuşoğlu on Wednesday discussed the normalization of the tourism industry with his Spanish counterpart.

In a phone call, Çavuşoğlu and Arancha Gonzalez Laya discussed the latest developments on the outbreak in both countries and efforts to bring back tourism, diplomatic sources said. Spain is also seeking to reassure tourists as its numbers fall and its borders reopen.

Ersoy also said that the number of public beaches available in Antalya, a tourist hotspot on the Mediterranean coast, will continue to increase.

He emphasized that they started the certification program for tourism facilities at the beginning of June.

"The certification program includes periodic inspection. We also have ‘a secret guest audit program,' like an unexpected guest. The inspector makes a reservation and stays in the hotel and writes a report after inspection," he said.

Ersoy added that more than 727 hotels and some 900 restaurants applied for the "safe tourism" certificate that will indicate they took standard measures to prevent COVID-19 infections.