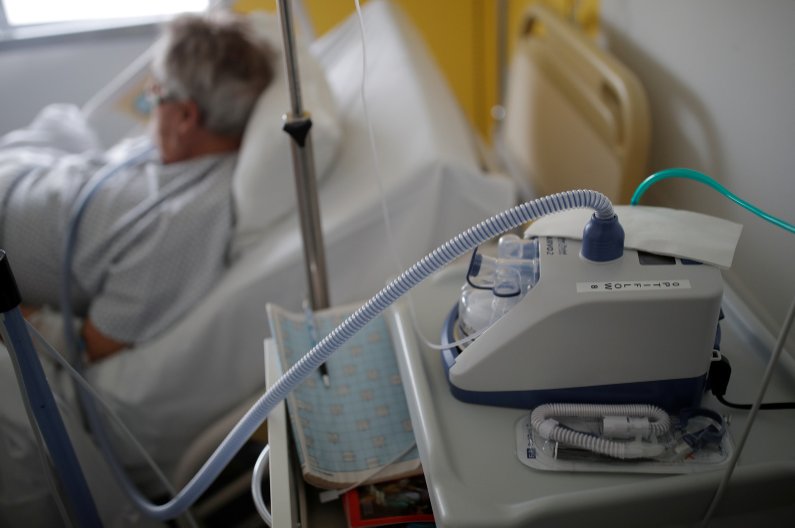 A nasal ventilator sits beside a patient being treated for COVID-19 in a pulmonology unit at a hospital in Vannes, France, March 20, 2020. (Reuters Photo)
by Daily Sabah with Agencies Mar 22, 2020 3:26 pm
Edited By Ayşe Betül Bal
RECOMMENDED

The inevitable shortage of ventilators and respirators worldwide, due to the rapidly spreading coronavirus requires creative new solutions, and the world's automotive manufacturers may have one of them. They have said they have the ability to make medical ventilators, which has become an indispensable instrument in the fight against the pandemic, if needed.

The pandemic, beyond claiming thousands of lives, is causing unpreventable damage to the global economy. Amid the financial fluctuations in world markets, with its severe effects on supply chains and exports, many global car manufacturers have already chosen to temporarily close their factories, halting production in severely hit countries, mostly in Europe.

Automotive manufacturers in hard-hit Italy, which owns a large share of global automotive production, stated that they can produce important medical devices such as the ventilator equipment used in the treatment of the respiratory problems caused by the COVID-19, the disease caused by the virus.

Car brands such as Ferrari and Fiat and Italian automotive parts manufacturer Magneti Marelli will support ventilator production efforts in Italy to combat the coronavirus during this period, media reports said.

Similar signals have also come from the U.S., where the pandemic is increasing its impact. Ford and General Motors can also reportedly switch to medical device production during this period.

Ford officials, according to an Anadolu Agency (AA) report published Sunday, stated that they are ready to do everything they can, including the manufacture of fans and other equipment, adding that they are conducting preliminary negotiations with the U.S. administration and are exploring the feasibility of production.

"Just had a long engineering discussion with Medtronic about state-of-the-art ventilators," Musk said in a statement he shared on his Twitter account Saturday.

Medtronic confirmed having a discussion with Musk but neither elaborated further on the topic of the discussion nor mentioned whether they will lead to any material actions.

Musk earlier this week offered to make ventilators for COVID-19 sufferers after the U.S. appealed for donations of respirator masks to fight their shortage.

The European Commission has decided to stockpile strategic medical supplies including protective masks and respirators due to COVID-19 cases.

In a statement, they said that member countries can use stocks of medical supplies in emergencies.