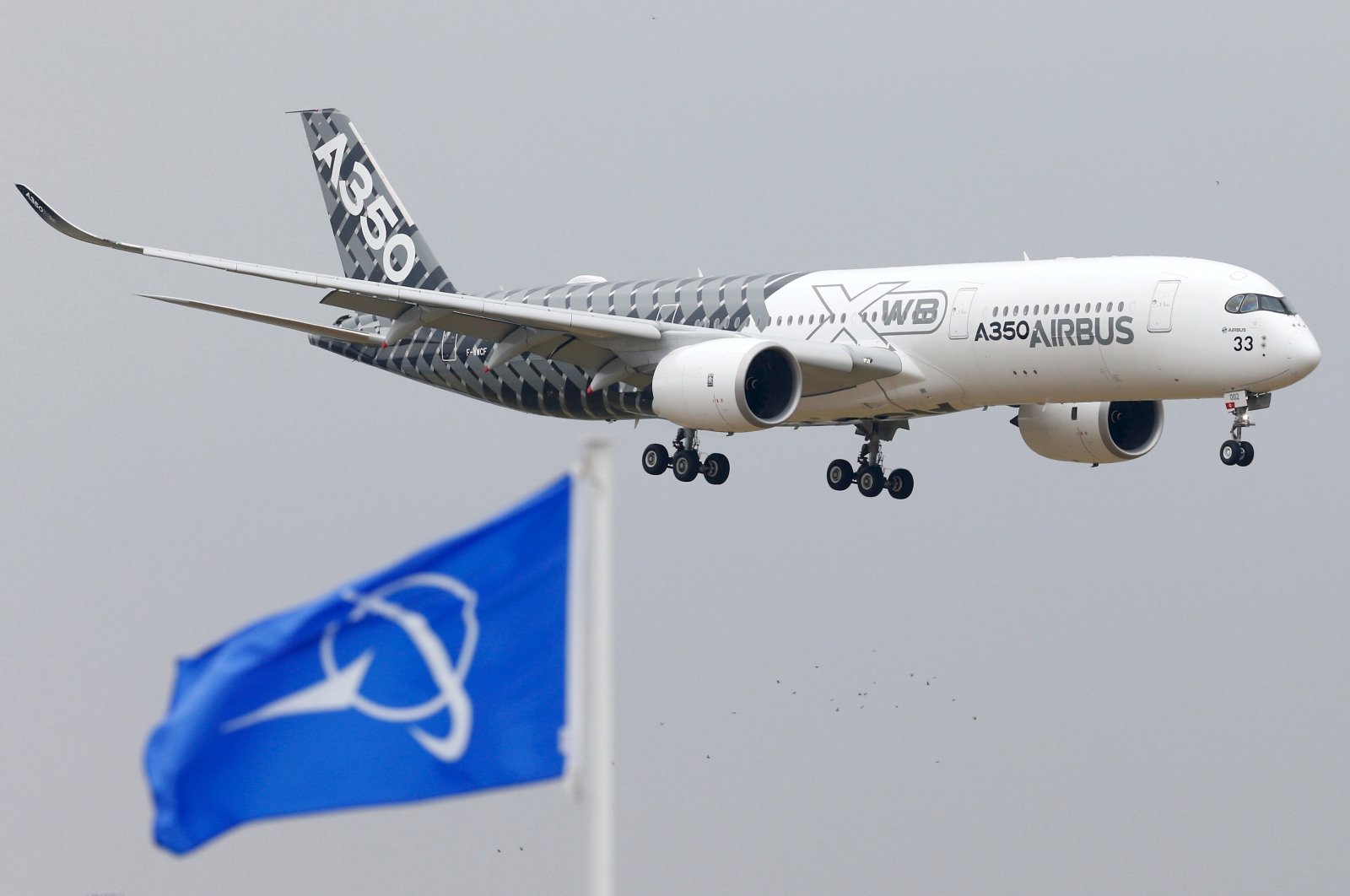 An Airbus A350 jetliner flies over Boeing flags as it lands after a flying display during the 51st Paris Air Show at Le Bourget airport near Paris, France, June 15, 2015. (Reuters Photo)
by French Press Agency - AFP Jun 20, 2021 12:13 pm
RECOMMENDED

While the United States and Europe waged a 17-year trade battle over subsidies to Boeing and Airbus, China poured money into its own commercial aircraft to take on the Western aviation duopoly.

It took a common threat for the U.S. and Europe to finally put an end to their dispute this past week, as the two sides signed a five-year truce suspending tit-for-tat tariffs.

U.S. President Joe Biden made it clear during his visit to Brussels on Tuesday: Washington and Brussels must "work together to challenge and counter China's non-market practices in this sector that give China's companies an unfair advantage."

For the past four years, state-run manufacturer Commercial Aircraft Corporation of China (COMAC) has run test flights for its 168-seat, narrow-bodied C919 airplane, a potential rival to Airbus's A320 and Boeing's B737.

COMAC expects to obtain airworthiness certification from Chinese air traffic regulators this year, coinciding with the 100th anniversary of the Chinese Communist Party.

The aircraft received between $49 billion to $72 billion in state subsidies, much more than the aid that Airbus and Boeing were given by their governments, according to Scott Kennedy, senior adviser at the Center for Strategic and International Studies in Washington.

"The very real problem is that China is manipulating the market in playing Airbus and Boeing against each other and demanding technology transfers as a condition for orders," said Richard Aboulafia, an aviation expert at Teal Group, a market analysis firm based in Virginia.

China's air traffic has recovered much faster than elsewhere in the world as the country brought the coronavirus outbreak under relative control well before others last year.

Boeing believes that the Chinese market will need 9,360 aircraft in the next 20 years, one-fifth of the world's total.

It could be a major windfall for the A320 and the 737 Max, though China has yet to authorize the return of the Boeing aircraft, which was grounded for 20 months in the U.S. following two fatal crashes.

While China remains dependent on Airbus and Boeing aircraft for now, the country's ambitions to have its own fleet are clear.

"The aeronautics industry is both an instrument of growth and a diplomatic and commercial tool that allows them to have a very comprehensive foreign policy in foreign markets," said Michel Merluzeau, an analyst at AIR, an industry consultancy.

"The Chinese have the technological and industrial skills to make an airplane, there's no doubt about that," he told the Agence France-Presse (AFP).

"The Chinese are ambitious. They're very reasonable. They know it will take time," he said. "They don't want to take on Airbus and Boeing in 2025."

The C919 was built with U.S. and European help. Only 14 of the aircraft's 82 suppliers are Chinese, according to Kennedy.

The wings and fuselage are Chinese but manufacturers in the country have yet to master the skills of building engines or airplane electronic equipment.

"They prepare their industry to meet domestic needs, it would be inferior products but at least it would be national," Aboulafia said.

The airplane is heavier than the U.S. and European aircraft, making it less fuel-efficient and thus more expensive to operate.

But COMAC is racking up customers.

The company says it has 815 orders from 28 clients, mostly from Chinese airlines – though few are confirmed orders.

China Eastern Airlines was the first company to make a firm order in March for five aircraft.

Huang Jun, professor at the school of aeronautic science and engineering of Beihang University, said the C919 will not be a game-changer.

But it may be cheaper than its rivals and create an "ABC pattern" in China, with Airbus, Boeing and COMAC operating in the country.

"We just hope we can join this market and occupy a certain market share," Huang said.

"So we will grow probably from a duopoly to a 'triopoly'" by the end of the decade for single-aisle aircraft, he said.