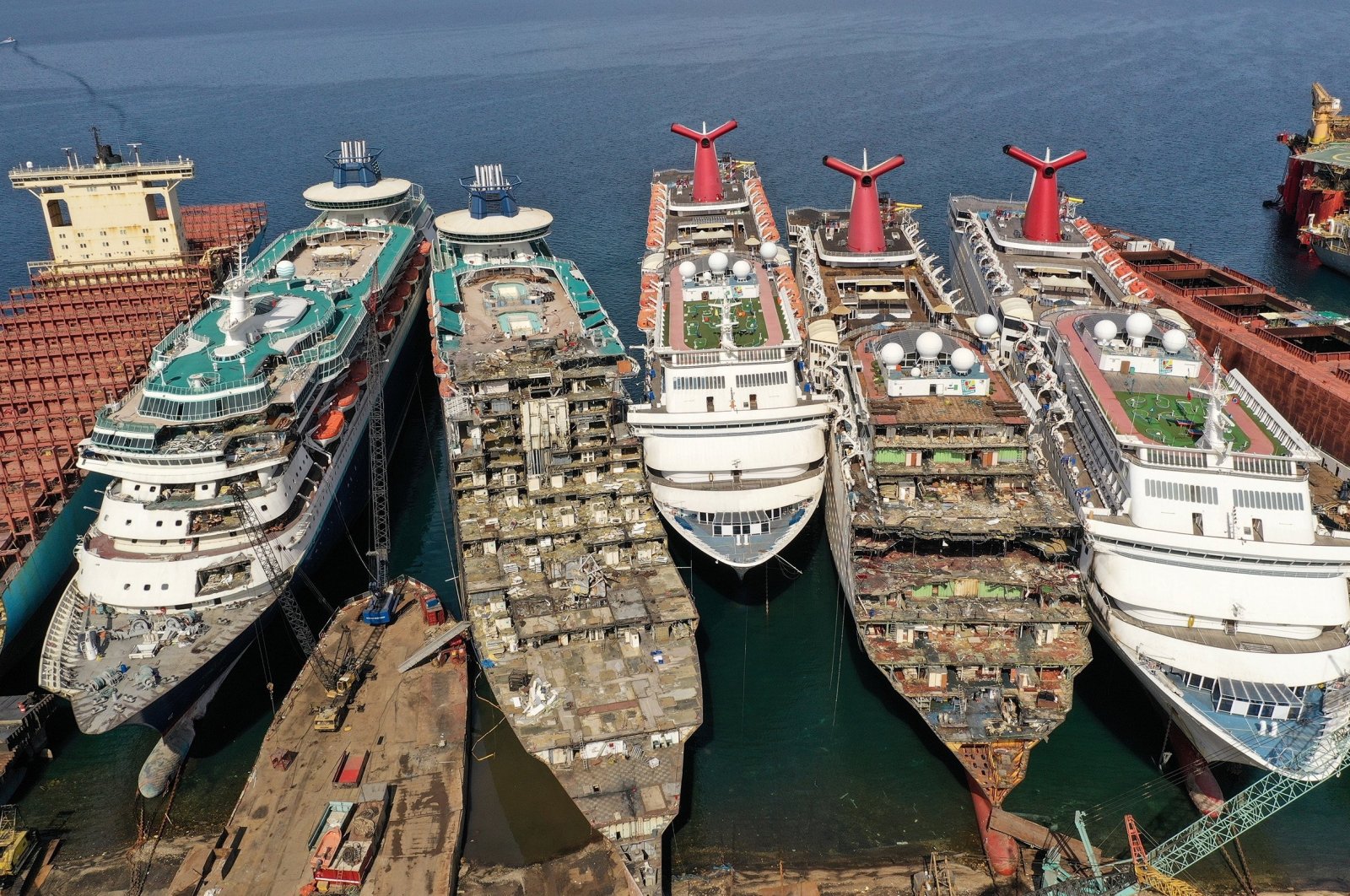 As the COVID-19 pandemic continues to destroy cruise and maritime cargo demand, behemoth vessels wait their turn for dismantling of scrap metal at a sea dock in western Turkey. The European Union has most recently added two more shipyards in the district of Aliağa in the western province of Izmir to its approved facility list for ship recycling.

With the latest approvals, the total capacity of the eight shipyards on the list has reached 500,000 tons. The average annual tonnage of EU-flagged ships that are left for scrap metal is 2 million tons.

Dismantling ships for scrap metals comes as a more cost-effective solution for companies during a time like the pandemic given that the vessels cost more than their manufacturing price idling onshore. Shipbreaking of old and nonfunctional ships, or those which cost more to keep in operation than to scrap, enables the reuse of valuable materials, and the sector is a major supplier of steel in many developing countries.

Turkey is among the top 10 steel-producing countries in the world, and some 2% of scrap iron is coming from ships broken down at Aliağa. Some 4% of the world’s global ship fleet was scrapped there between 1994 and 2002, making Turkey one of the top five recycling countries in the world. Nearly 15,000 tons of scrap steel obtained from a ship can be sold for up to $4.7 million, based on global market prices, local prices and demand.

Other facilities in the Aliağa district are also waiting for approval because European ships can only go to dismantling facilities that are included in the European Commission Approved Ship Recycling List since December 2018. Turkey, providing an important achievement in the industry, has been the only country outside the EU that entered onto the list along with a U.S. shipyard. Aliağa, which entered the list with three facilities in December 2018, increased this number to six in last January. The total number of facilities on the EU list is 41 with almost 1.5 million tons of capacity.

European shipowners, who own 35% of the world fleet, try not to use non-environmentally friendly dismantling facilities in South Asia, thus Turkish shipyards entered the game.

Aliağa played a huge role in this transformation in Europe. Many cruise ships have already come to Aliağa for dismantling. During the first nine months of this year, plants in the region reached their scrap tonnage, which they reached in the whole of last year. Since the capacity was used in such a short time, the EU has speeded up works to approve more facilities. There is a total of 22 facilities in Aliağa, the total recycling capacity of which is approximately 1 million tons.

Kamil Önal, chairperson of Aliağa Ship Recycling Industrialists Association (GEMİSANDER), said in the Dünya report that other facilities are continuing to work toward being included on the list.

Clarksons Platou Shipbroking, the brokerage company of the British logistics service provider Clarksons with more than 25 offices on five continents worldwide, also drew attention to the urgency of adding the Turkish shipyards to the list.

A report the brokerage company published in July this year emphasized that the demand for recycling in Europe has increased, but dismantling facilities are insufficient, it called for more facilities in Aliağa to be included on the EU list.

Expressing that competition in the ship-recycling sector is accelerating, Önal said that permanent investments are of great importance in this process. “The lease agreements that will expire in 2026 are the biggest obstacle to these investments. The renewal of these contracts is more crucial than ever before,” he said.