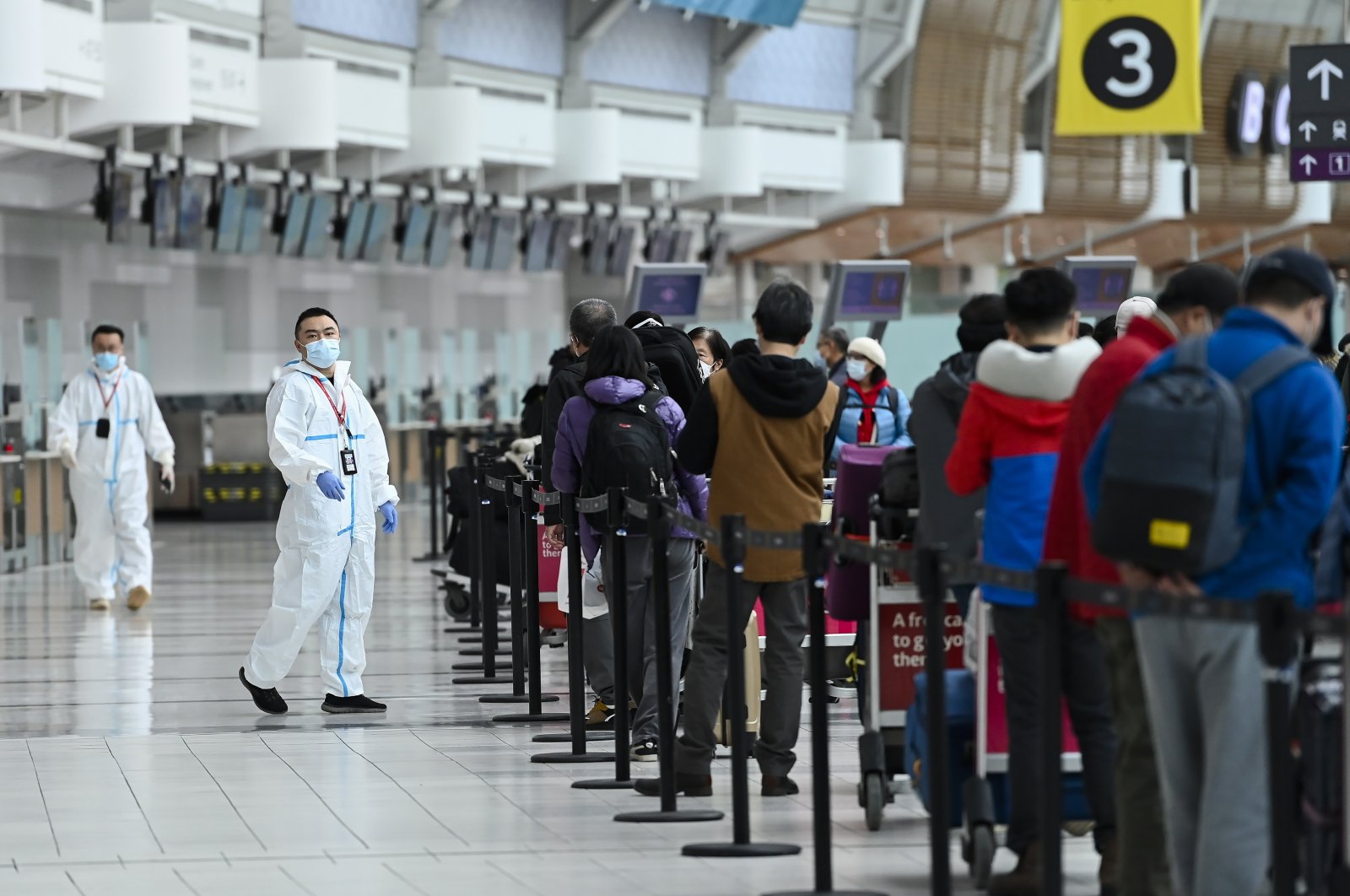 People line up and check-in for an international flight at Pearson International airport during the COVID-19 pandemic in Toronto, Canada, Oct. 14, 2020. (AP Photo)
by ASSOCIATED PRESS
Oct 18, 2020 3:57 pm

What will it take to get people flying again? International air traffic is down 92% this year as travelers worry about catching COVID-19 and government travel bans and quarantine rules make planning difficult. One thing airlines believe could help is to have rapid virus tests of all passengers before departure.

Scattered experiments on improving safety are underway around the world and a U.N. organization is leading talks to set guidelines. There is a lot at stake. With no end in sight to the pandemic, the near-total halt to international travel will hinder economies as they try to bounce back from recession and return to normal levels of business activity. Millions of jobs – at airlines, airports and travel-related businesses such as hotels and restaurants – have been affected.

One major factor keeping people from taking long-haul flights is the fear they will be seated next to someone with COVID-19, according to a survey by the International Air Transport Association (IATA). While flying helped carry the virus around the world initially, airplanes themselves have so far not been proven to be super-spreader locations the way business conferences and meat-packing plants have been.

Most people are also reluctant to fly into a quarantine that restricts their activities for up to two weeks after arrival. Quarantines themselves aren’t perfect in terms of stopping the virus from spreading, as in some cases they’re not strictly enforced.

“Testing all passengers will give people back their freedom to travel with confidence. And that will put millions of people back to work,” says Alexandre de Juniac, IATA’s director general and CEO.

Initial trials focus on testing passengers before departure, either at the airport or remotely. Information about the test result could be documented through a smartphone app. Newer tests can give results in less than an hour.

Health authorities are open to the idea but are still assessing how effective it would be.

The U.S. Centers for Disease Control (CDC) noted that testing technology, capacity and access to testing is improving. It added that “efforts are currently ongoing internationally to assess the risk reduction, determine what a feasible testing regime for air travel may look like and gain some level of agreement on standards for a harmonized approach to testing globally in air transportation.”

Who's going to decide?

The IATA is calling for rapid, accurate and scalable testing for all passengers. After airline executives appealed for help on this from the European Union and the White House’s COVID-19 task force, the issue appears to have moved to a United Nations forum, the International Civil Aviation Organization based in Montreal.

The ICAO is working on guidelines based on scientific advice that countries could use in establishing testing regimes. The issue is on the agenda for an Oct. 29 meeting, but that’s not a guarantee that guidelines will be approved.

Various forms of testing have been tried for weeks in different places. What airlines want is a larger-scale international approach.

For instance, China requires a time-consuming negative polymerase chain reaction test before departure. At Frankfurt's international airport, diagnostics firm Centogene has been offering tests to non-symptomatic people for 59 euros ($69) for a result within 12 hours and 139 euros for six hours. A doctor’s certificate – for another 25 euros – can help avoid quarantine restrictions.

The Switzerland-based Commons Project Foundation and the World Economic Forum are holding trials this month for CommonPass, a digital health pass that lets travelers securely document compliance with COVID-19 test requirements through a QR code on their smartphones or on paper. The idea is to get around the problems posed by printed test results, which may be from unfamiliar labs or in a language that those inspecting them don’t know.

Cathay Pacific has trialed CommonPass with volunteers on a Hong Kong-Singapore flight, and United Airlines will test it between London Heathrow and Newark Liberty International. CDC’s Martin S. Cetron, head of the global migration and quarantine division, says it is “eager to learn” from the trials and that CommonPass “could be one of the many potential tools.” CommonPass could be adopted by individual countries, without waiting for international agreements.

There are a lot of moving parts to any testing regime. First off, the test must be accurate, fast and cheap enough to deploy on a large scale. Governments must agree to accept the results; while governments are represented in the ICAO, the organization’s guidelines will not be mandatory. There has to be a way of certifying the result, while at the same time protecting the privacy of passenger medical information, and a procedure for handling people who test positive.

Scientists warn there are concerns about the accuracy of some rapid tests. People can test negative for a couple of days after being infected. People can be infectious before they show symptoms, and these people may also test negative.

The International Air Transport Association advocates a layered approach. In addition to testing, that means: social distancing at the airport, touchless check-in, wearing masks in flight and limiting passenger movement in the cabin.

In a survey published in May, consulting firm McKinsey asked 40 corporate travel planners what would give them the confidence to book travel. Seventy-five percent said they would want a vaccine, while 39% said testing. McKinsey said business travel spending exceeded $1.4 trillion in 2018 or 21% of the global travel and hospitality sector. Business travelers drive 55% to 75% of the profit at top airlines – even though they make up less than 10% of passengers.