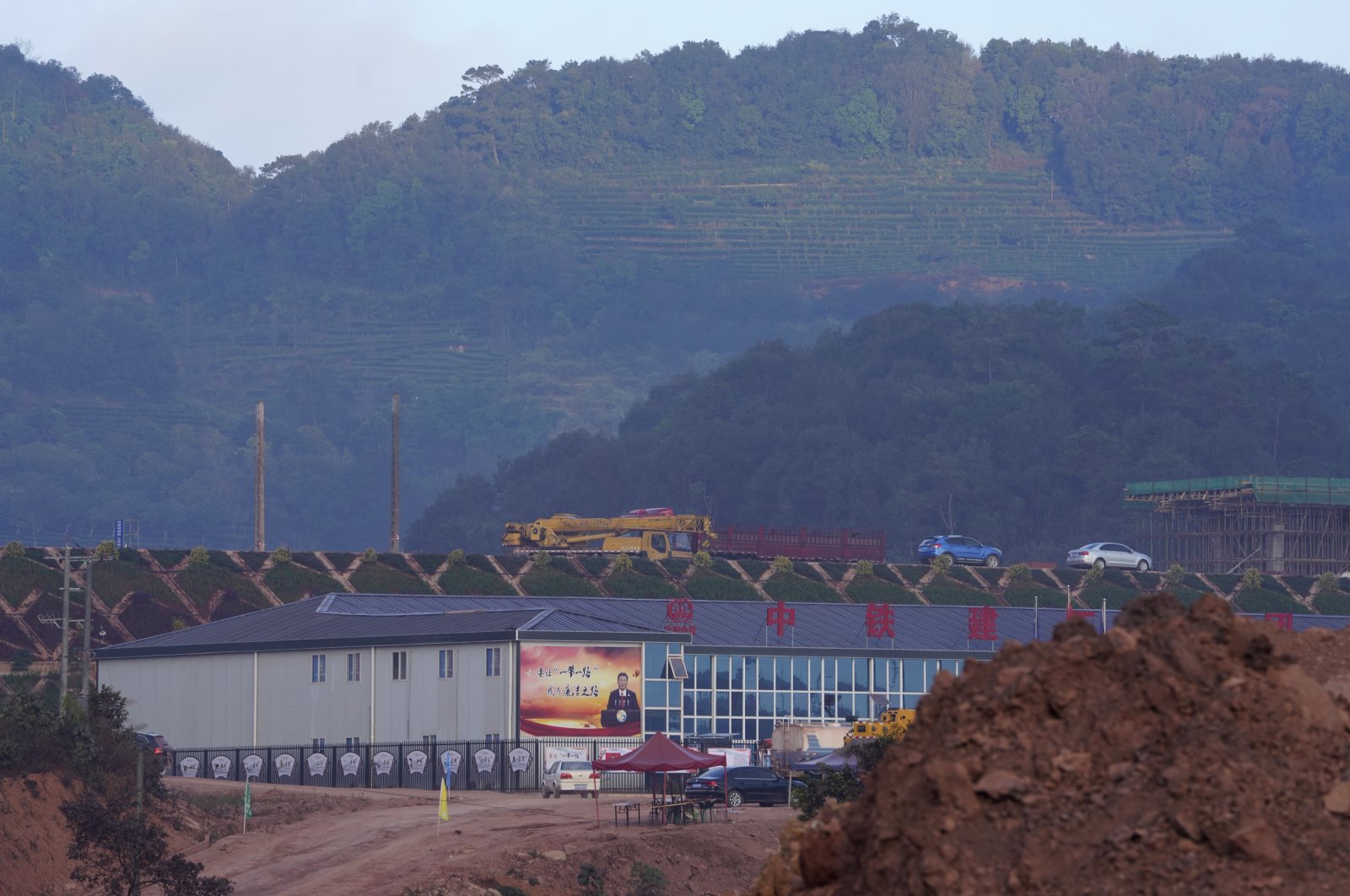 A propaganda board depicting Chinese President Xi Jinping is seen at the construction site of the Pu'er high speed rail station that is part of the China-Laos railway in Pu'er in Yunnan province, southwestern China, Dec. 2, 2020. (AP Photo)
by Associated Press Dec 02, 2021 10:54 am
RECOMMENDED

Laos, a nation of 7 million people wedged between China, Vietnam and Thailand, is opening a $5.9 billion Chinese-built railway that links China's poor southwest to foreign markets but piles on potentially risky debt.

The line through lush tropical mountains from the Laotian capital, Vientiane, to Kunming is one of hundreds of projects under Beijing's Belt and Road Initiative (BRI) to expand trade by building ports, railways and other facilities across Asia, Africa and the Pacific.

The 1,035-kilometer (642-mile) line opens this week to cargo but no regular passengers due to anti-pandemic travel curbs.

Poor countries welcome China’s initiative. But the projects are financed by loans from Chinese state-owned banks that must be repaid. Some borrowers complain Chinese-built projects are too expensive and leave too much debt.

The Kunming-Vientiane railway is a link in a possible future network to connect China with Thailand, Vietnam, Myanmar, Malaysia and Singapore. That would give southern China more access to ports and export markets.

Laotian leaders hope the railway will energize their isolated economy by linking it to China and markets as far away as Europe. But foreign experts say the potential benefits to Laos beyond serving as a channel for Chinese trade are unclear and the cost appears dangerously high.

The railway will “generate very positive economic returns” for China and possibly other countries, but it is harder to see “exactly what the economic benefits are going to be” for Laos, said Scott Morris of the Center for Global Development in Washington.

With only 21 stations in Laos, the line is designed to serve Chinese needs to reach foreign ports quickly, Morris said. He said a railway to serve mostly rural Laos would have more stations to connect farmers to markets.

“This is essentially a Chinese public infrastructure project that happens to exist in another country," he said.

Chinese contractors are building a high-speed rail line from the Thai capital, Bangkok, to northeastern town of Nong Khai on the Lao border. That won't be completed until 2028 and leaves a gap to be filled between the border and the line to China.

The Kunming-Vientiane railway's 418-kilometer (260-mile) segment in Laos will be operated by the Laos-China Railway Co., a joint venture between China Railway group and two other Chinese government-owned companies with a 70% stake and a Laotian state company with 30%.

Borrowed money makes up 60% of the railway’s investment, according to the two governments.

Such a debt load is unusually heavy and “repayment risk should be quite high,” said Laura Li of S&P Global Ratings, a specialist in infrastructure financing.

Laos might be forced to take over repaying the joint venture's full $3.5 billion debt to keep the line running if the company defaults and the Chinese partners choose not to put in more money, said Ammar A. Malik and Bradley Parks in a report for AidData, a research project at Virginia’s College of William & Mary.

That is the equivalent of nearly a fifth of Laos’s economic output last year.

The country's outstanding debt, much of it owed to Beijing, is equal to about two-thirds of annual economic output. Laos ranks among poor countries deemed to be at "high debt risk.”

Railways can raise incomes by linking rural areas with cities and export markets. But that payoff can take decades, while railways require big spending on equipment, land and construction. Operators that start with high debt need revenue fast to pay lenders.

“Laos has put itself in a position where if the railway doesn’t make a profit, then it’s got real debt issues,” said Greg Raymond, a Southeast Asian expert at Australian National University.

Laos has been one of the world’s fastest-growing economies over the past decade but still is one of its poorest. Its average economic output person more than doubled since 2010 but stands at $2,600.

The railway has the potential to raise incomes by 21% in the long run if other reforms also are carried out to make trade and doing business easier, the World Bank said in a report last year.

The railway “will convert Laos from being geographically disadvantaged, by taking advantage of its location, to a regional land-linked hub,” said the vice president of the Lao National Chamber of Commerce and Industry, Valy Vetsaphong, according to the Lao news agency.

People who were displaced from their homes to make way for the railway complain they were paid too little.

Environmentalists say construction damaged natural habitats and threatens endangered species in Laos, which already is a center for wildlife trafficking.

"Any new transport facilitator between the country and major markets for wildlife, such as China, is going to threaten wildlife," said Steven Galster, executive director of the Freeland Foundation, which investigates and combats wildlife trafficking.

Laos represents a new market for China’s railway technology. China’s state press describes the Kunming-Vientiane line as high-speed, but its 160 kph (100 mph) speed is about half that of China’s bullet trains.

China's bullet train network is the world's biggest. The system is based on technology licensed from French, German and Japanese manufacturers, but China is developing its own trains and marketing them globally.

Railways built with BRI financing, including in Kenya and Ethiopia, have struggled to repay Chinese loans. Beijing has started offering lower-cost loans and forgiving some following complaints about debt loads for poor countries.

In 2019, Beijing forgave debts owed by Ethiopia and Cameroon. The same year, Malaysia canceled a $20 billion rail line due to be built by Chinese contractors after failing to renegotiate the price.

Laos also is turning to its giant neighbor to help develop other industries, including delivering power from hydroelectric dams to neighboring countries, one of the country's biggest exports.

Under an agreement signed in March, the national power distribution grid and export system will be run by a joint venture between the Laos utility and state-owned China Southern Power Grid Ltd.