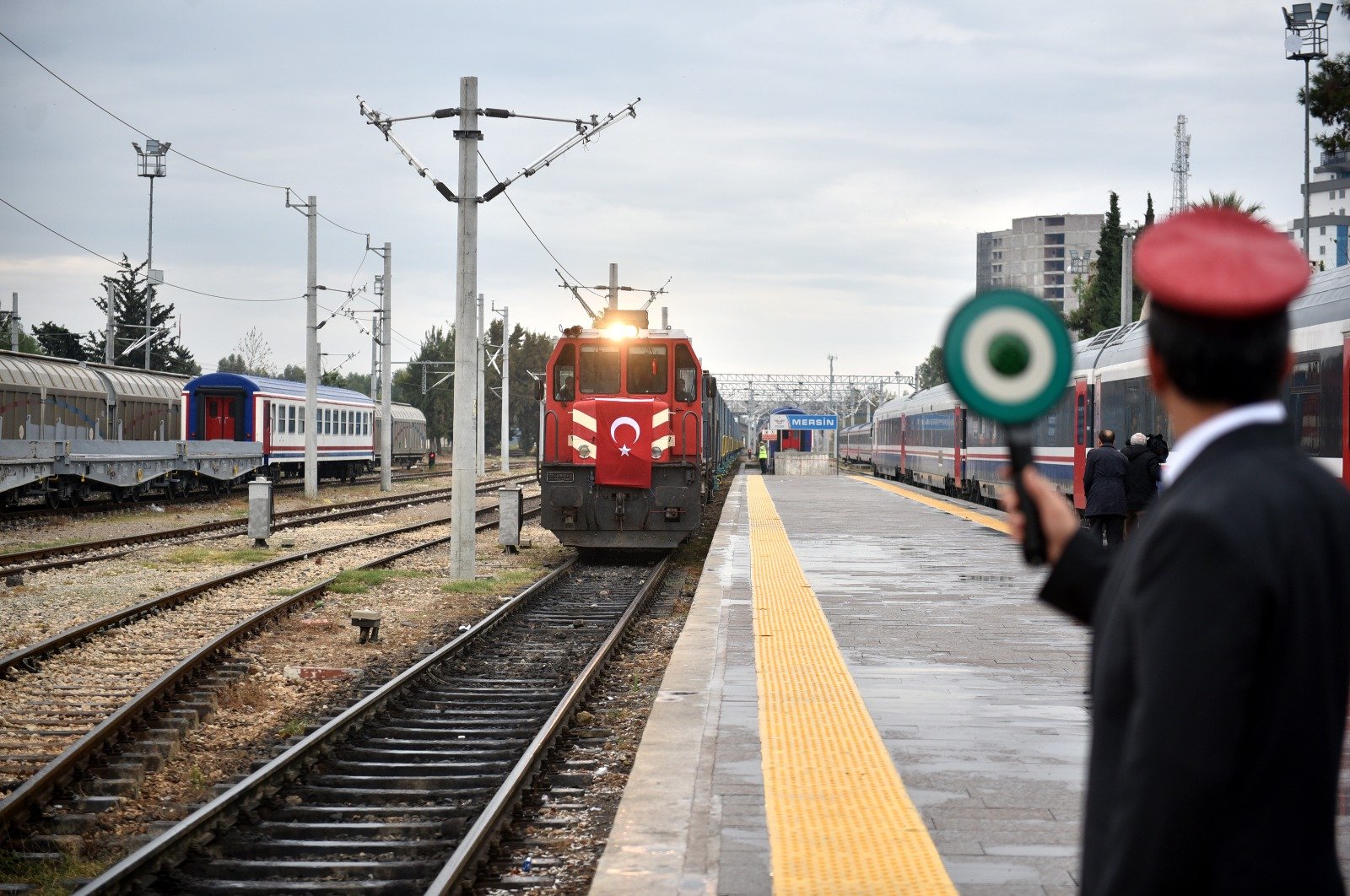 Train carrying export goods from Kazakhstan and Azerbaijan via BTK to Turkey’s Denizli and Mersin will be the first one to use the new system. (AA File Photo)
by DAILY SABAH May 13, 2020 12:35 pm
Edited By Ayşe Betül Bal
RECOMMENDED

Railway transportation, which offers a contactless transport opportunity, has gained new traction as the coronavirus pandemic forces countries to find alternative, safer ways of carrying out exports and foreign trade.

Accordingly, the capacity of the Baku-Tbilisi-Kars (BTK) railway, connecting Europe to Asia, has been increased to meet the growing demand, Turkish Transport and Infrastructure Minister Adil Karaismailoğlu said.

Karaismailoğlu told Anadolu Agency (AA) on Wednesday that they have established a railroad container transfer system at the Canbaz Station along the Turkish-Georgian border which will provide an additional 3,500 tons in capacity.

From the very beginning of the emergence of coronavirus cases in Turkey, Ankara has moved to contain the spread of the virus and announced several measures, including immediately closing its borders with virus-hit Iran. Trade through the Iraqi-Turkish border via trucks was also halted for a limited time. However, it was later resumed via a buffer zone established for truck drivers to send goods without entering each country.

During this process of country’s efforts to contain the virus which has proven effective and the measures are now being gradually eased, BTK railway came to the fore, especially for trade with Central Asian countries where Turkish trucks could no longer travel due to the closed Iranian border.

Karaismailoğlu said there is a great increase in demand for the BTK railway, connecting Turkey, Azerbaijan and Georgia, and to establish a freight and passenger link between Europe and China, especially in the foreign trade with Central Asia. That’s why they stepped in to increase the capacity.

The minister said the track width on the lines are different from the ones in countries like Georgia, Azerbaijan or Russia and from those in Turkey and Europe thus a wagon transfer system is needed or the wheelsets of the trains need to be changed.

With the system established on the Georgian border, the transfer of the wagons became faster, he noted, adding that this allows an additional 3,500 tons of freight to be moved daily.

The minister announced that the first train to use this transfer system is now on the way, carrying mining, agricultural goods and ferrosilicon raw material from Kazakhstan and Azerbaijan to western Turkey’s Denizli and southern Mersin.

Emphasizing that the BTK railway is an important bridge between Europe and Asia, Karaismailoğlu said the amount of cargo carried on the railway line is increasing gradually.

The railway, has a significant role in trade with countries like Azerbaijan, Georgia, Kazakhstan, Turkmenistan, Uzbekistan and Kyrgyzstan along with Russian and China.

Providing the shortest rail link between Europe and Asia, BTK plays an important role in the implementation of China’s Belt and Road Initiative (BRI) and the North-South Transport Corridor.

Starting off from Baku, the capital of Azerbaijan, the trains stop in the Georgian capital Tbilisi, pass through gauge-changing facilities in the Georgian town of Akhalkalaki and end their journey in the eastern Turkish town of Kars.