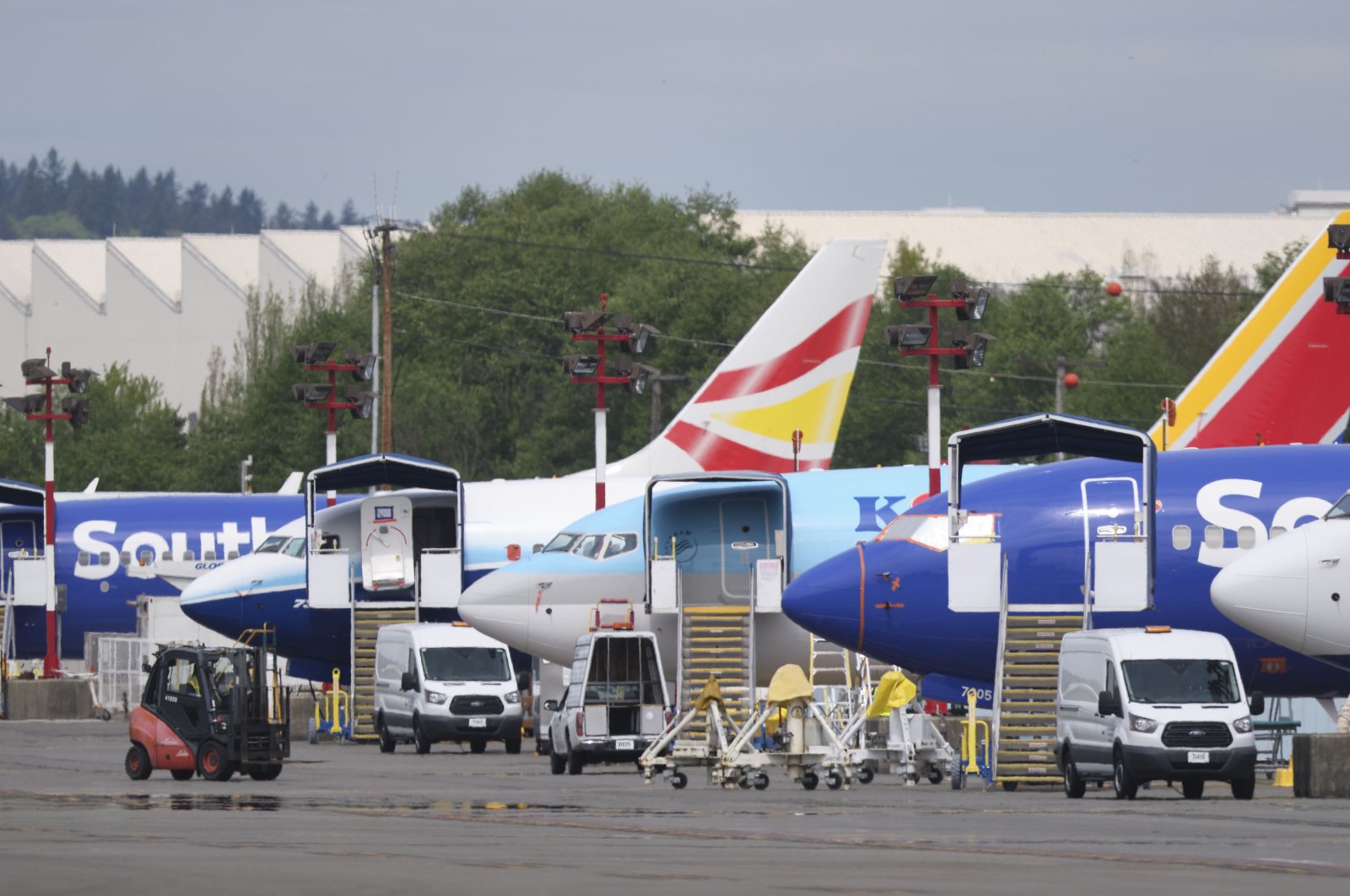 Grounded Boeing 737 MAX airplanes outside the company's factory, Renton, Washington, April 29, 2020. Boeing last week announced that it would lay off 15% of its commercial-airplanes division workforce amid the fallout from the coronavirus pandemic. (AFP Photo)
by REUTERS May 03, 2020 2:59 pm
RECOMMENDED

The ongoing U.S. travel crisis is causing thousands of job cuts as the aviation sector waits for passengers to return to the skies but braces for years of lower demand because of the coronavirus pandemic.

U.S. airlines are slashing hundreds of thousands of flights, cutting schedules by 80% or more through at least June and parking thousands of jets as demand for tickets has plunged by about 95%. Airlines are requiring facial coverings and implementing new cleaning procedures to try to convince passengers it is safe to fly again, but also fear the weakened economy may further drag down demand.

Late Friday, Spirit AeroSystems said that in response to lower production rates from Boeing Co and Airbus SE it would layoff 1,450 workers in Kansas.

“This sudden drop in air travel has forced our customers to adjust to lower demand from airlines, many of which are seeking to defer or cancel airplane orders,” Spirit AeroSystems Chief Executive Tom Gentile told employees in an email seen by Reuters. “All indications right now tell us this lower demand for new commercial airplanes is likely to last for several years.”

On Wednesday, Boeing Co. announced it would cut some production rates and eliminate about 16,000 jobs worldwide, or 10% of its workforce by year-end.

Boeing Chief Executive Dave Calhoun said he expects it will “take two to three years for travel to return to 2019 levels and it will be a few years beyond that for the industry to return to long-term growth trends.” The cuts in some areas, such as commercial airplanes, will be more than 15%, Boeing said.

Delta Air Lines Inc said last week it does not expect air travel to recover for two or three years. More than 37,000 Delta employees have volunteered to take unpaid leave lasting from one month to a year.

American Airlines Chief Executive Doug Parker told Reuters in an interview on Thursday that the airline will be “smaller than we intended to be certainly into 2021.”

Labor union SEIU said Thursday at least 13,000 union members at airports have been laid off and another 1,000 layoffs are planned. The U.S. Treasury has not yet awarded $3 billion in payroll assistance cash grants approved by Congress for airport contractors such as baggage handlers and airplane caterers.

U.S. airlines last month collectively were awarded $25 billion in Treasury cash grants but as a condition must not fire workers or reduce through Sept. 30.

Numerous airlines have warned that without a dramatic turnaround in passenger numbers they will be forced to make new significant cuts before year-end.

JPMorgan Chase said in a research note on Friday that “October 1st is likely to emerge as one of the darkest days in history for airline labor” – though it noted that Congress could opt to extend additional assistance.

United Airlines is reducing working hours by 25% for 15,000 employees starting May 24, drawing criticism from an employee union and some U.S. lawmakers who contend that the move violates the terms of the $5 billion payroll assistance United is receiving from the Treasury.

“The taxpayers of this country have offered a generous bailout to your company and you should, in turn, honor this trust by keeping the promises you made to those you employ,” Republican Senator Josh Hawley wrote United on Friday.

United declined to comment on Hawley’s letter on Saturday but its chief operations officer Greg Hart told employees in an email on Friday that the reduction in hours does not violate the terms of government assistance.

He said United is “making similar changes for our management personnel” and that those changes will be announced on Monday.

Last month, General Electric Co. said it was furloughing 50% of workers in U.S. engine assembly and component manufacturing operations, a move that impacted thousands of employees. That followed the 2,600 U.S. job cuts announced in March by GE’s aviation unit, which makes engines for Boeing and Airbus.