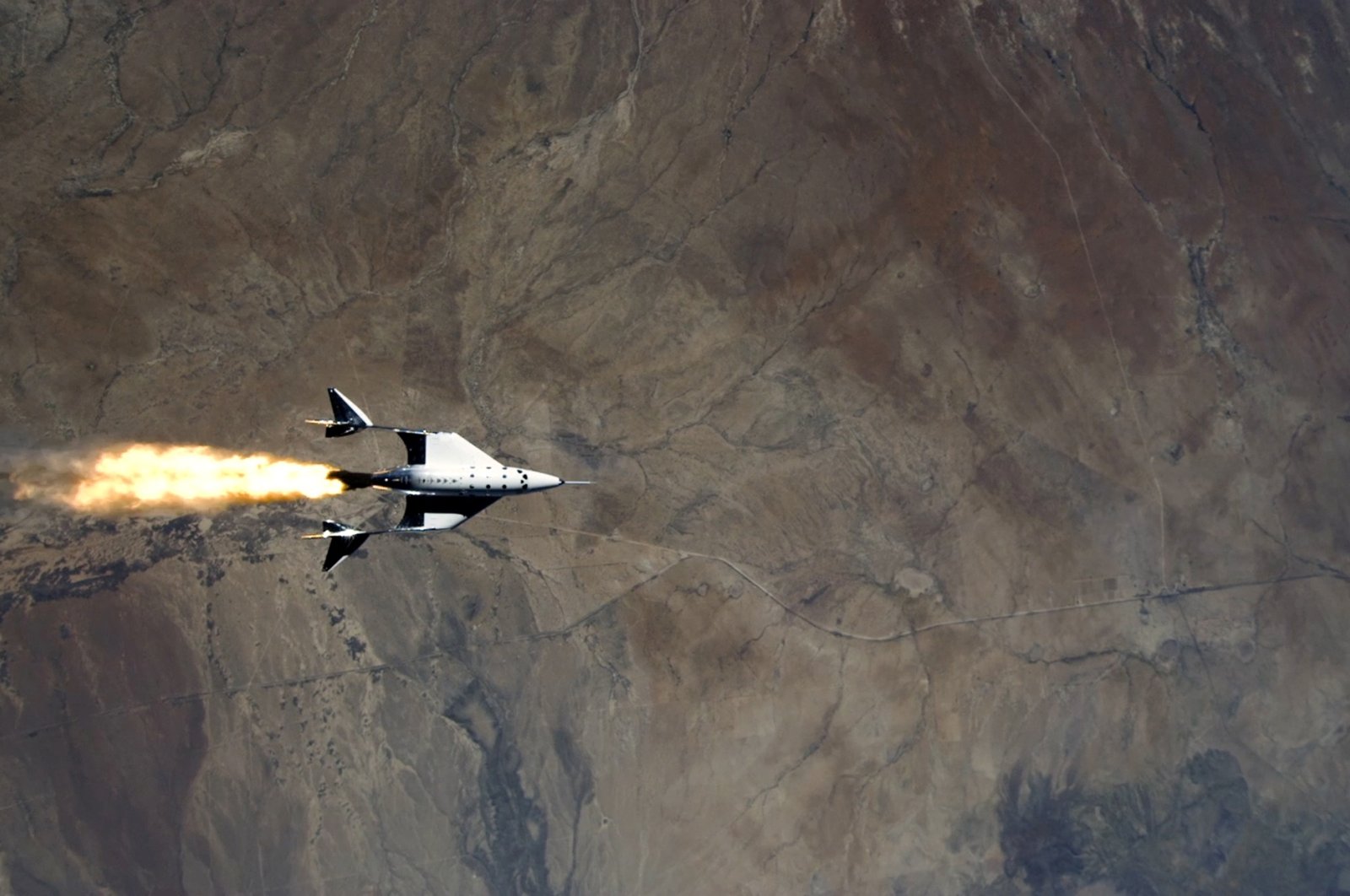 This still image from a video shows Virgin Galactic's VSS Unity starting its engines after release from its mothership as it commences its first spaceflight after launch from Spaceport America, New Mexico, U.S., May 22, 2021. (Reuters Photo)
by Agencies May 23, 2021 12:47 pm
RECOMMENDED

British billionaire Sir Richard Branson's private spaceship company Virgin Galactic on Saturday made its first rocket-powered flight from New Mexico to the fringe of space in a manned shuttle, as the company forges toward offering tourist flights to the edge of the Earth’s atmosphere.

This is a milestone in Branson's near two-decade effort to create a commercial "spaceline" to take paying customers into outer space.

High above the desert in a cloudless sky, the VSS Unity ignited its rocket to hurtle the ship and two pilots toward space. A live feed by NASASpaceFlight.com showed the ship accelerating upward and confirmed a landing later via radar.

Virgin Galactic announced that its VSS Unity shuttle accelerated to three times the speed of sound and reached an altitude of just over 55 miles (89 kilometers) above sea level before making its gliding return through the atmosphere.

Touted as the first human spaceflight from the state, the craft lifted off in the desert about 45 miles northeast of Las Cruces, New Mexico, at about 10:35 a.m.

“Today was just an incredible step in the right direction,” Branson told the Associated Press (AP) shortly after the flight landings. “It tested a lot of new systems that the teams have been building and they all worked.”

Virgin Galactic CEO Michael Colglazier said at least two more undated test flights lie ahead – the next with four mission specialist passengers in the cabin. Pending trials also include a flight that will take Branson to the edge of space.

“The flight today was elegant, beautiful,” Colglazier said. “We’re going to analyze all the data that we gather on these flights. But watching from the ground and speaking with our pilots, it was magnificent. So now it’s time for us to do this again.”

Virgin Galactic said the flight provided an assessment of upgrades to a horizontal stabilizer, other flight controls and a suite of cabin cameras designed to provide live images of the flight to people on the ground. The shuttle also carried a scientific payload in cooperation with NASA’s Flight Opportunities Program.

Preparations for the latest flight included a maintenance review of the special carrier plane that flies the six-passenger spacecraft to a high altitude, where it is released so it can fire its rocket motor and make the final push to space.

The first powered test of the rocket ship in New Mexico from Spaceport America was delayed repeatedly before Saturday’s launch. In December 2020, computer trouble caused by electromagnetic interference prevented the spaceship’s rocket from firing properly. Instead of soaring toward space, the ship and its two pilots were forced to make an immediate landing.

While Virgin Galactic’s stock price ticked up this week with the announcement of the latest test being scheduled for Saturday, it wasn’t enough to overcome the losses seen since a peak in February. Some analysts have cautioned that it could be a while before the company sees profits as the exact start of commercial operations is still up in the air.

Virgin Galactic is one of a few companies looking to cash in on customers with an interest in space.

Elon Musk’s SpaceX will launch a billionaire and his sweepstakes winners in September. That is expected to be followed in January 2022 by a flight by three businesspeople to the International Space Station.

Jeff Bezos’ Blue Origin launched a new capsule in January as part of testing as it aims to get its program for tourists, scientists and professional astronauts off the ground. It’s planning for liftoff of its first crewed flight on July 20, the date of the Apollo 11 moon landing.

Virgin Galactic has reached space twice before. The first time was from California in December 2018.

The flights are designed to reach an altitude of at least 50 miles (80 kilometers) as the rocket motor is turned off and the crew prepares to reenter the atmosphere and glide to a landing.

As part of the return trip, a feathering system slows and stabilizes the craft as it reenters the atmosphere.

New Mexico taxpayers have invested over $200 million in the Spaceport America hangar and launch facility, near Truth or Consequences, after Branson and then-Gov. Bill Richardson, a Democrat, pitched the plan for the facility, with Virgin Galactic as the anchor tenant.

Richardson watched Saturday’s flight from the ground below and later thanked the residents of local counties who committed early on to a sales tax increase to support the venture.

“It’s finally a great day after all of us taking a lot of heat – mainly me – over a period of time,” Richardson said. “But it’s happened. It’s successful.”