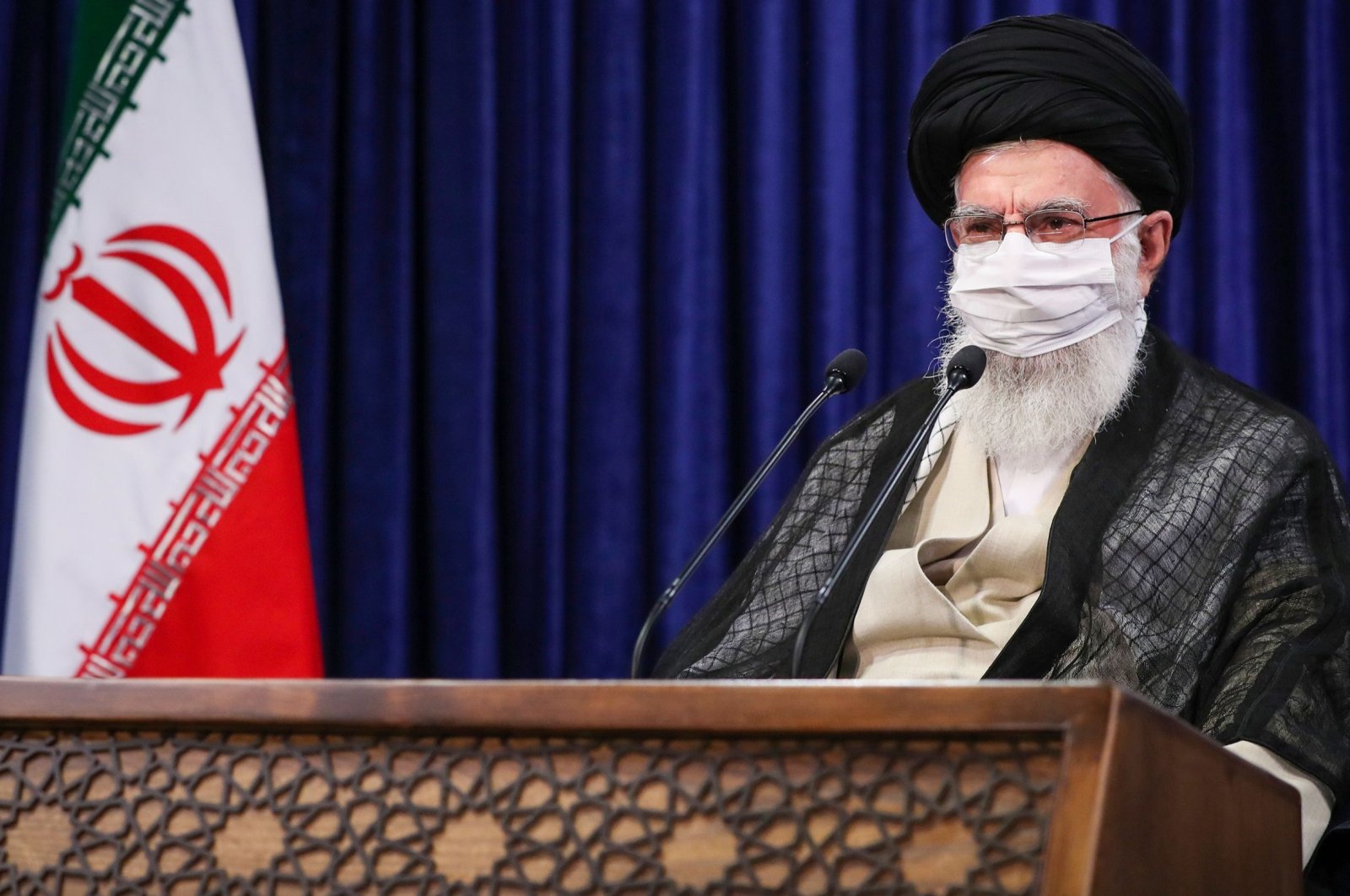 A handout photo provided by the office of Iran's Supreme Leader Ali Khamenei shows him wearing a protective mask amid the COVID-19 pandemic as he attends a virtual Cabinet meeting in Tehran, Iran, Aug. 23, 2020. (AFP Photo)
by Agencies Sep 21, 2020 4:11 pm
RECOMMENDED

The United States said Monday it was imposing sanctions on Iran's defense ministry and Venezuelan President Nicolas Maduro under a United Nations authority that is widely contested.

"For nearly two years, corrupt officials in Tehran have worked with the illegitimate regime in Venezuela to flout the U.N. arms embargo," Secretary of State Mike Pompeo told reporters.

"Our actions today are a warning that should be heard worldwide," he said.

Pompeo said that President Donald Trump has issued an executive order "that is a new and powerful tool to enforce the U.N. arms embargo."

The latest sanctions include a new executive order signed by Trump targeting those who buy or sell Iran conventional arms that was previously reported by Reuters.

Acting under that order, the U.S. said it had imposed penalties on Iran's Ministry of Defense and Armed Forces Logistics, Iran's Defense Industries Organization and its director, Mehrdad Akhlaghi-Ketabchi.

The impetus behind the U.S. action is the impending expiry of a U.N. arms embargo on Iran and a desire to warn foreign actors – U.S. entities are already barred from such trade – that if they buy or sell arms to Iran they will face U.S. sanctions.

Under the 2015 nuclear deal that Iran struck with six major powers – Britain, China, France, Germany, Russia and the U.S. – the U.N. conventional arms embargo is set to expire on Oct. 18, shortly before the Nov. 3 U.S. election.

"No matter who you are, if you violate the U.N. arms embargo on Iran, you risk sanctions," Pompeo told a news conference with Treasury Secretary Steven Mnuchin, Defense Secretary Mark Esper, Secretary of Commerce Wilbur Ross and Robert O'Brien, the national security adviser.

The U.S. says it has triggered a "snap back," or resumption, of virtually all U.N. sanctions on Iran, including the arms embargo, to come into effect at 8 p.m. on Saturday (0000 GMT Sunday).

Other parties to the nuclear deal and most U.N. Security Council members have said they do not believe the U.S. has the right to reimpose the U.N. sanctions and that the U.S. move has no legal effect.

Despite this opposition, Pompeo said the U.S. was not isolated.

"The country that's isolated today is not the United States but rather Iran," he said.

The Trump administration has previously imposed sanctions on Maduro, Venezuela’s socialist leader, a rare action against a foreign head of state, accusing him of undermining democracy in the South American country.

Speaking on the condition of anonymity, a senior U.S. official said Monday that Iran could have enough parts for a nuclear weapon over the next few months and that Tehran has resumed long-range missile cooperation with nuclear-armed North Korea. He did not provide detailed evidence regarding either assertion.

The new sanctions fit into U.S. Trump's effort to limit Iran's regional influence and come a week after the U.S. brokered deals for the United Arab Emirates (UAE) and Bahrain to normalize ties with Israel, pacts that may coalesce a wider coalition against Iran while appealing to pro-Israel American voters ahead of the Nov. 3 election.

The new sanctions also put European allies, China and Russia on notice that while their inclination may be to ignore the U.S. drive to maintain the U.N. sanctions on Iran, companies based in their nations would feel the bite for violating them.

The Trump administration suspects Iran of seeking nuclear weapons, something Tehran denies, and Monday's punitive steps are the latest in a series seeking to stymie Iran's atomic program, which U.S. ally Israel views as an existential threat.

"Iran is clearly doing everything it can to keep in existence a virtual turnkey capability to get back into the weaponization business at a moment's notice should it choose to do so," the U.S. official told Reuters.

The official argued Iran wants nuclear weapons capabilities and the means to deliver it despite the 2015 deal that sought to prevent this by restraining Iran's atomic program in return for access to the world market.

In May 2018, Trump abandoned that agreement to the dismay of the other parties – Britain, China, France, Germany and Russia – and restored U.S. sanctions that have crippled Iran's economy.

Iran, in turn, has gradually breached the central limits in that deal, according to the International Atomic Energy Agency (IAEA), including the size of its stockpile of low-enriched uranium as well as the level of purity to which it was allowed to enrich uranium.

"Because of Iran's provocative nuclear escalation, it could have sufficient fissile material for a nuclear weapon by the end of this year," the official said without elaborating except to say this was based on "the totality" of information available to the U.S., including from the IAEA.

The Vienna-based agency has said Iran only began significantly breaching the 2015 deal's limits after the U.S. withdrawal and it is still enriching uranium only up to 4.5%, well below the 20% it had achieved before that agreement, let alone the roughly 90% purity that is considered weapons-grade, suitable for an atomic bomb.

"Iran and North Korea have resumed cooperation on a long-range missile project, including the transfer of critical parts," he added, declining to say when such joint work first began, stopped and then started again.

On Friday, Britain, France and Germany told the Security Council that U.N. sanctions relief for Iran, agreed under the 2015 nuclear deal, would continue beyond Sunday, despite Washington's assertion.

In letters to the Security Council on Saturday, China's U.N. Ambassador Zhang Jun and Russia's U.N. Ambassador Vassily Nebenzia both described the U.S. move as "illegitimate" and said the U.N. sanctions relief for Iran would continue.

Also on Saturday, U.N. Secretary-General Antonio Guterres told the Security Council he cannot act on the U.S. declaration that U.N. sanctions had been reimposed because it was not clear whether they had snapped back.

"It is not for the Secretary-General to proceed as if no such uncertainty exists," he said.