Various measures kick in at local businesses amid anti-virus efforts 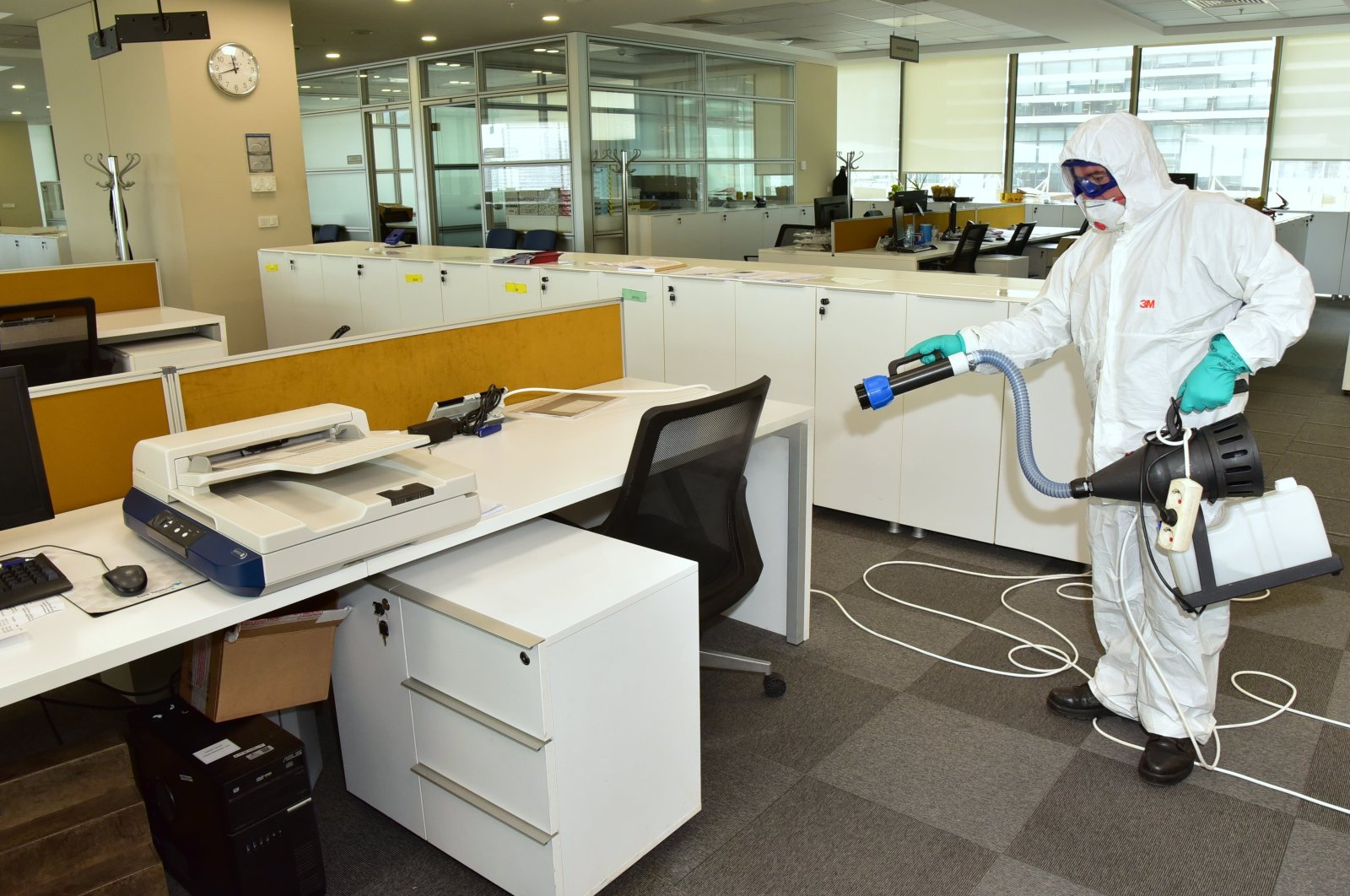 A man seen with a disinfection equippment in an office in Turkey. (IHA Photo)
by DAILY SABAH Mar 10, 2020 3:48 pm
Edited By Ayşe Betül Bal
RECOMMENDED

Businesses in Turkey, including large-scale holdings and small- and medium-sized enterprises (SMEs), have stepped up efforts to prevent the new virus from China from infecting the local population. The virus has spread to over 100 countries. So far Turkey is among the few countries without any confirmed cases.

On top of general measures by the country’s health ministry, the precautions taken by public and private sector businesses have centered on providing hand sanitizers on employees’ desks, reducing the use of public transportation, limiting business visits abroad and even implementing compulsory leave for those who have recently traveled abroad.

Turkey has already closed its borders with countries that were severely affected by COVID-19, a new type of coronavirus that emerged late last year in the central Chinese province of Hubei and has claimed more than 3,500 lives around the world, mainly in mainland China. Turkey has also halted flights to and from the virus-hit countries, including China, Iran, South Korea and Italy.

Kemal Şahin, chairman of Şahinler Holding told Turkish daily Dünya that they had already taken precautions like warning their employees to stay away from crowded places as much as possible. The company that created emergency plans for the possibility of the spread of the virus in Turkey, carries out production activities in other countries as well, including Germany, France, Bulgaria and Egypt.

“We provided bus services to office buildings to prevent our employees from using public transport,” he said, noting that the company is currently avoiding public events like fairs.

“Besides, instead of having meetings with 40 to 50 people, we have started arranging meetings between three to four people,” he added.

Saran Group is also one of the corporations in Turkey that has limited foreign travel for its employees. Kale Group, on the other hand, has postponed its business travels to East Asian countries altogether. The company is also said to provide “travel kits” for its employees in case of compulsory business trips abroad.

Several automotive companies – including Peugeot Turkey, Renault Mais Turkey and Ford Otosan – said they have increased the use of video conferences instead of face-to-face meetings.

Banking and finance offices are also on high alert against possible crisis scenarios derived from the spreading of the pandemic. Reports said that, even though the virus hasn’t emerged in the country and the emergency scenarios have not yet been implemented, the related sectors accelerated efforts for a possible crisis scenario. Financial analysts have been provided remote access and are ready to work from home when necessary. Many banks are giving 14-day compulsory leave to employees who recently returned from abroad.

Istanbul Shopping Mall Administrative Director Kemal Baştürk said the precautions are limited to health training for employees at the moment since the virus hasn’t emerged in the country yet, noting that, however, they have been disinfecting the mall building.

“We have prepared crisis scenarios for different levels of situations in case of the emergence of the virus in Turkey,” he added.

Turkey, with all its related governmental bodies, has stepped up disinfection efforts since the outbreak started spreading across the globe. Mass transit vehicles are being disinfected all around the country. In Istanbul, the municipality decided to install hand sanitizers at metro bus stops. Sanitizers have been installed at 44 stops on the exclusive-lane bus line straddling between the far corners of the city’s Asian and European sides. The line carries thousands of passengers every day and is the most popular means of transit especially in rush hours. The Ministry of National Education also announced that they were using special disinfectants to keep schools clean against the virus threat.

Meanwhile, in an environment of stagnation in the world exports due to the virus, demands have been on the rise for Turkey’s machine industry.

Machine Exporters Union (MAİB) Chairman Kutlu Karavelioğlu said machine orders from Germany, the U.S., Italy, the U.K. and France have increased within just two months while the number of the machines exported to Russia has increased nearly 45%. The export revenue has also increased by almost 36%.

The total export volume of the machine industry for the first two months of 2020 was recorded at $2.9 billion, with a 5.2% increase year-on-year. Cooling machines and internal combustion engines led the way in the country’s machine exports.

Saying that the industrial production which had mainly concentrated in China may become more balanced in the near future, due to the coronavirus, Kutlu Karavelioğlu, head of the Machinery Exporters' Association (MAIB), added that the virus has emerged as a factor that is changing the route of manufacturing chains.

"Medium-term transition to ensure geographical changes in production centers will affect manufacturers in Turkey. Large-scale manufacturers that have mass-production capabilities will have difficult times until they establish alternative chains due to obstacles in reaching raw materials,” he said, noting that sub-industry, and manufacturers producing high-tech machines, on the other hand, will increase their capacity and share in the world trade.