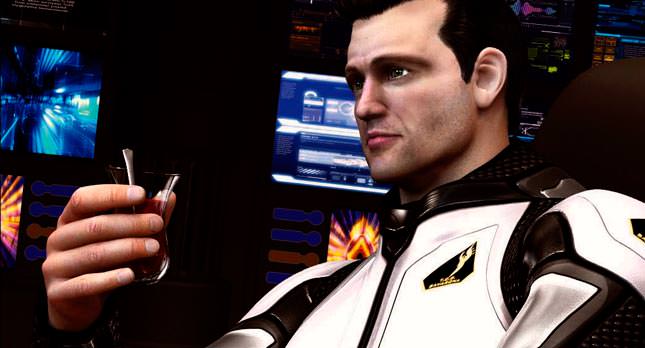 Turkey's first 3D animation cartoon "Uzay Kuvvetleri 2911," coming to theaters soon, features tea-drinking and kokoreç-eating Captain Murat and his crew taking on all kinds of baddies and saving the universe.

"Uzay Kuvvetleri 2911" has received international acclaim and the appraisal of renowned stop-motion artists.
The 3D animation will hit the silver screen on April 23, 2014. Even ahead of its premiere, the trailer impressed animation experts and fans all around the world. The crew became the first Turkish team to be invited to the world's most prestigious annual computer graphics conference in July 2013, SIGGRAPH (Special Interest Group on Graphics and Interactive Techniques). Directed by Michael Sahin Derun, the film follows the story of the TCG Savarona spacecraft and its crew as they fight to save an uninhabitable and chaotic universe. "Uzay Kuvvetleri 2911" also acquired the screening rights for a minimum of one week at Quad Cinema in New York and Laemmle Theater in Los Angeles, breaking further ground in Turkish film history.

In order to honor what might soon become a remarkable success story and pave the way for more Turkish sci-fi and animation films, we asked director Michael Sahin Derun to give some insights on his masterpiece.

DS: Why did you choose sci-fi for your first feature film? Is it a personal favorite?
Derun: There is a void in the sector.

The most recent sci-fi movie shot in Turkey was back in 1986 with "Dünyayı Kurtaran Adam" (The Man Who Saved the World). I am not trying to criticize the current Turkish film and TV series market, but what we are usually exposed to is movies on the underground world and mafia, and comedies… TV is full of matchmaking shows. The sector seriously lacks any kind of scientific films or shows. The kids do not have any real role models that they can look up to. We want Turkish children to look at the stars because it is where you look to and who you look up to that shapes your future. For example, "Titanic" director James Cameron would never have become involved in cinema if he wasn't hooked up on "Star Wars" back in 1977.

We have no idea about how the bullies and mafia guys, death and suffering on TV will affect children. They need more science and more knowledge in their lives, something educational.

Also, foreign animation films focus a lot on nature, animals, et cetera. Therefore, we chose to believe that science-fiction will be more beneficial for the youth of Turkey.

DS: As Animaj Animation Company, I believe you covered all of the project's expenses, without any sponsors.
Derun: We have no sponsors, no producers, and no support of any sorts whatsoever. We have a team of 12 people and throughout the whole three years we worked on this movie, the number reached around 30, including people who worked on the project on and off.

We created 270,000 frames, which is amazing on its own. Even if the film is not successful at the box office, as long as we build a devoted 20,000 person fan base that would be more than enough for me.

DS: "Murat Kaptan" has already become an online phenomenon. Who is the main character based on?
Derun: It wouldn't be wrong to say me actually, but then again it [the character] is a typical Turkish guy who is laid-back, likes to drink his tea and takes his time, who is into "kokoreç" (a Turkish specialty meal made with grilled sheep intestines). But at the same time he is very courageous and looks after everyone around him. The photo of him drinking tea in the spacecraft was shared on social networking websites.

DS: The trailer doesn't reveal much about the actual story. The film was also perceived as being political by some who saw the trailer. Can you give us more insight into the story and whether it has political connotations or not?
Derun: I didn't want to reveal too much in the trailer as I do not prefer it.
I just wanted to give some background on what happened to the species until 2911. Our heroes travel to another nebula, then fall into a black hole and find themselves on another planet. Then the struggle starts as the planet tries to steal the crew's technology. There is an enemy in the film but no real politics. And technology wise, Turks are a bit more advanced than other nations because that is what I would like to happen in real life. Americans also do it in their movies, so why can't we?

DS: The state-of-the-art technology used has already received critical acclaim abroad, especially at SIGGRAPH 2013. Were you expecting such achievement and interest even before the movie was released?
Derun: We are the first and only film that has been invited from Turkey to the conference and were introduced as the new stars, which made us incredibly proud. We were surrounded by all the big names of the industry.
The "Avatar" visual effects director praised us along with Tim Burton. One of Dreamworks' producers said, "You must be out of your mind," when he realized that there were only about 10 people behind the production. It was all very hard work, I agree, but I believe what came out in the end is worth it.

DS: Do you have any new movie ideas or any other projects in the short term?
Derun: I really hope this film achieves the success it deserves. I think sci-fi is one genre Turkey can compete in with Hollywood, both in terms of genius, storytelling and technology. I hope to make this happen.
We do have other projects in mind but we first have to see how "Uzay Kuvvetleri 2911" will be received.

Derun was in the team that won the award for Best Visual Effects at the Oscars for "Spider-Man 2" and a Primetime Emmy for "Babylon 5" in 1994, which he created in his garage. He worked on the "Star Trek" TV Series for seven years and designed the "Voyager," the first digital spacecraft in the sci-fi world. "The Matrix", "Tomb Raider" and "Demolition Man" are other big blockbusters that Derun has worked on. The movie is schedule for release on April 23, marking Independence Day and Children's Day in Turkey.