Cow in exile fails to engage 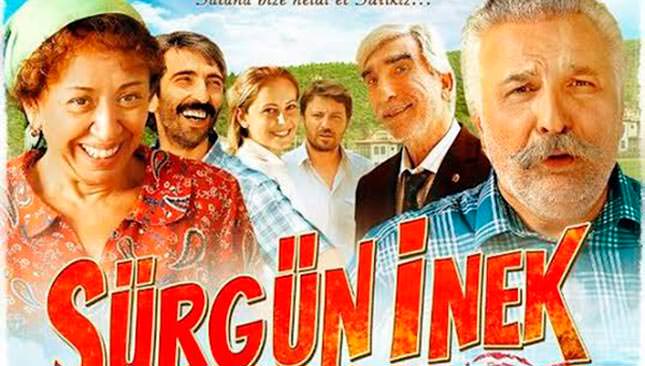 Based on a cow exiled for breaking the statue of Atatürk, "Sürgün Inek" features the story of the mass hysteria that broke out in her village.

Based on a true story, "Sürgün Inek," released today in theaters across Turkey focuses on the escalation of events in a small village in Malatya, an eastern province of Turkey, after a cow is declared guilty for breaking the bust of Atatürk, the founder of the Turkish Republic.

The film focuses on the mass hysteria that broke out in the village in 2009 in an overall atmosphere of fanaticism under the extreme militarist policies of the time.

Gülsüm the cow was loved by her owner and lived a normal life in Malatya's village of Kadirusagı until she felt disobedient one day and ran away. Her destiny changed for the worst the minute she entered the school ground. After she accidentally broke Atatürk's bust in the school garden, she was doomed for life. The Ministry of National Education perceived the act as offensive and took immediate action to find the responsible party. The whole village was cross-examined and panic broke out.

The good-hearted, middle-aged couple who own the cow, Sevket and Cemile, lead a peaceful life tucked away in their little village.
After the incident, things escalate and even the villagers, who once stood up for the clueless cow, start looking for Sarıkız, Gülsüm's impersonator. Things get even messier and a lot funnier when a group of activists show up in support of the condemned cow.
Gülsüm's owner, afraid to be caught and convicted under the oppressive policies of the time that placed too much significance on symbols, sent Gülsüm in exile to live with other family members in a village nearby.

Gülsüm's story is hearth-breaking, thought-provoking and funny all at the same time. The long-awaited film was promoted as the "funniest film of the last millennium" by its producers. The film does not disappoint to put a smile on one's face with clever scenes portraying the absurdity of the incident and the social hysteria that ensued. Unlike what would be expected from the political and social significance of the choice for the storyline, it shies away from touching on the oppressive atmosphere of the time that restricted personal and religious freedoms. Just like the film's star, Esref Kolçak, who plays Mikail, emphasized, the film tries to remain impartial. "The project is neither political nor religious," Kolçak said when asked about the timing of the release of the film.

The exciting cast, amongst many others, includes Yesilçam's veteran actor Kolçak, who is back from a filming break in the first comedy role of his long and successful career.

The movie also stars Hasan Kaçan as Sevket Çetin, Sebnem Dönmez as Cemile Çetin, Fırat Tanıs as Nihat Çetin, Yılmaz Gruda as Cebrail, Tarık Papuççuoglu as Kenan, Vildan Atasever as the school teacher Miss Gülay and Cezmi Baskın as Muhtar Sami. The movie was filmed mostly in Bozüyük, in the southeastern Turkish province of Mugla.
The film crew tried to use locals as extras, who are very much used to the big film sets as the popular TV series "Baba Ocagı," the movie

"Dabbe" and other Turkcell commercials were shot in the region. The script is written by Serkan Öztürk while the movie is directed by Ayhan Özen. Öztürk said the aim of the movie was to make a colorful, fun film fuelled by a strong cast.

The film crew released a video clip of the main song sung by Cahit Berkay, a member of the classic Turkish rock band Mogollar, who also composed music for numerous soundtracks. The clip immediately became a hit on the Internet and went viral.

Although "Sürgün Inek" is the first film focusing on the post-modern coup era and stories from the aftermath of Feb. 28, a 12- part documentary, "The Last Coup: February 28," very accurately portrays the atmosphere and factors that led to the eventual soft overthrow of the government and discrimination against a wide sector of society.

Directed by the renowned Turkish journalist and writer Mehmet Ali Birand, the documentary contains more factual information although it too fails to address freedoms that were oppressed at the time.
The gala for the movie was held on Tuesday at the Maslak Tim Show Center. The movie will be screened in theaters across Turkey today.