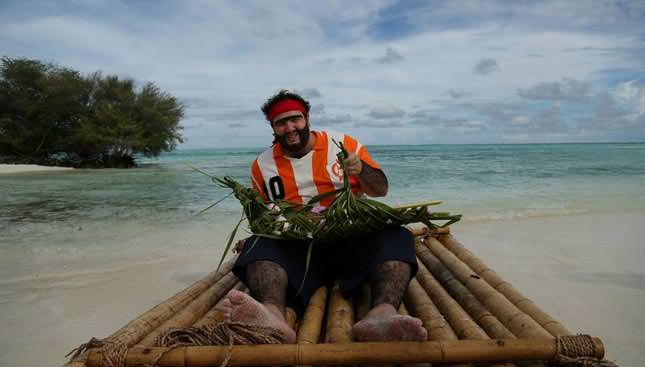 ISTANBUL – But what is the secret behind the appeal of this character from the ghettos of Istanbul, who is rude, sometimes to the point of being obnoxious, to Turkish audiences?

Şahan Gökbakar's onscreen persona, Recep İvedik, won the heart of a nation. And the frenzy does not look like it will die any time soon, now with plans to release a soundtrack for the fourth sequel to movie. Jingle-Jungle, a music production company renowned for its advertisement jingles, is currently working on the album, set to release later on this month. The company also released soundtracks for other famous Turkish movies, including "Yahşi Batı," "İnşaat" and "Komiser Şekspir."

The fourth installment of the "Recep İvedik" sequel depicts İvedik's adventures between his lonely life in a dodgy neighborhood in Istanbul and his adventures on a deserted island in the Maldives. Accordingly, the soundtrack will feature songs that best represent the two widely different worlds. From arabesque to blues, from Turkish folk music to Latin music, the soundtrack will represent the colorful character of İvedik.

The theme song features the three-string bağlama played by Ali Yılmaz and on percussion and bowed instruments Onur Nar. For composing music for the scenes of the movie shot on the island, the production company consulted Cuban musicians to better reflect the island mood. Musician Ömer Özgür and owner of the music production company said he played the guitar for the soundtrack and worked on the themes that will promote the movie in the best manner possible. He also consulted Gökbakar's opinion throughout the compilation of the soundtrack, especially when creating themes.

The movie broke two records within its first week, but it looks like those will not be the last, according to the new figures for the weekend of March 7 to March 9. "Recep İvedik 4" was viewed by 662,868 people that weekend, bringing the total number of viewers to nearly 5.4 million since its first release on Feb. 21. "Recep İvedik 4" became the most-watched movie in Turkey by setting a new record with 1.64 million viewers in its first three days on the silver screen. The movie closed its first week with 2.86 million viewers, breaking yet another record and earning the creator and the main actor Gökbahar approximately TL 10 million per week.

But what is the secret of the success behind this movie sequel? It is one of those phenomenons that even the most snobby movie critics could not easily dismiss. Even the stiffest movie-lovers who look down upon the film cannot help but laugh at some of the jokes, even if in secret. Is it the acting? Yes, Gökbakar's performance is definitely one of the reasons behind the movie's success.

Gökbakar and the producer decided to shoot the movie series after the wild popularity of his skits on his TV show, thus guaranteeing an instant fan base.

While a critique of the urban condition of man, the skits also highlighted and mocked a difficulty specific to Turkey, that of being stuck between tradition and modernization from the West, says sociologist Şule Eren, whose area of expertise is urbanization. "What the upper classes and the elite in the city despise in any other façade of life is transformed into a hero on the screen," Eran said. "Your lower-than-average kind of guy travels to places the audience can never dream of and meets people the audience will never have a chance to meet. Considering that majority of Istanbul's citizens reside in the ghettos due to tough living conditions and also since majority of cinemas are located in cities, the residents see something familiar in such a hero, stuck between two lives."

Eren further noted that for the upper class, such movies offer a safe zone and a chance for ids suppressed by social norms to be released.
While a critique of the urban condition of man, the skits also highlighted and mocked a difficulty specific to Turkey, that of being stuck between traditions and modernization from the West.

While perhaps slightly exaggerated at times, the mimics and the gestures of the character and Gökbakar's comedic skills in general presented a version of a man stuck between his local traditional Turkish coffeehouse and Starbucks. The chubby and extremely hairy İvedik also proves that Turks are not afraid to mock themselves.

With huge marketing efforts and budget behind the film, the money was well-invested as it attracted a large segment of the ever-growing Turkish movie audience.

The success of the movie could also be related to the troubled times. As people face tensions in their daily lives, many turn to entertainment for an escape. In this way, comedy becomes the drug of the masses as evidenced by the success of other Turkish comedies, such as "Eyvah Eyvah" and "Düğün Dernek," both of which broke records.

The final movie in the sequel, directed by Gökbakar's younger brother, Togan Gökbakar, focuses on İvedik's adventure to win a competition held on a deserted island in the Maldives similar to "Survivor" in order to save the football field for his local team.