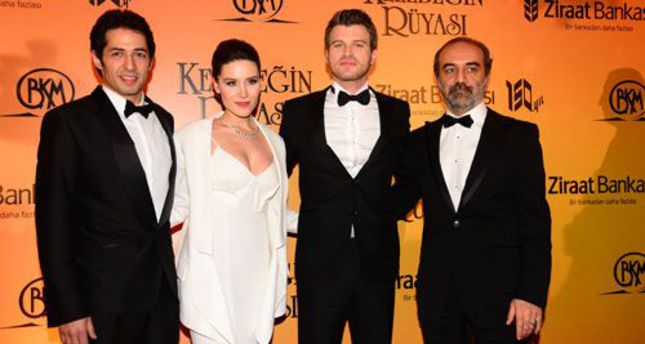 by daily sabah Mar 16, 2014 12:00 am
ISTANBUL – Many important and well-known names in the film industry, including actors and actresses from Turkey and Germany, attended the 19th Germany-Turkey Film Festival's opening night held last week in Nurnberg. The festival includes short films, documentaries and features from both countries and this year welcomes 71 artists who will hold panel discussions and screenings of 49 films throughout the 11-day event.

Nurnberg Mayor Dr. Ulrich Maly, Bavarian Finance Minister Dr. Markus Söder and Turkish Consul General of Nurnberg Asip Kaya were also among the speakers at the opening ceremony. Maly delivered an opening speech and noted the importance of such festivals for bringing countries closer to one other.

Veteran Turkish actress Hülya Koçyiğit presented the lifetime achievement award to the German director Edgar Reitz, who is the guest of honor this year with three films.

Furthermore, Tuncel Kurtiz, the legendary actor who died last year was commemorated at the ceremony and a selection of scenes from his movies was shown.

This year the festival honors one of Turkish Hollywood's legendary actors and directors, Yılmaz Güney and his 1971 film, "Acı" (Pain). The film stars the director himself and another legendary Turkish actress Fatma Girik, who is also a guest of honor at this year's festival along with actor Edgar Reitz.

Ten Turkish and German films will compete in this year's feature film competition.

Veteran German filmmaker and professor of film Edgar Reitz's life and work will be honored at the festival. A pioneer in German cinema, Reitz founded the Institute for Film Design, where he taught film directing and camera theory. He was also part of Oberhausen Manifesto, which caused young German filmmakers to demand nothing less than a new form of cinema. "The old film is dead. We believe in the new film," red the manifesto.

Reitz played a significant role in shaping the concept in the following years. Awarded at various renowned festivals including the Venice Film Festival and Moscow International Film Festival, in 2004 Reitz was honored with the Carl Zuckmayer Medal by the state of Rhineland-Palatinate for his life's work, plus he received the Master of Cinema Award of the International Film Festival of Mannheim-Heidelberg. Two of his films from the "Heimat" series, which is the overall title of several series of films in 32 episodes depicting life in Germany between 1919 and 2000 through the eyes of a family in Rhineland, and "Der Schneider von Ulm" will be shown at the festival.

The world cinema section offers a rich collection of German and Turkish films. This year, among the Turkish movies is Yeşim Ustaoğlu's "Araf," "Benim Dünyam" directed by Uğur Yücel and a rare copy of veteran Turkish director Muhsin Ertuğrul's silent movie, "Kara Lale Bayramı." Ertuğrul is often deemed the founder of Turkish theater and cinema and it was long-thought that this particular film, depicting the Netherlands in the midst of its battle for independence, had been lost. The screening will also feature a piano recital by Marie Luise Droop. "Hayat Boyu" by Aslı Özge, "Hükümet Kadın 2" by Sermiyat Midyat, "Kelebeğin Rüyası" by Yılmaz Erdoğan and "Biz" by Miguel Schütz and Carsten Degenhardt are among the other films to be screened at the festival.

The Turkey-Germany Film Festival is known to be the most important event in Germany that contributes to cultural dialogue between the two countries. Thanks to its successful activities, the film festival was awarded the Encouragement Award of Nurnberg Municipality in 1995. During the International Ankara Film Festival in 2006 it was also awarded the Mass Communication Award.

The feature film Competition will present awards for best film, best actress and best actor from among five German and Turkish co-productions plus the People's Jury Award for the film chosen as a favorite by the festival audience.