Flood of complaints for Noah 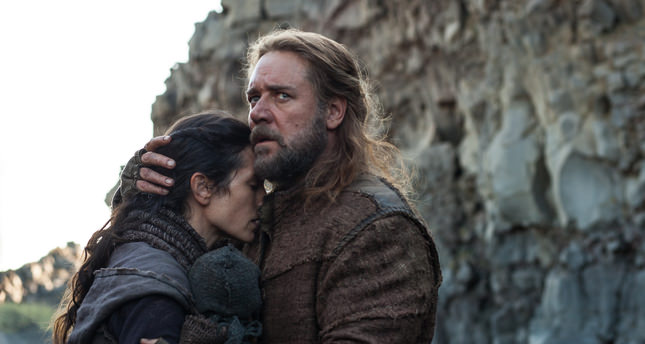 by Daily Sabah Apr 09, 2014 12:00 am
ISTANBUL — Despite huge success at the box office, director Darren Aranofsky's movie "Noah," which opened in cinemas across Turkey last Thursday, is continuing to stir controversy.

Muslim theologists in Turkey also joined in the discussion and many, like their Christian counterparts, have slammed Aranofsky's retelling of the flood story, which is mentioned in the Quran, Torah and Bible. The film features Russell Crowe as Noah in addition to Jennifer Connelly and Emma Watson.

Of the theologists who criticized the movie in Turkey, theology professor at Istanbul University, Dr. Abdülaziz Bayındır said, "this does not have any theological-religious basis."

Marmara University's theology professor, Ömer Faruk Harman noted that there are verses in both the Quran and Torah telling the story of the flood and the events in the film do not match with either text.

Noting that the flood was meant as a punishment for disbelievers, he said that no person was present on Noah's ark and the film's depiction is completely incorrect. Assistant Professor at Sakarya University, Eldar Hasanov, said, "The film does not only threaten Islam but other religions as well... We do not know from where the information and background of the film was taken. Many people perceive the historical and religious facts they see in movies and on TV as true facts and I believe this movie will be misleading many."

The main criticism from the Muslim world thus far was about the portrayal of a prophet in a film.

The big budget Hollywood epic was criticized for being "irreligious and contradicting the stature of prophets and messengers," as the film violates Islamic rules by portraying a prophet. Qatar, Bahrain, the United Arab Emirates (UAE) and Indonesia have already banned the film and Malaysia has been recently added to the list. "The film 'Noah' is not allowed to be screened in this country to protect the sensitivity and harmony in Malaysia's multiracial and multi-religious community," said the chairman of the Film Censorship Board of Malaysia, Abdul Halim Abdul Hamid in a statement.

Earlier, the Egyptian Sunni Muslim institute Al-Azhar said it prohibited the screening of movies showing such figures and said the film would antagonize the "feelings of the faithful."

Christian conservatives have also objected to the inaccurate portrayal of the biblical account of the flood for months. The highly conservative National Religious Broadcasters (NRB) noted in February that they wanted to "make sure everyone who sees this impactful film knows this is an imaginative interpretation of scripture, and not literal." Paramount Pictures then responded to this request by adding a disclaimer to the marketing materials for the movie, saying "artistic license has been taken" in telling the story.

Clashes have also been reported between the studio and the director.

Paramount Studios had the final cut approval over the film and allegedly made an alternative, a more religious version than Aranofsky's one, but pulled it back when the audiences didn't prefer the montage of religious imagery and the addition of a Christian rock song at the end.

Although Aranofsky described the film as "the least biblical film ever made," various Christian groups and reviewers have criticized the film for what they say removes the meaning of sin and twisting the story to glorify it to fit the Hollywood agenda. "This is not some attempt to tell the Bible story.

They want to turn it into an Action/Adventure," said Dan Gainor, the vice president of Business and Culture for The Media Research Center.

While the discussions and criticism continues, "Noah" topped the box office in its debut weekend in the U.S. and has drawn many to theaters in Turkey since it opened last Thursday. "Noah" might not be the only film this year which will draw criticism from religious societies as other religious films including "Son of God" and "Exodus," directed by Ridley Scott and featuring Christian Bale as prophet Moses, will soon hit the screens.
Last Update: Apr 09, 2014 1:19 am
RELATED TOPICS