Noah's test with the great flood 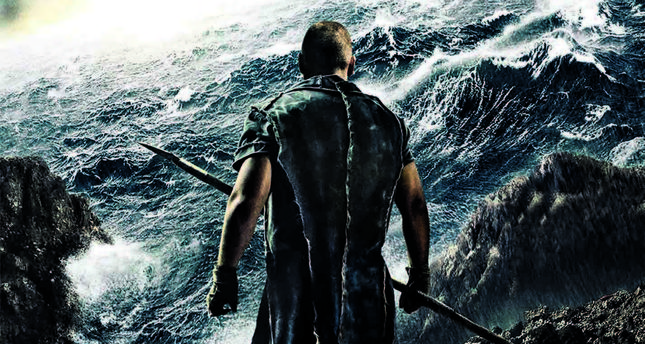 The movie world, after ignoring it for decades, faces the most famous biblical story of all. Aranofsky, known for 'Pi' and 'Black Swan,' now takes on the flood of complaints and a good cast to create a special effects masterpiece

ISTANBUL — The widely-debated and provocative 'Noah: the Great Flood' is a film based on the biblical story from the point of view of director Darren Aranofsky, one of the few directors willing to undertake such an endeavor.

It takes courage. His last film, 'Black Swan,' caused quite the stir in the art world. He is now back to cause even more controversy.
Was it all worth it?

The movie world was somehow not interested in Noah's story until today, with only one film portraying the story at the beginning of the last century followed by just a mini-series.

However, pursuit of the remains of the ark of Noah was featured in various documentaries.

For the first time in decades in a huge undertaking, the story has been brought to the big screen by director Darren Aronofsky.

Noah is the ultimate savior of the heathens in his tribe who are descendants of Seth, one of the three sons of Adam, trying to make them find God again but his calls go unanswered.

Then he is ordered to build a ship as the great flood is on the way. We all know the story: He takes with him a pair of every animal on the planet to ensure both mankind and the animal kingdom survive the flood. Aronofsky first got under our skin with "Pi," a film that won him Best Director at the Sundance Film Festival. Then came "Requiem for a Dream," his highly emotional and critically acclaimed drama, followed by "The Fountain," "Wrestler" and the "Black Swan," which won Natalie Portman the Oscar for Best Actress at the Academy Awards. Aronofsky, by taking his time in between films, knows how to mature and build his own setting and atmosphere. No matter how different the themes and stories are, he never falls back from taking a trip to the depths of the human soul. He referred to some sections of the Old Testament, but did not forget to present a different perspective on Noah's life. Apart from his divine character, Noah is described with his humane fragilities.

No doubt, Aronofsky's interpretation has and will continue to draw criticism. Still, it is surprising that Noah is depicted not only as a prophet, but also a human. It is further impossible not to be influenced by his sense of responsibility toward God and the creatures, along with the storms breaking out in his soul. Astonishing visual effects Apart from the film's subject, the visual effects are enchanting. Creation plans, angels turning into stone, Noah's dreams about the great flood, scenes depicting the animals going onboard in twos, a suddenly created forest and the flood are vividly portrayed when brought to the film screen. The audience experiences creation and the great flood through extraordinary visuals. Further, the bone-dry nature and the scenes describing people crushing each other for food is impressive.

Russell Crowe seems a perfect fit with Noah's character in terms of his physical appearance and mood. The performance of Jennifer Connelly is rather convincing as Noah's wife. Logan Lerman as Ham and Emma Watson playing the character of Ila are surprisingly stepping forward. The impressive success of Nick Nolte and Anthony Hopkins are worth mentioning. Above all, "Noah: the Great Flood" stands out with its striking visuality and successful performers. The film's story is open for discussion. Let's wait for the next surprising project of senior director Aronofsky.
Last Update: Apr 19, 2014 12:04 am
RELATED TOPICS