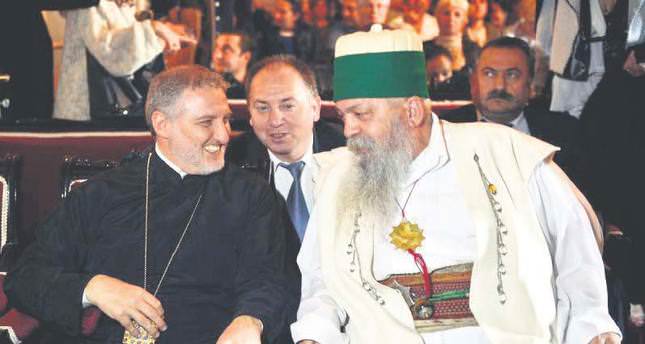 by AA Apr 29, 2014 12:00 am
ISTANBUL — Metropolitan Bishop of Bursa and Abbot of the Aya Triada Monastery Elpidophoros Lambriniadis and Albanian Bektashi community leader Edmond Brahimaj were among the guests for a special screening of "The Savior," a film by Palestinian director Robert Savo.

Lambriniadis expressed his gratitude to the Heybeliada's Halki Greek Orthodox Seminary for hosting the screening and added, "The Savior is a fascinating film performed by Palestinian Muslim artists. It depicts the story of Jesus. We are happy to host this event here." In his official statement to the press, Lambriniadis pointed out that the clerical school is in continuous dialog with the Islamic world and that it established close relations with the Bektashi community. "The main objective of our school is to promote the Islamic world from a different perspective.This is because the West does not properly know about Islamic practices.We have been living in Turkey for many years and know how to introduce Islam to the West," he said.

American film producer John Dorr explained that they made a different film on the life of Jesus. The film reflects Palestinian culture and all scenes were shot in Bulgaria and Jordan.

"As with other countries around the world, the Middle East and even Jerusalem suffer from oppressive and unjust incidents because of wars and rebellions," said Savo, who added that his film is a call for people from different races and religions to live together and tolerate each other.

Based on the Gospel of Luke, the film focuses on Jesus from birth to death in 135 minutes. "The Savior" embraces modern cinematography techniques. Composed by Jordanian Talal Abu al-Ragheb, the film's score was performed by female vocalists from the Bulgarian National Choir "Philip Koutev" and male vocalists from the St. Romanus the Melodist Choir.

The school is still closed for instruction, however functions as a monastery and occasionally hosts cultural events such as concerts and congresses.