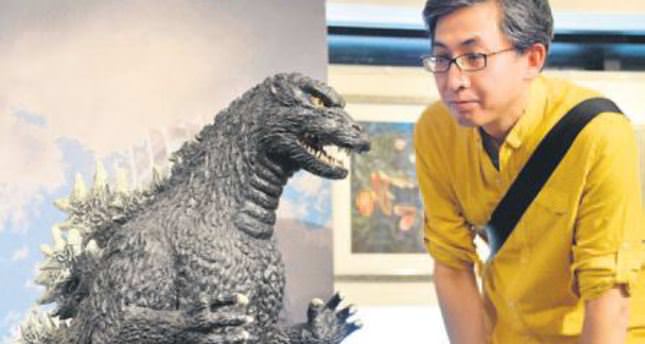 by May 03, 2014 12:00 am
TOKYO — Japanese fans of Godzilla say the newly- unveiled monster, set to star in a Hollywood reboot of the post-war classic, is too fat and has been "super-sized" by a country used to large portions.

The latest version of the giant amphibian will hit 3D screens in the United States on May 16 and in Japan two months later as the firebreathing Japanese lizard marks its 60th anniversary this year.

Trailers for the film and promotional stills have begun circulating, as marketers look to build excitement, but Japanese fans said their hero was a little chubby.

"Only the silhouette of the new Godzilla had been seen before," said Fumihiko Abe. "When I finally saw it, I was a bit taken aback".

"It's fat from the neck downwards and massive at the bottom," said the 51-year-old, who said he has seen every Godzilla movie ever made. Abe said the 1998 Hollywood version was more "like a fast-moving dinosaur" instead of a big-footed monster.

The computer-generated creature's rampage through New York was dismissed in Japanese cult circles as no match for the giant beast that terrorized Tokyo for decades.

However the new version was more promising, said Abe.
"I can feel the mightiness of Godzilla from this new one. I'm interested in seeing how the heaviness is expressed in the new film," he told AFP as he visited an exhibition of Godzilla paintings in Tokyo.

But other fans gathering online were lessthan approving, with one saying it looked more like a seal and another dubbing it "marshmallow Godzilla".

"It's done a 'super-size me'," one person commented, a reference to the larger meals available at US fast-food restaurants.

"It's true that you gain weight in America.

"It's a calorie monster," one said.

Godzilla dates back to 1954's "Godzilla, King of the Monsters," the first of a series of ground-breaking monster flicks made by Tokyo's Toho studios. Back then he was a 90 kilogram (200 pound) latex creation that left the actor inside breathless and soaked in sweat, with special effects relying on piano wires, pulleys and firecrackers. From the moment Godzilla rose out of a roiling sea and began his swim to Japan, it was clear he was a product of the US atmospheric hydrogen bomb tests at Bikini Atoll in the South Pacific in the 1950s.
The creature born of the nuclear age became a symbol of a pacifist Japan and the horrors of the atomic bombing of Hiroshima and Nagasaki that ended World War II.