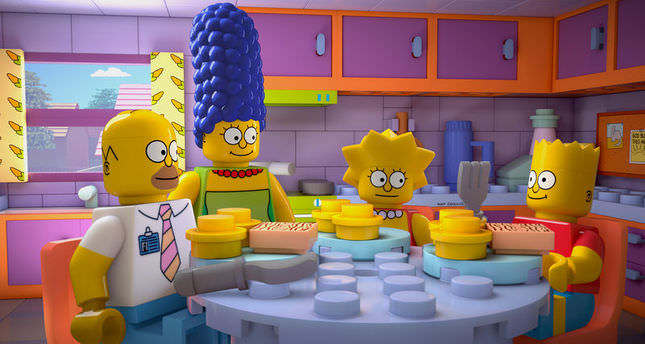 by May 03, 2014 12:00 am
LOS ANGELES — The alternate reality occupied by "The Simpsons" has always provided a skewed version of life in the modern world.
Now for the 550th episode of the longest-running prime-time show in U.S. television history, "The Simpsons" is about to get even weirder.
The episode, set to air Sunday night on U.S. television, will see the Simpson universe converted from its usual fleshy cartoon form into computer generated Lego blocks, all slick, hard and shiny. Everything in the world is made of plastic bricks. The concept goes so far as to portray comic-style bubble thoughts as Lego cubes, and to portray a church scene in which the bible tells a plastic creation story. The episode starts with Homer Simpson discovering he can have fun with daughter Lisa by playing Lego together, which transports him to a land of plastic bricks. But while he does enjoy the cleanliness and predictability of his new Lego world, Homer eventually decides that the messiness of his normal environment is preferable. According to Matt Selman, the show's producer, work on the Lego project started two years ago before the crew had any idea of "The Lego Movie" currently in cinemas.