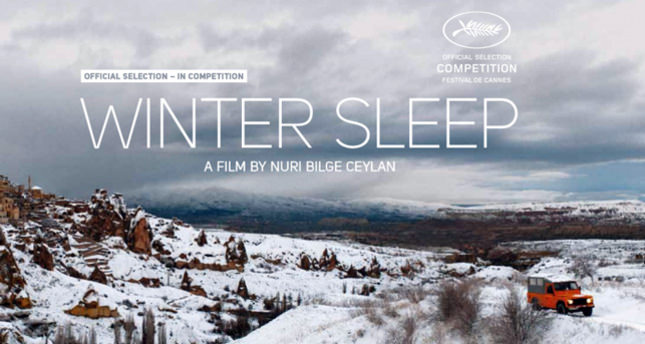 by Daily Sabah May 05, 2014 12:00 am
CANNES — Following his extraordinary, labored Turkish drama Once Upon a Time in Anatolia, director Nuri Bilge Ceylan is back with not only one of our most-anticipated films of the Cannes Film Festival line-up, but of the year as well.

Debuting this month at cinema's finest yearly event is Winter Sleep, a drama clocking in at 3 hours and 16 minutes.

The Turkish drama 'Winter Sleep' by Nuri Bilge Ceylan is presented in competition at the 67th Festival de Cannes.

A photographer's filmmaker Nuri Bilge Ceylan (Turkish, 55 years old). Ceylan has been hovering around the world cinema A-list for over a decade, though his expansive 2011 feature "Once Upon a Time.in Anatolia" plainly sealed his place there.

Having developed an interest in film in his twenties, he made his first short, "Cocoon," in 1995; it played at Cannes.

Story: Aydın, retired actor, holds a small hotel in central Anatolia with his young wife Nihal, whom he is emotionally distant, and his sister Necla still suffering from his recent divorce. In winter as snow covers the steppe, the hotel becomes their refuge but also the scene of their anguish....