'24' returns along with its controversial legacy 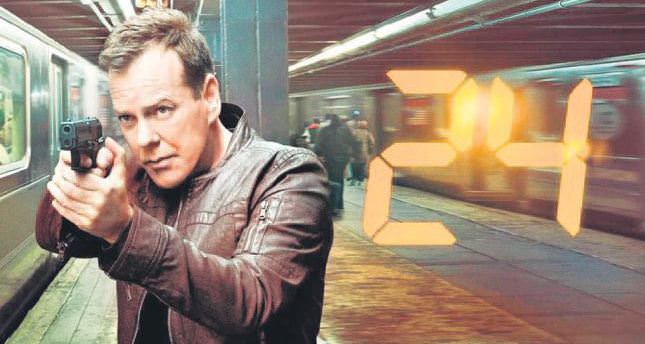 by Kaya Genç May 10, 2014 12:00 am
There is no easy way to say this. In the first decade of the 21st century, when most civilized people spent their days reading proper novels, visiting the gym, flirting with prospective lovers or walking in the woods, I watched all episodes of the television series "24." I watched a total of 192 episodes in the course of eight years. It took me 192 hours (or eight full days) to reach the finale and when I got there, there was still "24: Redemption" to attend to. I devoured that film-length extra episode. I even bought the soundtrack album. While commuting through various neighborhoods of Istanbul, I listened to Sean Callery's theme songs. I was aware of the increasingly poor quality of the show's plot and its music but like a hopeless addict, I just couldn't get enough of them.

When I saw posters of "Live Another Day," the new season of "24," on the walls of my local subway station (its premiere aired on FX this week) I couldn't help but remember those old days of addiction. In 2001, a year in which Istanbul seemed to be filled with a wide range of suspicious citizens, "24" seemed to have arrived at the right moment. Thanks to the discourse of Turkey's mainstream media, our eyes were trained to see Muslims, Kurds and foreigners (Americans, Britons and Italians in particular) as terrorists, or friends of terrorists. Suspicion was in the air and "24" did its best to strengthen our already established fears of the "other."

Jack Bauer, the counter-terrorism agent with a Germanic surname and an insulting way of talking to others ("Move! I said move! Do it now!"), was willing to protect the safety of the homeland by any means necessary. One couldn't make an omelet without breaking eggs was the underlying message of the series. Bauer would announce his first day to be "the longest day" of his life. His objective in the course of that day and the following seven days in the ensuing seven years, had not been to stay alive, but to save his country, his nation, and the world (it fell short of "the universe" whose protection fell to the shoulders of He-Man).

First aired two months after the 9/11 attacks, "24"s pilot episode presented us with a curious mixture of paranoia and suspense, peppered with varying doses of xenophobia, Islamophobia and neo-conservatism which were together served through the use of split-screens and a constantly ticking clock. The series finale, aired in 2010, showed Bauer through the lens of a drone camera, which his computer analyst sidekick Chloe turned off so that our man could go into hiding.

Like many fans, I felt sad to part with Bauer whose chief talents include torturing individuals he had been ordered to capture. The last images of the finale showed him as he disappeared into nothingness, the clock stopped ticking and that was that. We forgot about Bauer for four years until his magical resurrection this week. Jesus famously resurrected his friend Lazarus from the dead. I wondered who was responsible for breathing the breath of life into the nostrils of Bauer. The answer is Howard Gordon, better known nowadays as the creator of "Homeland," another controversial series that takes the world by storm ("Homeland"s next season will probably take place in Istanbul).
Together with Robert Cochran and Joel Surnow, Gordon's team of writers proved their expertise at representing issues on screen which many would choose to stay away from because of political sensitivities.

During the first season of "Homeland" we watched the adventures of an American marine, who had been turned by al-Qaeda while in captivity. He has become a devout Muslim while executing a master plan to destroy the top strata of the American administration.
At a time when American society became increasingly Islamophobic "24" offered similarly problematic plots. The show's writers led us to believe that a Muslim family had been plotting an attack against the U.S., only to point the finger in the following episodes to the direction of another ethnic group and showing the former's innocence. Upon convincing the viewers about the meaninglessness of their racial prejudices, the writers introduced another plot twist and lo and behold, it turned out that the Muslim family in question included terrorist members indeed.

The creators of "24" excelled at making fun of our prejudices. They played with them and ended up strengthening them. In a brilliant article for the Guardian newspaper, the Slovenian philosopher Slavoj Zizek (he is a reluctant fan of the series) compared Bauer to colonel Kurtz, the protagonist of Joseph Conrad's novel "Heart of Darkness" and Francis Ford Coppola's film adaptation, "Apocalypse Now." Zizek wrote: "He was the perfect soldier but, through his over-identification with the military, he turned into the embodiment of the system's excess and threatened the system itself." He went on to compare Bauer to Heinrich Himmler, the Reichsführer of the paramilitary Nazi organization Schutzstaffel (SS) and one of the masterminds of Nazi concentration camps.

While organizing the details of the extermination of Jews, Himmler had "to make sure that the executioners, while performing these terrible acts, remained human and dignified." That "24" presented us with Bauer's personal life was, in Zizek's view, its sinister way of humanizing the murderous actions of its protagonist.

During 2000s, "24" became one of the most watched television shows among American soldiers and marines. The show's producers admitted to being briefed by members of military top command who asked them to "tone down" torture scenes. Those images of violence inflicted by Bauer on the enemies of the U.S. had affected the behavior of their personnel, they said. But "24"s connections to the policies of the American administration of its time were not confined to those scenes. The so-called "ticking time bomb scenario" was justified through shows like "24" which asked their viewers to decide whether torture of a terror suspect was justified, if the knowledge gained through that act would stop a bomb from detonating and save a great number of lives. In "24" Bauer makes this decision in the name of American people.

If it will save the lives of 10 people, Bauer is more than happy to sacrifice his own life. But if his sacrifice will prevent the arrest of a terrorist who will kill millions, then it will be those 10 people, rather than himself, who has to be sacrificed. It is all about statistics and numbers, you see.

The producers of the show could change the title of "Live Another Day" to "24 in the age of Edward Snowden, Julian Assange, mass surveillance and the WikiLeaks." This season is 12 hours long. It was shot on location in London. The main difference from the classic format of "24" is the inclusion of hacktivists and Assange-like characters in the cast. I am not sure whether the new season will be good or rubbish but it will be interesting to have "24," one of the shows that had popularized the notion of bingewatching television series at home, once again in our lives.