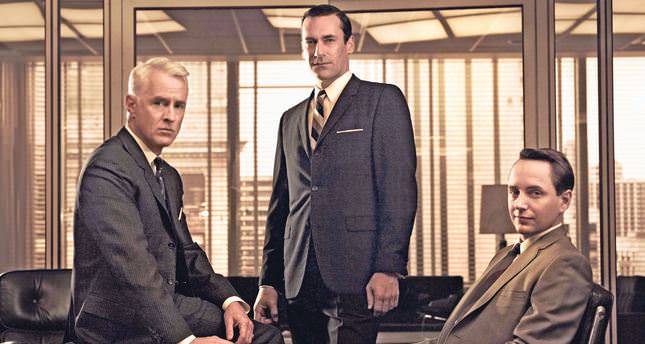 The first half of the final season of the acclaimed television series "Mad Men" ended last week and the series finale is scheduled to air in 2015. As fans prepare to say farewell to the series we asked how "Mad Men" had become so successful

﻿What makes "Mad Men" so great? When its pilot episode aired in 2007, most viewers thought it was the performance of Jon Hamm, who played the lead character Don Draper, that made the production so successful. According to others it was the intriguing title sequence, which showed the fall of a man in a black suit from a tall building, that helped hold the audiences in the palm of the producers' hands.

Peggy Olson, a young Irish-American girl from a Catholic family, was another candidate used to explain the addictive quality of the show. We watched Peggy in her first day at the Madison Avenue office (circa 1960), where she began working as Don Draper's secretary. She later became his assistant, and in the final season, his boss. We easily identified with this ambitious character who led us into the wealthy and amoral world of advertising executives.

Last week, as I watched the finale of the first part of "Mad Men"s final season, I asked myself, again, what it was that had made the series so great. The answer consisted of five words: "Smoke Gets in Your Eyes," the pilot episode of the show. It was so well-written and so lavishly produced that once the viewer watched the pilot, there was little chance she wouldn't watch the rest of the series.

In less than 50 minutes, the episode presented us with a miniature version of the 84 episodes that would come after it. Shot with a budget of $3 million (TL 6.3 million), and scripted by Matthew Weiner (who rose to fame with "The Sopranos"), the pilot featured chain-smoking characters who did their best to produce a saleable ad for the cigarette company Lucky Strike. Don Draper, a well-groomed, wellbuilt and very clever man, stole the show.

The viewers either wanted to be him, or be with him. Draper and his friends smoked so excessively, and with such little regard for their health, that their smokefilled lives added a nice layer of dramatic irony to the show. Draper had an affair with a beautiful artist and he seemed like he could get anyone he fancied. He was good at multitasking. While struggling to write copy for the Lucky Strike, Draper also worked for a department store owner who wanted to adjust the image of her business.

So the characters in "Mad Men" were very busy creatures. They lived life to the full. They were often adulterous, binge drinking, cynical, untrustworthy workaholics and perhaps this was the reason why we loved them so much. Bad shows idealize their characters and show them as perfect, kitsch creatures. Good shows, like "Mad Men," present their characters in all their imperfections.

I asked the question about the reason behind "Mad Men"'s success to Ali Arıkan, the chief film critic of Dipnot, and one of Roger Ebert's Far-Flung Correspondents.

How did he explain it? "'Mad Men's appeal has always been multifaceted: then again this is the case for all television shows that have been accepted into the pantheon," he said. "'The Sopranos' is equally wonderful as a too-close-for-comfort glimpse into a rotting soul as it is as a crime dramedy ridden with malapropisms. 'The Wire' is a slow-moving police procedural as well as a modern-day Charles Dickens novel.

And 'Mad Men' is essentially a work-place drama about the sort of people who are on the losing side of history as well as a misanthropic look at the changing mores of American society during one of the most tumultuous decades of human history."

Arıkan pointed to the differences between "Mad Men" and "The Sopranos." "'Mad Men' offers a slightly more optimistic view of human nature than 'The Sopranos' writing for which Matthew Weiner, the former's creator and showrunner, learned his chops as the boss of a fictional universe. Whereas 'The Sopranos' argued that a leopard couldn't change its spots and life is a hellishly Sisyphean ordeal, 'Mad Men' counters this by suggesting that things aren't always as bad as they seem." According to Arıkan, the series instinctively believes that people can change and rather than be overwhelmed by the rising tide of history, rise above it, and even surf on its waves. "['Mad Men' writers] believe that, yes, the nuclear family of post-war America had all but disappeared by the end of the '60s, but other make-shift, rudimentary families (be they at a Madison Avenue advertising firm or a hippie commune in upstate New York) had taken its place, at times with possibly stronger bonds.

If the essential message of 'The Sopranos' echoes Philip Larkin's stanza 'Man hands on misery to man, it deepens like a coastal shelf ', 'Mad Men' counters this [as per the final scenes of the show's most recent episode] by singing: 'The moon belongs to everyone. The best things in life are free.'" The best things in life may be free but they are finite as well. Many "Mad Men" fans, Arıkan and I included, hate the prospect of a life without the series. But when the final episode is aired in 2015, we will just have to learn to live without it.
Last Update: Jun 08, 2014 3:27 pm
RELATED TOPICS