Eternal rivalry for the throne in East and West 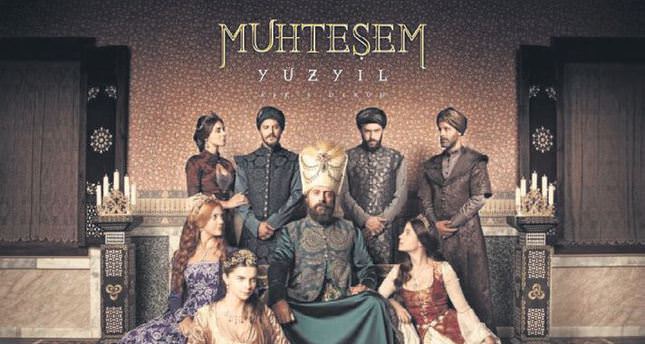 Once upon a time, there was a kingdom so vast, a land so fertile and a king - or a sultan - so determined and ambitious that he would do anything from killing anyone, even his own brother, who opposed his reign to disowning his son to keep the throne

With "Magnificent Century," Turkey's most exported and watched TV series in the near vicinity of Turkey coming to an end tonight and the fourth season of "Game of Thrones" is also about to be concluded, one can't help but wonder: What is the appeal of stories on blood spilled for a throne whether in the East or West?

Although the "Magnificent Century" is set in the East with roots based on historical facts around the reign of Süleyman the Magnificent, and "Game of Thrones" takes place in Westeros, a land unknown to the eyes of man, the heroic and epic nature of the stories, the themes of power struggle, honor and family along with beautiful women, powerful muscular men and shiny golden coins are some of the common themes in both shows. "Magnificent Century," which drew about one-third of prime time viewers to the screen and has aired in more than 45 countries worldwide, can also be compared with other shows like "the Tudors," which focuses on the reign of one Henry VIII and the challenges he faced during his time as king. Similarly, the biggest battle in "Magnificent Century" is to keep the throne, not win it. "Game of Thrones," on the other hand, is more complex with various side stories on the seven houses up for the throne, and the more ethical question of which house rightfully deserves it, adding more thrill, drama and a much larger cast to the show. Budgets and technology in addition to the geographical span both shows reach, are apparently different. Yet, the impact of women "behind the successful man" and the plots and ploys laid in the palaces are almost alike. We see poisoning, revenge, gossip and blackmailing in both series, and what is more is, it is mostly women who attempt such ploys. Daenerys has her dragons, Hürrem has her sons to rule Westeros is a land where insidious, sly women plot to rule akin to Anatolia. Daenerys with eyes set on the Iron Throne and Sansa Stark standing by Little Finger - the man who arranged the poisoning of King Joffrey in the fourth season - with a chance to still become the queen - asserts the notion that women are of somewhat more important players in the "Game of Thrones." But are they really?

Hürrem's influence on Süleyman and others in the palace is apparently strong. Throughout the whole series we see her plotting to ensure that her sons ascend to the throne and her avenging anyone trying to stand between her and Süleyman.

On the other hand, historical facts and cultural differences between the two series make it impossible for a woman to set her eyes on the throne in the Ottoman Empire, unlike the Mother of Dragons, Daenerys, in "Game of Thrones."

However, all women that have the chance to get close to the Iron Throne stand by a man or have to stand by their sons, including Daenerys, whose only chance to rule is through the three dragons she brought back to life. Daenerys and Hürrem's rise to "queendom" and the way both women hold onto their titles also bear a resemblance:

While one nurtures her dragons as her way to winning the Iron Throne, the other tries very hard to bear a son for the king and ensure that her son, not others, rises to the throne.

Further, both women established something that no woman has ever done before in their respective lands. Hürrem, the enslaved daughter of an Orthodox Ukrainian priest, broke two centuries of Ottoman tradition - a concubine becoming the legal wife of the Sultan against the wish and to the astonishment of the court and the city. Süleyman also allowed Hürrem to remain in the palace for the rest of her life, breaking yet another tradition; as soon as imperial heirs came of age, they would be sent to remote provinces of the empire together with the concubine who bore them.

Daenerys, on the other hand, brought back dragons that had been lost from the skies of Westeros for more than a century and a half. The last surviving dragons in the world were also possessed by House Targaryen, so Daenerys Targaryen - last survivor of the deposed House Targaryen - miraculously hatched three baby dragons from eggs, thus becoming the "Mother of Dragons." However, the risk she takes is similar yet more dangerous than any other mother. While you cannot pick and choose the character of your child, nor control his fate, dragons cannot be tamed, and in the forthcoming seasons, Daenerys is likely to struggle to keep what she brought back to life under control. The similarities between Hürrem and Daenerys end there. But Hürrem's fate is also parallel with Cersei Lan nister's.

The mother persona, who would do anything to keep her son on the throne, thus gaining direct reign over the empire is represented in both Hürrem and Cercei's characters. The fight Cersei gives to make her son, Joffrey - who as we all know is the product of her relationship with her brother, Jamie Lannister, the King Slayer - succeed to the throne and the vengeance she strikes cold-bloodedly upon her own brother, Tywin Lannister, declaring him the killer of her son, both indicate traits of a passionate and caring mother along with a greedy and extremely ambitious character. Times of the Ottomans more popular than ever A big Hollywood production like "Game of Thrones" becoming a worldwide popular show is not really intriguing considering the promotional campaigns and the budget reserved for marketing. The appeal of "Magnificent Century," on the other hand, indicates that the times of the Ottomans still preserve a source of mystery in the eyes of both the West and the East.

Even in Turkey, although we preserve more information on the times of the Ottomans, the era and life in the palace has not been reflected on TV in the Eastern world as explicitly and as gloriously as it has in "Magnificent Century." The splendor of the palace, the attempted poisonings, colorful gowns, the lust and greed have sparked interest in all things Ottoman. Along with many countries in the Middle East, the show became a major hit in the Balkans, which struggled to be freed of the Ottomans for five centuries, becoming prime-time's most watched show the first time it aired. It seems that the glory, the costumes and the overall "magnificence" of the times have made the Balkan nations make peace with the past they tried to avoid for so long. Heroes, knights, fierce killings in the name of lust and greed, family bonds, sacrifices, treachery and most of all, the glory keeps millions bound to their TV screens. And few things remain and will keep on remaining true; epics like "Game of Thrones" and the "Magnificent Century" sell, and wealth and power are never without a cost - independent of the region and the period, whether in fiction or nonfiction.
RELATED TOPICS