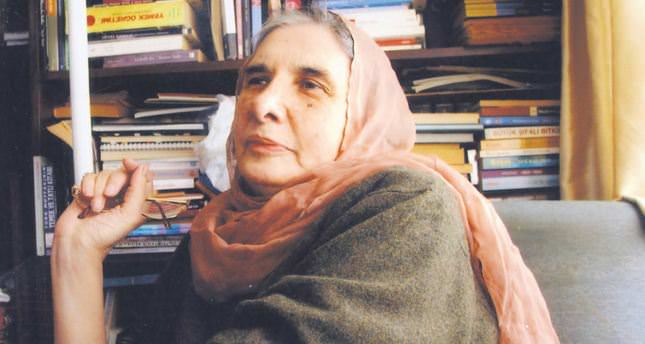 Ayşe Şasa, a prominent scriptwriter and thinker, passed away recently. In addition to her contirbutions to Turkish films like 'O Beautiful Istanbul', she was also a prominent thinker who had a special interest in the works of Ibn Arabi the philosopher

The late screenwriter Ayşe Şasa defined her life as "a spiritual adventure" depending on the changes she experienced in both philosophical and emotional meanings. Though she grew up in a wealthy family belonging to the high society of Istanbul, Şasa did not follow the lifestyle prepared for her. Intellectual curiosity and spiritual questions pushed her out of middle class liberalism. She was a socialist in her youth. Despite the wealth she was born into, she tried to earn her own living by writing scenarios for Yeşilçam movies.
In the 1970s, she experienced a mental crisis and suffered from schizophrenia for years. In the 1980s, she began reading the great Sufi philosopher Ibn Arabi and underwent a kind of resurrection and became a Sufi Muslim.

Ayşe Şasa was born in 1941 in Istanbul. Her father Avni Bey was a wealthy businessman. Şasa's grandfather Bekir Bey was an Ottoman bureaucrat of Circassian origin. Her grandmother Mihriban Hanım was a religious woman from the famous Bedirhan Tribe of southeastern Turkey. Şasa's mother was also of Circassian origin. Rauf Orbay, one of the commanders of the War of Independence and a major politician after the Turkish Republic was established, was Şasa's granduncle on her mother's side.

Şasa gives many details about her family in "Bir Ruh Macerası" (A Spiritual Adventure), her memoir. According to her description, Avni Bey was a kind and caring father, while her mother was a tough and complex woman. Şasa particularly uses the English word "tough" to describe her mother's character. Avni Şasa made a fortune from the wood trade after he graduated from law school. Şasa mentions her father's conservatism in daily life and liberalism as a political and economic point of view. Like many other Caucasian emigrants, Avni Şasa was very conservative concerning such matters as family life and personal honor. However, he admired American liberalism as well.
Father and mother Şasa were a secularist couple that disdained anything belonging to the past and tradition. "For them," says Ayşe Şasa, "anything Western, contemporary or new is unexceptionally good." Father was fond of water sports and tennis. The family went to ski in the Alps in winters. They had money, and they did not think of anything other than enjoying their money.

Perhaps the most significant thing about Ayşe Şasa's childhood was that she was raised by German nannies. Beginning from the second half of the 19th century, rich families in Istanbul had their children raised by French or German nannies as a sign of Westernization.

There is a saying in Turkish, "I am more progressive than my father, and my son is more progressive than me." This shows the mentality of the silent social program of Westernization in Turkey. Şasa's parents were mundane people who had no care about any religious or traditional matters, and they expected their children to be more European, i.e. more materialistic and worldly.

Raised by German nannies, little Ayşe was detached from her own roots. She saw "Schwester Katie," the Hungarian Jewish nanny, or Barbara, "the Nazi-minded" German nanny, more than her own mother. It's interesting that Ayşe Şasa, in her memoirs, mentions her nannies by their names, while she never refers to her mother's name. Her father Avni Şasa is "Avni Bey," but her mother is just "mother." This is strange and shows how deep the detachment between mother and daughter was.

The second detachment was from domestic religion and culture. Though the Şasa family came from a religious and traditionalist background, they did not want their children to be like their ancestors. Ayşe and her brothers were raised as European kids by "frau" this or "schwester" that.

It was tragicomic that the nannies that rich Turkish families relied on for raising their children as rationalist modern individuals were generally taking the kids to Christian churches. Frau Katie indoctrinated Ayşe in the German concept of God, the "Lieber Gott." Ayşe Şasa remembered this as "complete alienation" from the faith of the Turkish people.

Alienation was the shape of Westernization in Turkey. The Şasa family was among the middle class that insulted the values of their fellow people, including social traditions, Turkish music, Turkish movies, et cetera.

In school, Ayşe was seen as a stupid girl. She could not keep up with the lessons. She was depressed and unwilling. Thus, the other kids ridiculed her and she had no friends at all. Her classmates called her "stupid Ayşe."

Fortunately, her intelligence was discovered when she took the examination for Arnavutköy American College for Girls. She took fourth place in both the school exam and the IQ test. Yet, Arnavutköy College was a boarding school, and Ayşe felt lonelier than ever in this school. She had anxiety and fears. This made her study hard, and she became a successful schoolgirl. She began to feel selfconfident for the first time in her life.

In the 1960s, Ayşe Şasa became a socialist like many other young people in Turkey. This was more an intellectual position than an active one. She read much and met socialist intellectuals, mostly writers and moviemakers.

One day, Atilla Tokatlı and Selahattin Hilav, socialist friends of Şasa, took her to the house of Kemal Tahir, the great novelist and philosopher. Tahir would become a pivot point for her in later years. When they first met, Tahir told her to choose her stand point according to the fact that Westernized intellectuals would praise her if she did ridiculous things but would disrespect her if she did a significant job.
Now, the young lady was a screenwriter for Yeşilçam cinema, which was disdained by socialist intellectuals in those years. She made new friends and began to work for film directors including Atıf Yılmaz, who she would later marry.

As a young socialist, Şasa tried to deny the wealth of her family. She worked and earned little money. She was among the wellknown moviemakers. She wrote dialogues for certain screenplays. She married Atilla Tokatlı, a poor director. The couple suffered financial problems. Ayşe wrote and tried to sell scenarios, but this was not enough and her family was behaving cruelly since they did not approve of her decisions including her marriage to a socialist movie director.

The young couple soon divorced. Şasa was now "a stranger on Yeşilçam Street." She worked for Atıf Yılmaz on the screenplay of the movie "Ah Güzel İstanbul" (O Beautiful Istanbul). They married. This was a happy but short interval for Şasa. She had a crisis and was hospitalized for a mental illness. Psychiatrists diagnosed her illness as "atypical schizophrenia." The illness made her weak, depressive and dark. She stayed in her personal darkness for nearly a decade before she re-met Islam.

Indeed, a mental illness like schizophrenia is a kind of death, and one who comes out of the darkness of a decade's illness may be seen as resurrected. When she was ill, Şasa read Ibn Arabi, a major figure in the history of the Sufi understanding of Islam. In the 1980s and 1990s, she met Muslim intellectuals including İsmet Özel, Sezai Karakoç, İsmail Kara, Mustafa Kutlu, Mahmut Erol Kılıç. She decided to become an engaged Sufi, and she entered a Sufi order in Istanbul.

She began to practice Islam and adopted the hijab, too. Though this shocked her social circle at first, she resisted by tidying up her life according to tenets of Islamic.

However, the mental illness affected her for very long. She was a lonely person. Bülent Oran, her third and last husband, was the major figure in her life. She generally talked to people via telephone. Once I called her regarding a publication matter. Her voice was so soft that you could barely hear what she said on the phone.

It's fortunate that Ayşe Şasa left several books behind, including her memoirs "Bir Ruh Macerası" (A Spiritual Adventure), a collection of essays on spiritual movies, "Yeşilçam Günlüğü" (Yeşilçam Journal), her notes and interviews on mental illness, "Delilik Ülkesinden Anılar" (Memoirs from the Land of Madness) and a fantastic novel, "Şebek Romanı" (An Ape Novel). Ayşe Şasa died of cancer on June 16, 2014.