Nuri Bilge Ceylan depicts what it is to be human 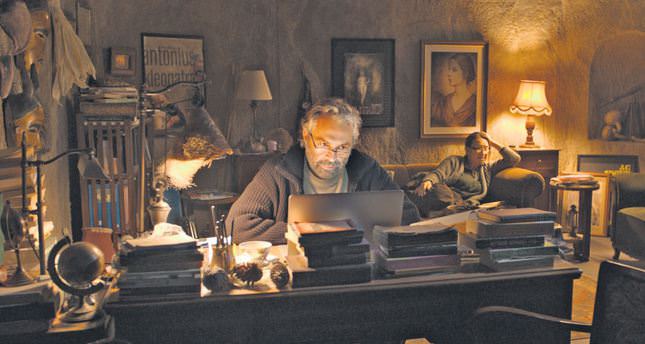 By pursuing the inspirations of humankind in most of his films, Cannes-winning director Nuri Bilge Ceylan is sending a wakeup call to the long hibernating human soul. Awarded with the Palm d'Or at the Cannes Film Festival, "Kış Uykusu" (Winter Sleep) challenges intellectual morality and arrogance. Addressed to greedy Turkish intellectuals, Ceylan is not exactly backward in coming forward

Inspired by Chekhov's short stories, the character drama was scripted by Nuri Bilge Ceylan and his photographer and wife, Ebru Ceylan. The three-hour atmospheric film revolves around the story of the wealthy retired actor Aydın running a boutique hotel lying within the spectacular landscape of Cappadocia. Out of the public's gaze, the former actor has devoted his retirement to managing the hotel, writing columns for a local newspaper and contemplating writing a book on the history of Turkish theater.

There are two women playing major's role in Aydın's life. The first, his young wife Nihal, acts like a cold fish and hardly ever speaks to him, and the other, his sister Necla, moves into his house after a failed marriage. Meanwhile, the arrival of a harsh winter and dense snowfall are getting on Aydın's nerves while Necla persistently asks him to leave this remote mountain region.

As usual, the acclaimed director does not introduce an unknown issue to cinema devotees. Similar to his early films such as "Koza" (Cocoon), "Kasaba" (The Small Town) and "Mayıs Sıkıntısı" (Clouds of May), Ceylan's Winter Sleep unfolds how authority is shaped by power and hierarchy.

Aydın, as the protagonist of Winter Sleep, is a Turkish intellectual who appears as if he was a successful actor. "I was on stage in the theater for 25 years," says Aydın, although he does not believe in what he says. Neither his skills, nor his knowledge enable such a grumpy hotelier to do anything properly.

He talks through his hat to the locals' attitudes of at every opportunity. Fed up with his daily routine, he falls into an agitated and stressful funk, not even showing any feelings for his beautiful wife Nihal while she attempts to escape her suffocated life by sponsoring a charity.
His sister Necla is the second person who pushes Aydın's limits. She harshly criticizes her brother's intellectual knowledge while they talk in his study - ironic since she has none of her own. His sharp-tongued sister then starts a discussion of real Turkish intellectuals, to which she does not consider her bad-tempered brother to belong. From this perspective, Ceylan displays his courage to criticize his own intellectual identity, which conversely deserves to be honored.

Although the film centers on the three main characters, Ceylan successfully touches upon other points. The hate felt and expressed by society's lower classes comprises another important facet of the story. To illustrate, the action starts with a boy, İlyas throwing a stone at Aydın's car. Aydın is İlyas' father's (İsmail) landlord and İsmail, who is broke, has been struggling to pay the rent for months. His family is going through hard times because Aydın continuously knocks on their door demanding the rent . İlyas is determined to take his father's revenge. The conflict between İsmail's brother İmam Hamdi and Aydın is also worth mentioning.

These scenes successfully draw attention to how power is turned into authority. No matter how furious İmam Hamdi is with Aydın, he says, "You are powerful." İmam Hamdi is a loser, but a character-wise man who stands against power. He never asks Aydın's for help, always saying, "We will pay your debts. Please be patient," which deeply endears the audience to İmam Hamdi and resonates his sorrow and despair.

İmam Hamdi's character is brought to life by Mahmut Fazıl Çoşkun, who previously played a religious cleric in the film "Uzak İhtimal" (Wrong Rosary) which he also directed. After a long hiatus from religious roles, Çoşkun returns to a clerical role. İmam Hamdi's meager salary is his families sole source of income. He at once neither wholly engages in religious affairs, nor does he contradict them. As a modest person, he lives in his own world. When he goes to Aydın's house to apologize for İlyas breaking the truck window, he is not kindly welcomed - he is offered women's slippers with the excuse that there are no men's slippers available. He puts them on nonetheless, however reluctantly. This scene goes beyond the limitations of the film. One of the other most interesting scenes of the movie features Nihal taking a large amount of money to İmam Hamdi. Despite such sharp points, Ceylan is good at representing the loser portrait of rural regions through İmam Hamdi. Two other striking characters are Aydın's friends Süavi and the teacher, Levent. They go hunting and then return home for an overindulgence of wine and conversation to forget their troublesome rural lives . One of the unforgettable scenes is the discussion on Shakespeare's lines between Aydın and Levent at Süavi's house.

Also, Nihal's farewell with Aydın before she leaves him and Necla's criticisms are so well performed that they are definitely engraved in the audience's mind. Ceylan's plain and steady interpretation is always accompanied with catchy images. He has received certain criticisms that the photographic value of his films surpasses cinematography. His previous films feature scenes with fewer dialogs than "Winter Sleep," but with just as rich of a visual pallette. Ceylan surprises his audience and demonstrates that he is able to leave his signature style behind and incorporate long spectacular dialogues. Bear in mind though that he never forgets visual aesthetics in his films either. Winter Sleep is Ceylan's first work where the dialogues balance with the visuals. Cinematographer Gökhan Tiryaki acts like a visual wizard with his accomplished indoor and outdoor scenes of Cappadocia. What a fascinating skill!

Above all, "Winter Sleep" gathers firstclass performers together as Haluk Bilginer (Aydın), Melisa Sözen (Nihal) and Demet Akbağ (Necla) give performances deserving of a standing ovation. You cannot take your eyes off Haluk Bilginer. Ayber Pekcan, Tamer Levent and Nadir Sarıbacak accompany the senior protagonists with their professional performances. Providing a taste reminiscent of classical novels, "Winter Sleep" displays the intricacies of rural life and the impact of urban life on humanity in a realistic way. Nuri Bilge Ceylan continues his depictions of sorrowful and hopeless souls in his most recent work. Do not miss this film if you wish to witness the depths of the
human soul on the silver screen.
Last Update: Jun 21, 2014 1:27 am
RELATED TOPICS