Student victims of Feb 28 to be subject of documentary 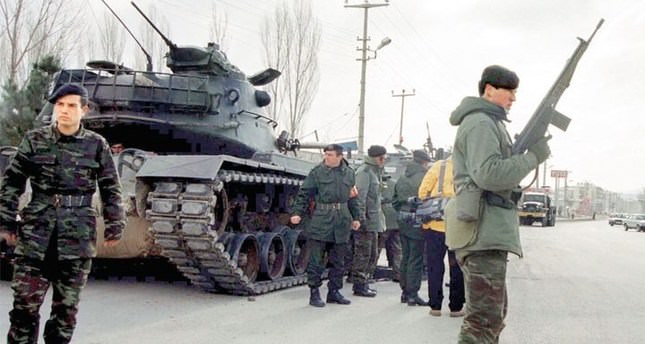 by Daily Sabah Jul 19, 2014 12:00 am
High school students who suddenly faced the full wrath of the state after the Feb. 28, 1997 'post-modern coup' speak out about the obstacles they encountered while trying to further their education in a 13-part documentary.

The experiences of students from vocational high schools after the Feb. 28 coup have become the subject of a 13 episode documentary. After the coup, tens of thousands of students were prevented from continuing their education in other departments of universities.

Many students from commercial, health, justice, radio-television and building design vocational high schools were subjected to a different scoring system than other students in university entrance exams after a 1997 decision. Most of these students had to choose only the programs related to their vocational schools or went abroad for their education even though they were very successful in the university entrance exam.

Despite common public knowledge, not only the students from imam hatip (religious vocational schools) high schools but students from architecture, engineering, medical, nursing, directing, law or technical departments in vocational schools were also victimized as a result of the Feb. 28 coup. The documentary will be supported by interviews with the educators at that time, psychologists, bureaucrats and journalists. Written by Umut Mete Soydan, the documentary is directed by Can Emre, whose short film of was screened at the Cannes Film Festival.

Filming of the documentary commenced in the previous days and it is projected to premier in September 2014. Each episode is planned to be 30
minutes.
RELATED TOPICS