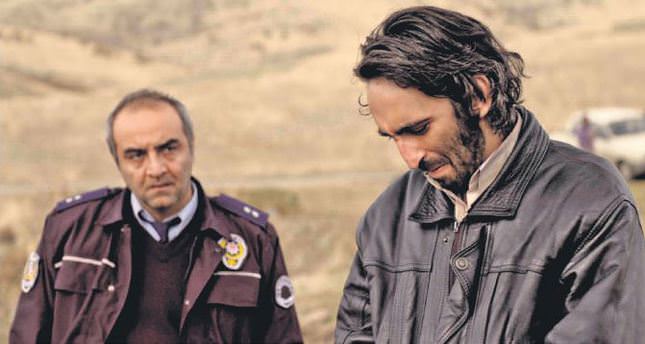 by Özkan Binol Aug 09, 2014 12:00 am
The world of cinema, which extends its dimensions with literature, painting, music and photography, continues to bring new meanings, awareness and beauty beyond our experience. Cinema opens new horizons as "the Seventh Art," a term coined by Italian film theoretician, Ricciotto Canudo, with its exceptional visual language and creativity among directors.

Celebrating its 100th year, Turkish cinema enjoys increasing global reputation with consecutive accomplishments, and is gradually coming to the forefront with its intellectual identity. What's more, three Turkish films will be introduced to French moviegoers in Paris, Europe's most fashionable city. These include Nuri Bilge Ceylan's Cannes Palme d'Or winner "Kış Uykusu" (Winter Sleep), Yeşim Ustaoğlu's "Araf " (Somewhere in-between) and Tayfun Pirselimoğlu's "Ben O Değilim" (I Am Not Him). One of the respected Turkish amateur directors, award-winner Nuri Bilge Ceylan, turns his back on mainstream culture.

His plain narration, poetic style and realistic depictions are what distinguish him from other filmmakers. Ceylan's stories are accompanied with extraordinary visual images. In a manner of speaking, he says "speech is silver, but silence is gold." He does not use or even need many words. Ceylan's first attempt in the movie world was a short film called "Koza" (Cocoon) back in 1995 that was apparently influenced by Tarkovski's cinema. His second film "Kasaba" (The Small Town) released in 1998 is the film where he stepped into the world of filmmaking. Ceylan became a worldwide name with "Mayıs Sıkıntısı" (Clouds of May).

These three films depict the relationship between nature and people. He marked his peak with "Uzak" (Distant) in 2002, which tells the tragic story of two people who have become strangers to one another in Istanbul as the antagonists of the film do not feel they belong to the city. Ceylan attracts moviegoers with fascinating views from Istanbul.

His next film "İklimler" (Climates), which features Ceylan's wife, Ebru Ceylan, and the director himself, tells the story of a couple lost in their daily lives. He won an award for "Best Director" at the Cannes International Film Festival with his film, "Üç Maymun" (Three Monkeys) in which small human weaknesses create big lies that break apart a family. Ceylan set off on a journey with "Bir Zamanlar Anadolu'da" (Once Upon a Time in Anatolia). The plot is again set in the country where there is conflict, but this time it involves a murder. The district bureaucrats and suspects search for a corpse throughout the night. However, in reality, they are looking for answers to their soulwrenching tragedies. With his latest film "Winter Sleep," he displays a veteran theater actor Aydın's struggling relationship with himself, his dreams, home and loved ones in a deserted region nestled in Anatolia's moorland. He puts his stamp on history with Winter Sleep, awarded with the Palme d'Or at the Cannes Film Festival.

He is the second director that brought the award back to Turkey, 32 years after Yılmaz Güney's "Yol" (The Road). Recently, Turkey submitted it for potential nomination in the Oscars' best foreign language film category. In the past, "Three Monkeys" was Turkey's official submission for Best Foreign Language Film at the 81st Academy Awards which was short-listed, but not nominated. Ceylan is heading for the red carpet for the second time.

Similar to him, Yeşim Ustaoğlu is a leading respected director. She generally presents taboo and rarely-mentioned subjects in her films. Ustaoğlu creates a simple but impressive atmosphere by introducing a successful connection between antagonists' psychological diversity and their social environment. Her first full-length feature "İz" (The Trace) has an abstract atmosphere.

What makes it influential is addressing violence, one of the current themes continuously discussed across Turkey. She impresses with her cinematic language that was rather new in Turkish cinema at that time. The flourishing director criticizes Turkey's previous ideological perspective toward the Kurdish issue and minorities in "Güneşe Yolculuk" (Journey to the Sun) featuring the friendship of a young Turk and a Kurd. The film received critical acclaim at international film festivals.

With "Bulutları Beklerken" (Waiting for the Clouds), Ustaoğlu turned her camera to minorities. The plot features the journey of a Greek woman who was adopted by a Turkish family at the time of population exchange between Greeks and Turks, and never spoke of her ethic identity again. The story attracts attention not with its political discourse, but humanitarian aspects and plain language. Ustaoğlu's next big success was "Pandora'nın Kutusu" (Pandora's Box).

She addresses consumer society, the transition to modern life, conflicts between traditional and modern society structures and the lack of communication. Finally, "Somewhere In-Between" mirrors rural life with locals stuck in small towns. The drama features a young rural girl who tries to escape her suffocating life. Her story opens a new door for people between life and love, but the secret affair ends in deep sorrow. She makes a social analysis using transparent language. Somewhere In-Between is presumably the one surrounded with realistic feelings among Ustaoğlu's films. Although young actress Neslihan Atagül was the lead, arabesque singer Özcan Deniz makes a surprise appearance. Screenwriter and director Tayfun Pirselimoğlu released his first full-length film "Hiçbir yerde" (In Nowhere Land) back in 2002. The drama tells the story of a woman whose son was lost due to political reasons. His first work won the Special Grand Prize of the Jury at the 26th Montreal World Film Festival. Lead actress Zuhal Olcay was highly appreciated for her outstanding performance.

After a five-year break, Pirselimoğlu directed the trilogy of "Rıza," "Pus" (Haze) and "Saç" (Hair) focused on conscience and death. The three films depict poor people and losers from a pessimist perspective. He shows the silhouette of Istanbul, that is, people who are invisible even though they are living among us and struggling with death and conscience. Pirselimoğlu's trilogy shares certain features.

First, the plots are set in Istanbul. More importantly, the antagonists are those unable to fit-in with normal life, and remain in the shadows of Istanbul. Third, they are all ordinary people. On the other hand, the films differentiate between each other with distinct features. While "Rıza" mirrors a truck driver who stays in Istanbul for some time, but is unable to return, "Haze" features a little child who lives in a ghetto, and can only see the modern city over a highway, while "Hair" is set in Beyoğlu's Tarlabaşı neighborhood.

Additionally, "I Am Not Him," which was first screened in France, shows a man trying to change his identity. Nihat is a middle-aged man working in the dining hall of a hospital. He does not know how to respond to Ayşe's affection toward him when she begins working there. He accepts her invitation to spend time together, and goes to her home where many surprising occurrences await him that changes his entire life. Pirselimoğlu says, "The subjects of 'being someone else' and 'another one' always drew my attention, and enters into my works. 'I Am Not Him' focuses on this subject. It has a structure paving way to different [places] if you read further into it." We are now familiar with Ceylan's increasing success, but words cannot express our pride in seeing three Turkish films in French cinemas. I can only wish for more directors and films to enrich Turkish cinema with new paths.
Last Update: Aug 09, 2014 1:54 am
RELATED TOPICS