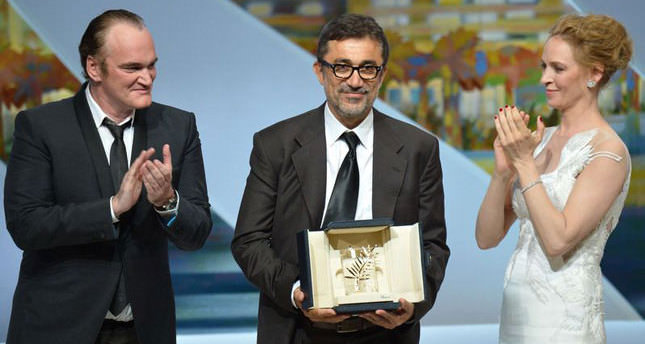 Nuri Bilge Ceylan says winning the Palme d'Or hasn't changed much in his life apart from Quentin Tarantino's remark, "Welcome to the club," that seemed like a sign of things to come

Nuri Bilge Ceylan says Quentin Tarantino said "Welcome to the club" to him during the family photo shoot in Cannes. The Palm D'or winner "Winter Sleep" came out in France, the host country of Cannes Film Festival, on Aug. 9. In his interview with French newspapers, Nuri Bilge Ceylan said the Palm D'or has not yet changed his life.

Ceylan, who had made the premier of his short film "Koza" (Cacoon) at the Cannes Film Festival earlier, gave statements to the most prestigious newspapers of France due to the screening of his film. "Winter Sleep" is the longest film to win the highest prize, clocking in at three hours and 20 minutes.

The well-known director of Turkish cinema gave a full-page interview to "Liberation" where he talked about the effects of winning the award on his career and life.

Ceylan said, "Maybe, my next film will rise rapidly. But for now, there have been no changes in my life. Of course, the film will be released in many other places and this will help me to be recognized by many more people. The first sentence I heard during the family photo shoot after the award ceremony was from Quentin Tarantino. "Welcome to the club!" When I was granted Palm D'or for the first time, the chairman of the festival told me
the same thing."
Last Update: Aug 12, 2014 10:10 am
RELATED TOPICS