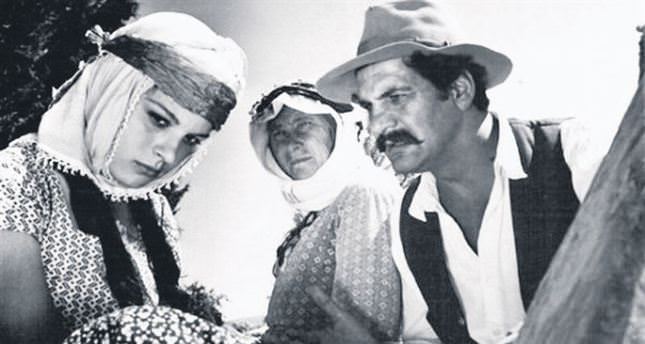 by AA Sep 02, 2014 12:00 am
Celebrating the 100th year of Turkish cinema, Turkey's Tourism Ministry kicked off a project back in June to determine the best 100 Turkish films released between 1923 and 2013. The ministry launched an Internet vote to decide among 300 films.

More than 100 universities and NGOs participated to the competition with a total of 360 votes. According to the final results, Metin Erkan's black-andwhite drama "Susuz Yaz" (Dry Summer) ranked first on the list. Turkey's Culture and Tourism Minister Ömer Çelik shared the competition results with an Anadolu Agency reporter. He said the competition was one of the most comprehensive projects in the history of Turkish cinema. Among the top 10 films, "Dry Summer" ranked first with 22,582 votes followed by "Hababam Sınıfı" (The Chaos Class) with more than 19,000 votes, "Babam ve Oğlum" (My Father and My Son) with over 12,000 votes and "Eşkıya" ranked fourth (The Bandit) with almost 2,000 votes, which was also Çelik's favorite. Additionally, "Canım Kardeşim" (My Dear Brother), "Selvi Boylum Al Yazmalım" (The Girl with the Red Scarf), "Züğürt Ağa," (Züğürt Agha) "Yol" (Road), "Vizontele" and "Bir Zamanlar Anadolu'da" (Once Upon a Time in Anatolia) were the other films listed in the top 10.

The highest-ranked Turkish films do not belong to a specific category or period, suggesting that Turkish moviegoers watch a wide range of films. Çelik reminded that "Road" and "Once Upon A Time in Anatolia" were awarded at the Cannes Film Festival in previous decades. "The top 10 list suggests the choices of Turkish viewers are in high standards.There is a relation between the Cannes-winning films and the list," Çelik said.

He also extended his happiness for the success of "My Father and My Son" supported by the ministry. "We should take more responsibility to promote Turkish films. This year, the ministry doubled the funds for Turkish cinema. Although we reached 42 million viewers in previous years, the number reached 50 million in 2013," he continued.

This year, the ministry officials presented a total of 10,000 special Turkish movie packs to the participants of Cannes Film Festival coming from 180 countries. "If the producers of the best 10 films submit their copyright to the ministry, we will introduce them as a movie pack, and send across the country and different places around the world," Çelik said.

The available movie packs were prepared in English, Arabic, Russian and Chinese to promote Turkish cinema in every corner of the world.
The ministry is also continuing other similar projects to mark the 100th year of Turkish cinema.

Different production companies from China to Latin America submitted their applications to the ministry for collaboration with Turkey. This year, the number of moviegoers is expected to surpass 50 million. The viewers of local productions will also reach between 60 to 65 percent. Çelik stated that Turkish cinema is rising while drawing more attention in world cinema.

In addition, the preparations to establish a National Film Archive and Cinema Museum are in progress. "We should not consider it as a repository about Turkish cinema, but Turkey's national history,"Çelik concluded.