Preparations for the Golden Orange Festival at full speed 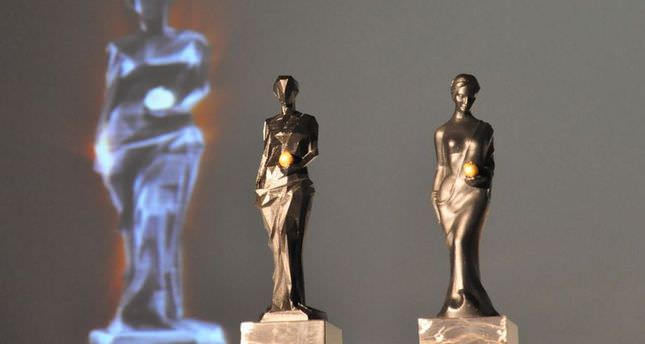 by AA Sep 10, 2014 12:00 am
The films nominated for the best international feature-length film award at the 51st International Golden Orange Film Festival were announced this week. The festival committee stated that 10 feature-length films were chosen for the event, which will take place with the theme of "From Tradition to the Future" from Oct. 10-18 in Antalya. The nominated films are listed as follows: Indian director Chaitanya Tamhane's "Court," awarded with the Lion of the Future at the 71st Venice Film Festival; Serbian director Darko Lungulov's "Monument to Michael Jackson," which competed for the East of West award at the Karlovy Vary International Film Festival; Hungarian director Kornel Mundruczo's "White God," awarded the Un Certain Regard prize at Cannes; Russian director Alexandr Kott's "Test," which was presented at the Grand Prix, the prize for best cinematography and the Elephant trophy from the Guild of Film Critics and Scholars at the Kinotavr Open Russian Film Festival held in Sochi; French director Marienne Tardieu's "Insecure;" Swedish director Ruben Ostlund's "Force Majeure;"Sudabeh Mortezai's "Macondo;" Palestinian director Suha Arraf's first feature-length film "Villa Touma;" Flourishing Chinese director Xin Yukun's first film "Binguan" and Polish director Maciej Pieprzyca's "Life Feels Good."

The films and actors nominated to the festival's "national feature-length" category will be granted TL 640,000 ($290,218) in total. The producer who produces the best chosen film will also be awarded TL 350,000. The "Best Director" will receive a TL 75,000 prize while the "Best Debut Film" will be given TL 125,000. Those who win "Best Scenario," "Best Director of Photography" and "Best Music" will be awarded the Golden Orange statue with a TL 30,000 cash prize.

The award, which will be presented at the 51st International Antalya Golden Orange Film Festival, was re-designed based on the award that was granted to Halit Refig for his film "Gurbet Kusları" in 1964. Halit Refig was the first director who won the Golden Orange.

Antalya Metropolitan Municipality Mayor Menderes Türel, in his speech at the press conference, said they are working to strengthen the festival both locally and internationally. He said this year's festival will not take place on a local scale, adding, "The International Antalya Golden Orange Film Festival should be able to compete with its foreign opponents and represent both Antalya and Turkey on the international stage." He stated Anatolian tradition and heritage manifest themselves in every art form, and noted recently that Turkish filmmakers shoot poetic films. "Yılmaz Erdogan shot 'Kelebegin Rüyası' (The Butterfly's Dream) like a poem and introduced it to the audience. Nuri Bilge Ceylan's 'Kıs Uykusu' (Winter Sleep) combined literature, painting and theater," said Türel. He stated that Anatolian heritage has started to blossom in Turkish cinema, which is marking its 100th anniversary. He also added that filmmakers who dedicated their lives to Turkish cinema have a role in recent achievements of Turkish films. "We want the award to have traces of modern cinema as well as the Turkish cinema tradition," Türel concluded.

The director of the festival, Elif Dagdeviren, on the other hand, stated that they have been working on this year's festival for two months and emphasized the importance of the festival's theme "From Tradition to Future." "The Antalya Golden Orange Film Festival claims the traditions and the future of these lands," said Dagdeviren before adding the weakest part of the festival is its archives.

She noted that they had the festival website redesigned to ensure that the event is talked about all year round rather than it being a matter of discussion for 25 days only. She said they gave the festival's social media accounts a make-over. "We hope that everything will be ready for the next year," Dagdeviren noted. She said the awards presented at other film festivals have not changed unlike the Golden Orange award. "We tracked the first award to use it as a model for this year's award," Dagdeviren said, and stated that they found it in Halit and Gülper Refig's house.
She continued, "I called Mrs. Refig and she invited me to breakfast. I asked to borrow the award and she gave it to me as she trusts me."
Erol Sagmanlı, the owner of the company responsible of designing the statuette, said they remodeled the award, a statuette of Venus, which has become a symbol of Antalya, remaining true to the original. "We added a modern touch to the original statuette," said Sagmanlı. Gülper Refig said Turkish cinema is inspired by Anatolian sagas and stories. She emphasized the unique features of the Turkish film industry, adding, "Our film industry has no intellectual background or the necessary capital but it has a heart.

People are working with love and self-sacrifice." She noted that Turkish films touch people's hearts and that is why they are unforgettable. She said the festival committee forced Halit Refig to take the award in 1964 since her husband was an anarchist at heart, noting, "Yet, this award meant so much to him just like it means so much to me." She also said Turkish cinema is sincere, melancholic and holds something beyond love. The jury president of the festival's National Featurelength Film category, Yılmaz Erdogan, stated that a person cannot forget his or her first encounter with cinema, and spoke of his cinema hall experiences in Hakkari. "There was a tape that was played half an hour before every film session. When the tape started to play, we knew that the film would start in half an hour. First, a couple of Orhan Gencebay songs were played and some folk songs followed them. It was hard for us to enter the cinema hall since there was a man who was in charge of the tickets and a security man who carried a stick. We were mostly beaten before being able to finally watch the film. So, when people talk about cinema, these memories flash before my eyes at the sight of red carpets and flashing lights." He said cinema is in its purist form in small cities like Antalya, and added that the Antalya Golden Orange Film Festival is the festival of children. He said that the Antalya film festival should also draw people to cinema halls. "This festival is open to everyone. We will try our best not to make too many people angry. I have been angry at juries before," Erdogan concluded. Ministry of Culture and Tourism Senior Advisers Abdurrahman Çelik, Sevin Okyay, Bülent Emin Yarar, Meral Çetinkaya, Ebru Ceylan, Yusuf Sezgin and other people from the film industry attended the press conference held at SALT Galata.