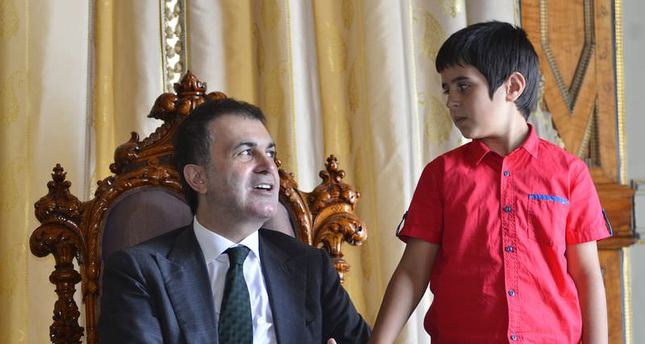 by AA Sep 12, 2014 12:00 am
Eleven-year old Turkish actor Dogan Izci, lead actor in "Sivas" directed by Kaan Müjdeci, won the Premio Bisato d'Oro Best Actor Award at the 71st Venice Film Festival last week. Müjdeci will present Izci his award at his home in Yozgat's Yerköy district today because the 11-year-old actor was unable to attend the award ceremony due to his visa's time limit, causing him to return early to Turkey. Müjdeci took the award on behalf of Izci at the ceremony held on Sept. 5 in Lido di Venezia. Although it was unfortunate that he had to return home without the award, the little actor said he was happy to walk along the red carpet and visit Italy. Müjdeci reportedly discovered Izci's artistic talents when he was at school. Each year, the Venice Film Festival presents awards to the films addressing issues related to humanity. Fifteen international film critics give the Premio Bisato d'Oro prize to promising actors. The festival jury stated that Turkish cinema fortuitously discovered a great talent in its 100th year. Izci's performance was highly applauded for its intense and natural character, and he was able to transfer his feelings to audience in a professional manner.

Turkey's Minister of Culture and Tourism Ömer Çelik congratulated the cast of "Sivas," awarded with the Special Jury Prize at the festival.
The ministry stated that Turkey is enjoying another international success after Nuri Bilge Ceylan's success at Cannes. Çelik sent a message through his official Twitter account that stated, "Marking its 100th year, Turkish cinema achieves great success. Turkey received another international award following a Palm d'Or prize at Cannes." Supported by the ministry, Turkish director Kaan Müjdeci's first feature-length film was awarded at the Venice Film Festival as well. "I sincerely congratulate Müjdeci, his team, and I hope their success will be a model for young film professionals. I also congratulate Izci for his great success. Turkish cinema is in safe hands and is entrusted to Turkish youth," he stated.