Curtains to reopen soon at state theaters with new plays 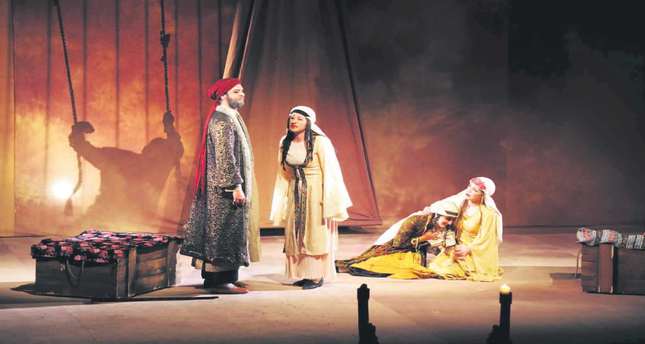 Established 65 years ago, Turkish State Theaters will welcome the new season on Oct. 1 with plays that will, mostly, be performed for the first time this year

Turkish State Theaters (DT) will open its curtains with an aim to reach 2 million people by the end of the season, and will draw audiences from every age to theater halls with Turkish and foreign plays by Tarık Buğra, Reşat Nuri Güntekin, Moliere, Arthur Miller and others. In his statement to an Anadolu Agency (AA) reporter, State Theaters General Manager Mustafa Kurt said they are ready to introduce their new season to the audience.

Kurt said that the 151 plays staged by DT last season drew 1,845,000 people to the theater halls, adding, the number increased by 60,000 people compared to 2012. He said that 70 percent of the plays staged last year were Turkish productions, and that they ended the last season with great success thanks to Culture and Tourism Minister Ömer Çelik and his support. He further emphasized that they will give priority to Turkish plays again this season. Kurt noted that DT's new season repertoire features both plays that have never been staged before and plays that have not been staged for a long time.

The new play, "Neşe, Dert, Aşk" (Joy, Trouble, Love) will focus on the life of Turkish folk music singer and songwriter Neşet Ertaş, and will be staged by Umut Toprak at Ankara State Theaters. The production will be introduced to the audience in the first half of the new season. Kurt highlighted the importance of "Neşe, Dert, Aşk" and said they were very careful when casting. "Everybody likes Neşet Ertaş. That is why we want to stage our play around Turkey. We want to share our great folk singer with everyone," Kurt said. The general manager noted, "We will do everything to honor Ertaş," and added, the play will also feature Ertaş's ballads and folk songs.

Foreign productions including "The Imaginary Invalid" by Moliere, "Shakespeare in Trouble" by Hille Darjes and Chris Alexander, "Creditors" by August Strindberg, "Hedda Gabler" by Henrik Ibsen, "Death of a Salesman" by Arthur Miller, "Dress Rehearsal for a Suicide" by Dusan Kovacevic, "Roulette" by Kosta Korditis, "Pinocchio" by Carlo Collodi, "The Great Gatsby" by F. Scott Fitzgerald and "The Women Lost the War Too" by Curzio Malaparte will also be staged across Turkey. Moreover, Tarık Buğra's "Osmancık" (Little Osman) will be staged and performed as a big production in the second half of the season. State Theaters will perform in 23 regions and on 58 stages around Turkey.
Last Update: Sep 16, 2014 12:28 pm
RELATED TOPICS