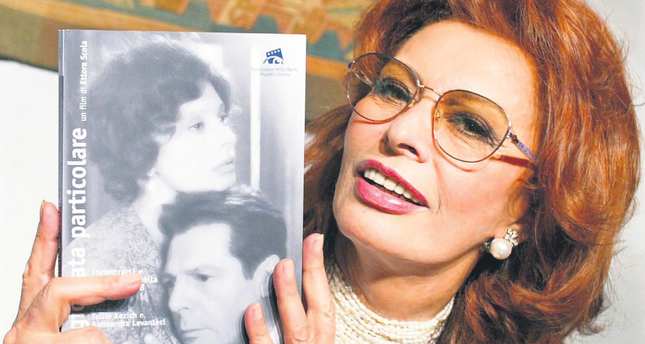 Sophia Loren, Italy's national cinema icon and eternal diva, turns 80 this week, and is marking the milestone with a book of memoirs revealing details of her rags-to-riches life

For the 300-page "Yesterday, Today and Tomorrow - My Life," Loren went into what she called her "trunk of memories" to fish out old pictures, letters and notes from the likes of Cary Grant, Frank Sinatra, Audrey Hepburn and Richard Burton, not to mention Italian soul mate Marcello Mastroianni. The result includes plenty of juicy tales, such as how she stopped Marlon Brando's physical advances with a fulminating glare and how Grant suggested they should pray to make the right decision when they were falling in love on a film set.

The book reads like a who's who of world cinema in the past 60 years as it chronicles the life of an illegitimate southern Italian street urchin who became one of the world's most glamorous film stars. Its title comes from the 1963 three-part comedy anthology directed by cinema great Vittorio De Sica in which she played three different roles. The "tomorrow" part appears to be her way of saying her career is not over. Her last film - an adaption of Jean Cocteau's "The Human Voice" - was released this year.

Each time Loren marks a major milestone it is almost a national event, in part a bittersweet reminder that the boom times she epitomised at the height of her fame are gone. One television channel has been running only Loren films all week as a tribute to the woman who won two Oscars, first in 1961 for her tragic portrayal of a war-time mother in De Sica's neo-realistic classic "La Ciociara" (Two Women). Photo exhibitions and roundtables are being held about the extraordinary rise to planetary stardom of a poor teenager discovered by a film producer who later married her and made her what one critic called Italy's greatest export after pasta.

But, as the book shows, behind the mesmerising olive green eyes and silken cappuccino skin of her youth was a will of steel and an exceptional talent. Such has been her unfading allure that one Roman Catholic cardinal quipped several years ago that while cloning was ethically wrong, an exception might be made for Loren.


FROM 'TOOTHPICK' TO DIVA

The book starts with Loren preparing a recent Christmas dinner for her two sons and four grandchildren in her house in Switzerland. She retires to her bedroom to open the "trunk of secrets", and begins telling her amazing story. Sofia Scicolone (she later changed the spelling of her first name to 'ph' and took the stage name Loren) was born in Rome on Sept. 20, 1934, the daughter of a frustrated actress whose lover had refused to marry her. She grew up in Pozzuoli, a poor town near Naples, and remembered begging for food from U.S. soldiers during World War Two. She was so thin her nickname was stuzzicadenti (toothpick).

Her mother took her to Rome, where she earned a small income for both of them by modelling for pulp magazines and winning prizes in beauty contests. At one contest in the early 1950s she was spotted by Carlo Ponti, who secured her first roles and was for the rest of his life the chief architect of her career. She and Ponti, who died in 2007 at the age of 94, were married for five decades.

In the book she describes her relations with several leading men and reveals how she cut off an advance by Brando when they were filming 1967's "A Countess from Hong Kong". "All of a sudden he put his hands on me. I turned in all tranquillity and blew his face, like a cat stroked the wrong way and said, 'Don't you ever dare to do that again. Never again!'," she writes. "As I pulverised him with my eyes he seemed small, defenceless, almost a victim of his own notoriety. He never did it again but it was very difficult working with him after that." Grant was a different story. The two became infatuated in 1956 when she was only 22 and already romantically linked to her future husband Ponti. Grant was 52 and on his third marriage.

He asked her to marry him while they were filming "The Pride and the Passion," and the book includes photographs of his love notes. One says: "Forgive me, dear girl. I press you too much. Pray - and so will I - until next week. Goodbye Sophia. Cary".

Prayer was a word that appeared repeatedly in notes from Grant, who died in 1986. Another reads: "You'll be in my prayers. If you think and pray with me, for the same thing and purpose, all will be right and life will be good". She also describes the 17 days she spent in jail in Italy in 1982 as part of a plea bargain over a failure to file an income tax return. At the time she blamed her accountant. The book is published by Rizzoli in Italy and is due to be published in English in the United States in December by Atria Books, a division of Simon and Schuster.