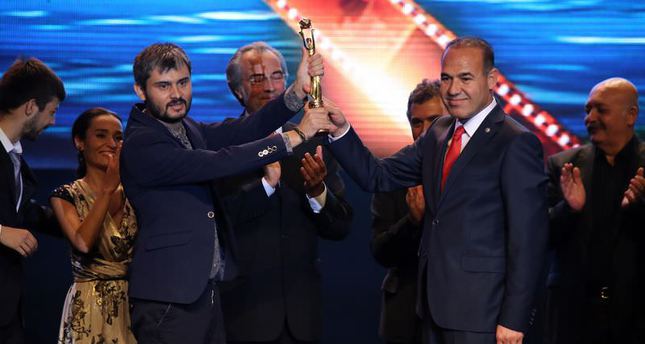 The winners of the National Feature Length Films category of the 21st edition of the International Golden Boll Film Festival have been announced. The Best Film Award was given to Nesimi Yetik's 'Toz Ruhu'

Organized by the Adana Metropolitan Municipality, the 21st International Golden Boll Film Festival took place at Çukurova University Congress Center. Nida Karabol, director of photography Gökhan Tiryaki, director Mahmut Fazıl Coskun, musician Tamer Çıray and actors Ahu Türkpençe and Ayberk Pekcan performed jury duty under the presidency of director Reha Erdem. The event, which was hosted by Sebnem Dönmez and Mehmet Aslan, kicked off with a parade of famous stars on the red carpet. The ceremony continued with the announcements of the winners of the National Student Films Competition and the Mediterranean Countries Short Films Competition.

Yetik's "Spirit of Dust," which won the Best Film award, also received Best Actor and Best Art Director awards. The Golden Boll for Best Director, Best Actress, Best Actor, Best Music, Best Director of Photography and Best Editing went to "Deniz Seviyesi" (Things I Cannot Tell). Directed by Onur Aydın, "Silsile" (Sequence) received Best Supporting Actress, Best Supporting Actor and Promising Actor awards. The Adana Audience Award was given to Gülay Kuris, the producer of "Yagmur: Kıyamet Çiçegi" (Rain: the Flower of Doomsday) by Adana Governor Mustafa Büyük and Culture and Tourism Deputy Minister Abdurrahman Arıcı. Governor Büyük thanked Turkish cinema and the people who worked hard for the festival while presenting the award. Arıcı passed on Culture and Tourism Minister Ömer Çelik's love and greetings. He said they would continue to support cinema and young talents, adding, "We spent TL 149,156,813 for Turkish cinema between 2005 and 2014." He stated that their contribution would continue as long as young people are devoted to cinema.

Adana Metropolitan Municipality Mayor Hüseyin Sözlü and actor Yılmaz Güney's brother Yasar Pütün gave the Yılmaz Güney award to Murat Düzgünoglu for his film "Neden Tarkovski Olamıyorum" (Why Can't I be Tarkovsky). Düzgünoglu said although shooting a film is a tough process; that is not the case for him, as he was very happy during the period in which he shot the film.

Sözlü, during his speech after receiving the award, claimed that they are hosting a traditional, long-established festival. "This festival is not just the festival of Adana," he stated before adding, it is the festival of Turkish art and cinema. He said the International Golden Boll Film Festival is one of the two most important festivals in Turkey. Güney's brother Pütün expressed his sadness since the Ugly King of Turkish Cinema, Yılmaz Güney, was not among them that night. He said he is not happy with people who subject Yılmaz Güney to political controversy. "Güney said that he was the artist of the nation. It does not matter if it is Germans, Japanese or French. Being an artist of a nation is to stand for the oppressed and the wronged. That is why Yılmaz Güney still lives in the heart of the nation," Pütün noted.

Director Yetik, who also took his award from Sözlü said they shot "Spirit of Dust" in tough conditions. He dedicated his award to his friend Selman Karaca who committed suicide at the age of 25. Cüneyt Arkın went up to the stage to present the Best Actress awards to Damla Sönmez (Things I cannot Tell) and Deniz Özdogan (The Fish in Me). He gave the award to producer Banu Alagöz instead of Özdogan who was unable to attend the award ceremony. Sönmez was very emotional on stage and thanked the organizers. During the event, the award for Best Director was shared by "Things I cannot Tell" directors Nisan Dag and Esra Saydam. Dag expressed her surprise at winning the award, saying they competed against important directors in the competition. Saydam noted that shooting the film was a long journey.

On the other hand, a group of artists including Esref Kolçak, Mahmut Cevher, Hikmet Tasdemir and Yılmaz Köksal left the hall before the ceremony on account because they did not like the seats reserved for them by the organization.