A century-old love for Turkish cinema 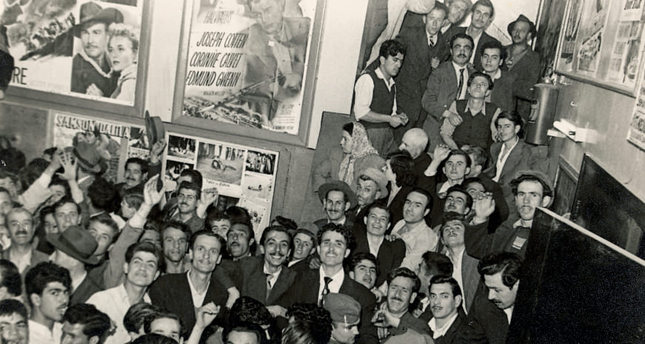 Istanbul Modern celebrates its 10th year with the special exhibition “Yüzyıllık Aşk: Türkiye’de Sinema ve Seyirci İlişkisi” (A Century-Old Love: The Affair Between Film and Audience in Turkey) honoring the centennial of Turkish cinema until Jan. 4, 2015

Sponsored by Turkey's Culture and Tourism Ministry, the exhibition "A Century-Old Love" is supported by the Istanbul Development Agency as part of the 2014 Financial Support Program for Non-Profit Institutions in Istanbul as a Global Tourism Center. Taking the floor during the opening ceremony, Istanbul Modern Chairwoman Oya Eczacıbaşı expressed her happiness to be hosting such a beautiful event. The art center has been organizing cinema-related events for the last 10 years. "The exhibition mirrors film culture and the love for cinema from the eyes of viewers and makes the history of Turkish cinema visible following through research on written and visual archives," she said.

As part of the project, five Turkish directors presented short films about cinema in Turkey, which are planned to be introduced at international film festivals and museums. Concurrently held with the exhibition is an exclusive program titled "İstanbul'un Orta Yeri Sinema" (Cinema at the Center of Istanbul) in which a number of films depict the different periods of the city.

Compiling written and visual representations of films, the exhibition shows the most concrete relation between cinema and its audience in the last hundred years. "Cinema is one of the most powerful visual fields that influence people and identity. In a broader sense, we will be exploring Turkish history," said Istanbul Modern manager Levent Çalıkoğlu. He said the exhibition is a reference source for all. "You will find something about your life. The event introduces the most important steps taken in Yeşilçam and modern Turkish cinema," he emphasized.

Additionally, the exhibition curator, Gökhan Akçura, highlighted the last century's innovations such as computers, smartphones and TVs, which take up a significant part in daily life. "However, none of them are as influential as cinema," he said.

The history of cinema has its roots in the 19th century when motion pictures were introduced without sound. Film viewers used to think of cinema as an extraordinary invention while watching films screened on large walls. "This is because the power of cinema on viewers is more significant than following innovations," he reiterated. Later, the first Hollywood films caused a stir in the movie world. "Cinema changes lives, clothing styles, habits, faiths, world perspectives and life styles of people. It affects everything greatly. There is a love affair between films and their viewers," Akçura said.