White God: A striking analysis of man vs nature 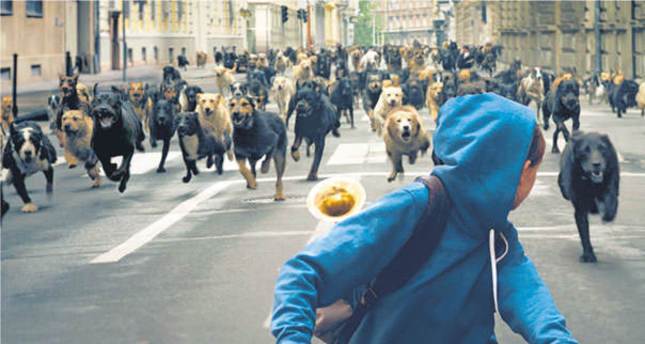 by Miraç Tapan Oct 20, 2014 12:00 am
Organized by the Istanbul Foundation for Culture and Arts (İKSV), Filmekimi has once again managed to bring together movie buffs and critically acclaimed films. Every October for the past 13 years, the event has aroused excitement among film festival followers because most of the films featured in the festival are rarely screened at theaters in Turkey. The tickets for the films were sold out days before the sessions and film enthusiasts waited in long queues to buy extra tickets. "Féher Isten" (White God) was one of the films that attracted more film lovers than the cinema hall could handle. Written by Kornel Mundruczo, Viktoria Petranyi and Kata Weber, "White God" is directed by Hungarian Kornel Mundruczo. Awarded the Un Certain Regard Prize at this year's Cannes Film Festival, the Hungarian film is also nominated for the Best Foreign Language Film Award at the 87th Academy Awards to be held in February 2015. In his sixth feature film, Mundruczo focuses on man's eternal struggle with nature. The film criticizes man's desire to rule over all living beings in order to serve his purpose. "White God" stars a mixed-breed dog named Hagen, which feels so much pain that the film is reminiscent of a Yeşilçam movie featuring similar sufferings. The film starts with a flash-forward where Lili, Hagen's 13-year-old owner, is chased by a pack of wild dogs on the empty streets of Budapest. Accompanied by enthralling background music, this slow motion scene creates a tension among the audience and makes them wonder what drove the dogs insane. The scene, featuring hidden violence, suddenly diverges into a happy moment of a teenage girl and her dog playing before jumping to another scene filled with the blood and terror of a slaughterhouse. Such shifts in tone as well as the flash-forward in the beginning set the moon of "White God:" One cannot sit and watch this film peacefully.

Thirteen-year-old Lili is forced to live with her father for three months as her mother and step-father go to Australia for a conference. As soon as her father, a former professor, sees her dog, he expresses his disgust. Hagen is despised wherever Lili takes him, whether it be her father's apartment or her music class. The film highlights a metaphor of racism through Hagen, and the film's characters, like a judgmental woman in Lili's father's apartment, make Hagen an outcast simply because he is not a pure breed. Furthermore, the government introduces a law that imposes a tax on owning a mix-breed dog. Unwilling to pay the tax, Lili's father sets Hagen free. From that point, the film takes an irritating turn especially for animal rights supporters. Although Hagen is able to escape from a group of sinister people, he finds himself in the hands of a cruel dog fighter. Hagen, or Max as his new owner calls him, is mistreated in order strengthen and teach him how to hate people as well as his own kind to be successful in fights. Hagen's identity crisis goes hand in hand with Lili's teenage rebelliousness. She begins to hate her father for abandoning her dog, begins taking drugs and gets arrested for drug possession. The last part of the film makes the audience question the thin line between the psychology of humans and animals. Being caught by officials after escaping from a dog fight, Hagen no longer has to endure abuse and leads an uprising with his fellow mutts at the dog pound. At that point, Hagen acts less like a dog and more like a human, avenging those who mistreated him throughout the film. The mongrel dogs that had been suppressed all their lives conquer the city and this time they rule over humans. Fearing for their lives, citizens of Budapest lock themselves in their homes while Hagen and his gang kills the people who wronged them. In the end, the dogs - representing nature - send one important message: They may kneel before humans, but humans, even the most prejudiced, also kneel before them.