Greek films to be screened in Istanbul until May 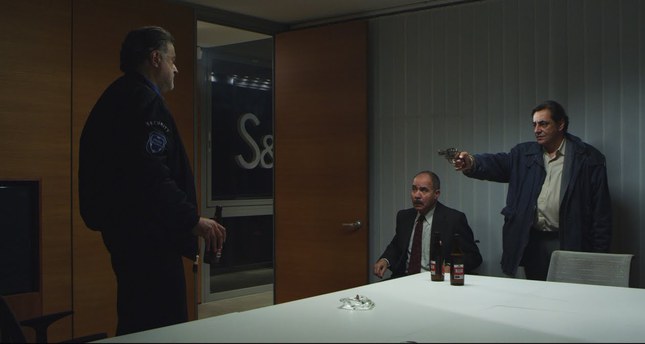 The Consulate General of Greece in Istanbul will screen a series of Greek films at Sismanoglio Megaro in Pera, which also offers courses in modern and ancient Greek, library facilities and exhibitions for those who are interested in Greek culture

Organized by the Consulate General of Greece in Istanbul and the Greek Film Center, Contemporary Greek Film Screenings continue to bring fine examples of the latest in Greek cinema to the silver screen at Sismanoglio Megaro. The series of events that commenced with the screening of Nikos Panayotopoulos' "Athens-Istanbul" in November will run until May 2015. The films all include Turkish subtitles and the screenings are free of charge.

Directed by Filippos Tsitos, the 2011 film "Adikos Kosmos" stars Antonis Kafetzopoulos, Theodora Tzimou and Christos Stergioglou and brings together the themes of love, honesty and justice in Athens as well as demonstrates the clash between morality and innocence and honorableness and dishonorableness. One day, Sotiris, who is an examiner in a police station, decides to pardon all the suspects in the station. He even kills a corrupt security guard to save an innocent man, and the only witness to his crime is the cleaning woman, Dora, who lives alone in poverty. Although Sotiris and Dora like each other, life does not continue as planned.
When: Dec. 23.

'O Ehthros Mou' (The Enemy Within)

The 2013 production "The Enemy Within," directed by Yorgo Tsemberopoulos, stars Manolis Mavromatakis, Maria Zorba, Yorgos Gallos, Antonis Karistinos and Thanassis Papageorgiou. Known for his films featuring Athens and Athenians, Tsemberopoulos directed the film after a 12-year hiatus. Considered one of the best examples of new age Greek cinema, the film focuses on a family whose life turns upside down after financial and social collapse. Kostas Stasinos leads an ordinary life with his wife and two kids and runs a small shop, but one night, he is confronted with violence when burglars invade their house. His calm nature and political views changes entirely after this traumatic experience and he seeks revenge.
When: Feb. 20, 2015.

Politiki Kouzina' (A Touch of Spice)

The 2003 production "Politiki Kouzina," directed by Tassos Boulmetis, features Turkish actors Tamer Karadağlı and Başak Köklükay along with Georges Corraface, Leroklis Michaelidis and Renia Louizidou. Fanis, a Greek growing up in Istanbul, is trained to be an excellent cook and uses his talent to add flavors to people's lives. When he returns to Istanbul after 35 years to see his first love and his grandfather, he realizes that over the years, he has forgotten to put a little bit of spice into his own life.
When: March 20.

Directed Babis Makridis and starring Aris Servetalis, Efthymis Papadimitriou and Lefteris Mathaiou, "L" is about a 40-year-old man living in his car. Although he does not have much spare time, the man tries to spend every minute of it with his family. He meets up with his wife and children in car parks at a specified day and time. His job is to find and bring the finest honey to a 50-year old man. When a new driver shows up, the man gets fired. The man, whose life changes, finds it absurd that no one trusts each other anymore. The film also marks the first feature length film debut of Makridis.
When: April 17.

Directed by Pantelis Vulgaris, the 2004 film stars Damian Lewis, Victoria Haralabidou and Andréa Ferréo. Set in 1922, photographer Noman Harris and Niki, who seeks a better life, travel on the same boat to the U.S; however, while Norman is travels in first class, Niki is in third class. The boat carries nearly 700 "letter brides," each carrying a photograph of their groom that they have never met before and a cheap wedding gown. Impressed by the melancholy and the colorful image of brides, Norman asks the captain's permission to photograph the uncertain and anxious faces of the brides. He soon falls in love with Niki, one of the brides-to-be who is a hard worker and a tailor along on the trip for the passengers and crew. "Nyfes" is about strong emotions, paradoxes and responsibility.
When: May 8.