US theaters pull 'The Interview' after hacker threats 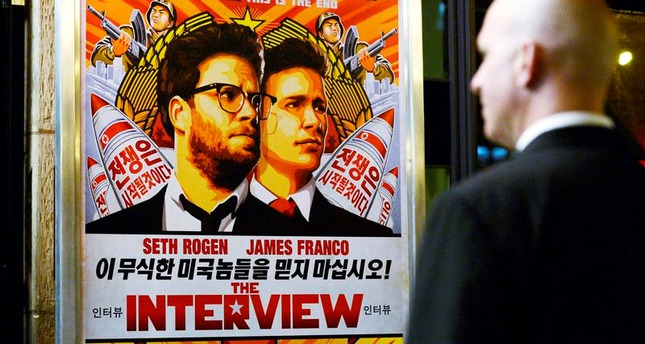 by Daily Sabah with Agencies Dec 17, 2014 12:00 am
US' top five theater chains have decided not to show "The Interview", a Sony Pictures comedy about the assassination of North Korean President Kim Jong-Un, following a threat believed to come from the same group claiming responsibility for a devastating hack against Sony.

Carmike Cinemas, operator of 278 theaters in 41 states, informed Sony late on Tuesday that it would not show the film, the person said. Carmike executives were not immediately available for comment on Tuesday evening, a spokesman said.

The New York premiere of "The Interview" also has been canceled due to threats from the hacking group.

A spokeswoman for Landmark, which was to have hosted a premiere of the film at its Sunshine Cinema in Lower East Side, New York, on Thursday, said by email that the screening had been canceled, but did not explain why.

California's ArcLight Cinemas, which runs five theaters across the state, said it won't show the film, but a spokesperson later said no official decision had yet been made.

A Sony spokeswoman had no immediate comment on the threat.

Sony executives had earlier told theater owners it would not pull the film but added they would not object if they decided to cancel screenings, according to a person familiar with the discussions.

An official at the U.S. Department of Homeland Security (DHS) and another U.S. security official said investigations had found nothing concrete so far to substantiate the threat.

"At this time there is no credible intelligence to indicate an active plot against movie theaters within the United States," the DHS official said.

Police departments in Los Angeles and New York, however, said they were take the warning seriously.

Los Angeles Police Chief Charlie Beck told a news conference that officers would be taking extra precautions to make sure movie theaters were "as safe as we can make them". He said the threats were "done to put terror" into U.S. audiences.

The North Korean government has denounced the film as "undisguised sponsoring of terrorism, as well as an act of war" in a letter to U.N. Secretary-General Ban Ki-moon.