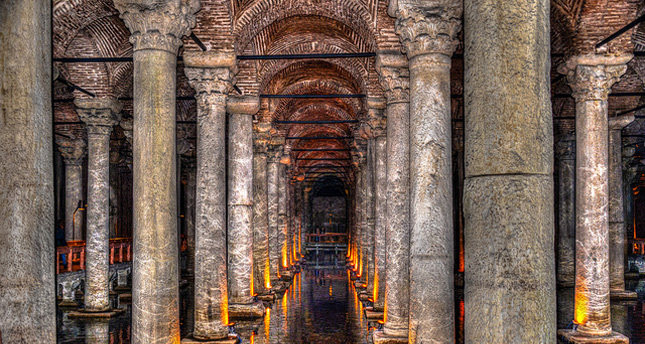 Built in Constantinople during the reign of Byzantine Emperor Justinian I to provide drinking water, the Basilica Cistern is increasingly grabbing the attention of local and foreign film directors along with millions of tourists with its inverted Medusa heads and magnificent columns

Opposite to the Hagia Sophia in Sultanahmet Square, the cathedral-sized Basilica Cistern, built in 542 A.D., covers an area spanning 140 meters long by 70 meters wide. Visitors reach the underground cistern via a 52-step stone staircase. There are 336 columns, each one 9 meters long. On the northwestern corner, the heads of Medusa, which form the bottom of two columns, are recognized as one of the masterpieces of Roman-era sculpture. The mystery about how these heads were brought to the cistern, however, still remains hidden.
.
Tourists from around the world cannot leave Istanbul, the heart of three empires, without paying a visit to the Basilica Cistern, which opened to visitors in 1987 following thorough maintenance works. This year, 2.1 million local and foreign tourists reportedly visited the attraction.

Cihat Çoşkun, manager of the Basilica Cistern, told Anadolu Agency that the heads of Medusa, freshwater fish, wish pool and the column of tears are what draw the most attention. Operated by Kültür A.Ş., the metropolitan municipality's cultural enterprise, the cistern also hosts national and international events.

In recent years, the historic place has served as a setting for foreign films such the latest James Bond film "Skyfall" and Oscar-winning actor Russell Crowe's drama "Son Umut" (The Water Diviner). Çoşkun also said that the cistern might be one of the places where a new film adapted from Dan Brown's "Inferno" will be shot. "There is no clear and official word on this issue. We do not know the film's schedule or when it will be shot due to privacy," he added.

A preliminary meeting also took place with Japanese filmmakers for a film about the Ottoman frigate "Ertuğrul," which sank 124 years ago and killed more than 500 sailors. "The film will focus on Turkish and Japanese relations and is planned to begin shooting in June. Officials of a production company asked for information about the cistern," Çoşkun said, adding they gave necessary details about the conditions of shooting a film in the cistern. An official request is expected in early 2015 and approval from the presidency is required since it will be an international production.

Çoşkun noted that the cistern has been visited by more than 2.1 million tourists - an increase from 5 to 10 percent over the past two years. "In summer, we receive more tourists. We are expecting 2.2 million tourists next year. Tourists flock to Istanbul during Christmas, and Europeans generally prefer to visit museums," Çoşkun said. Moreover, Çoşkun underscored the protection of the carp in the cistern's pool.

"We pay particular attention on preserving these freshwater fish as much as possible. They could die if you put them in very clean water, but we prevent this by transferring them with their own water to another place prior to the cleaning of the pool. They are protected under special conditions and regulations," Çoşkun concluded.